How would a Dyson Swarm transmit energy to the Earth?

The Dyson Swarm is common in sci fi as an energy source, and sometimes also as a powerful weapon. As it is commonly understood, it harnesses the energy of the sun, which stores a vast amount of energy. A Dyson Swarm is necessary for any civilization to be deemed Level I or II on the Kardashev Scale.

However, I quickly realized a small flaw in this design: it is not stated how the energy from the sun could be transferred to the planets whose civilizations need it, especially our Earth.

I believe that this issue should be resolved for the concept to truly work. Therefore, I ask, if Dyson Swarms could even be created, how would the stored thermal and light energy be transferred to respective planets?

PS: Thanks for people pointing out that Dyson Spheres are habitats, not just energy collectors for planets.

Don't believe me just because I'm saying this. NASA and JAXA have made some baby steps in that direction. And anyway any Dyson sphere that sends its energy elsewhere is based on this idea.

Also, don't worry about dying from being shot with space lasers. The wiki article linked in the paragraph above says:

Contrary to appearances of SBSP in popular novels and video games, most designs propose beam energy densities that are not harmful if human beings were to be inadvertently exposed, such as if a transmitting satellite's beam were to wander off-course.

You've missed the whole point of a dyson sphere

There are no planets to transfer the energy to. A dyson sphere would have a living space equivalent to around 550,000,000 times the surface of the Earth.

The variant of the Dyson sphere most often depicted in fiction is the "Dyson shell": a uniform solid shell of matter around the star. Such a structure would completely alter the emissions of the central star, and would intercept 100% of the star's energy output. Such a structure would also provide an immense surface that many envision would be used for habitation, if the surface could be made habitable.

Finally you wouldn't want to be outside anyway as there is no longer a sun for the planet.

Transmission of power is near future SF and well and good; yes, yes. Goldeneye and all. Tesla.

Another option would be to lock the energy into a portable form and bring chunks of it home. This is akin to liquefied natural gas or other concentrated energy sources that are more portable and less dangerous for being concentrated.

The most concentrated fuel would be antimatter. Space is a good place to be fooling around with antimatter because of the go boom prospects. Operating according to E=mc2, raw solar energy is turned into antimatter. Antimatter pellets in their magnetic bottles are stored in space then ferried down to earth on an as needed basis to power generators. 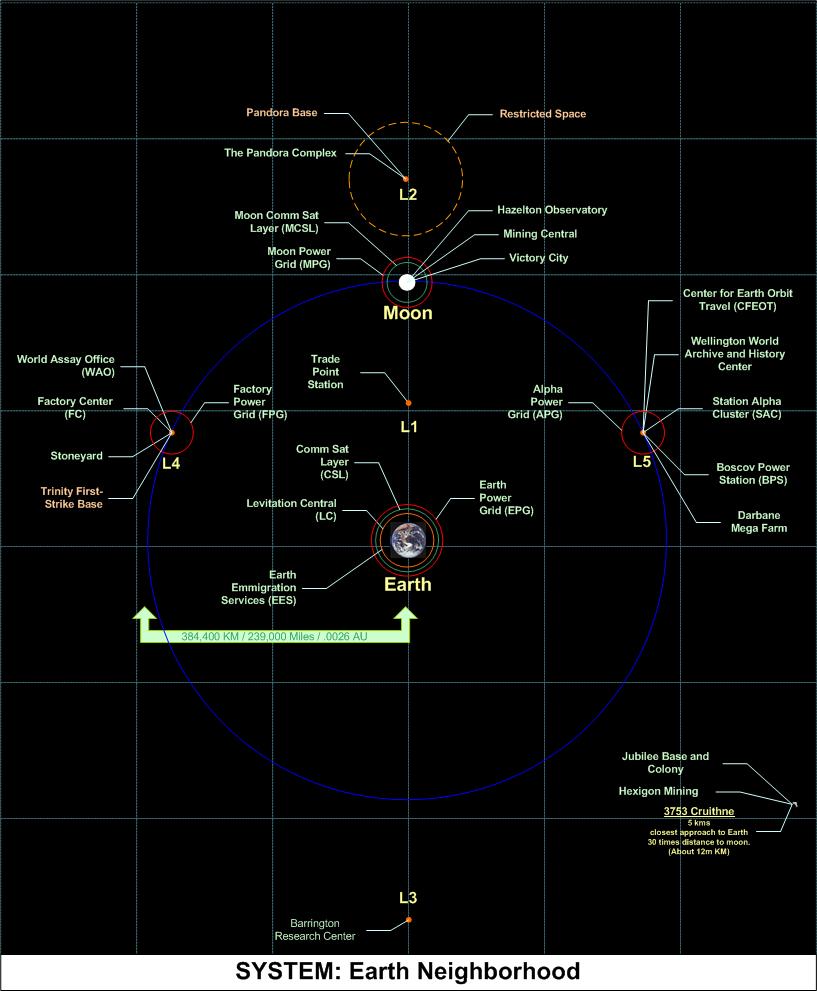 You do not need wires to transfer power. See this article: https://en.wikipedia.org/wiki/Wireless_power_transfer

The interesting thing about transmitting power from space is there is no nighttime down-time. The power station just needs an orbit where it can transmit to the groundstation as the planet spins.

The red circles are space based power zones for my space game.

A simple one would be to use an orbiting swarm of mirrors.

The angle of the mirrors could be adjusted to reflect 'natural' sunlight towards earth, where it could be captured for use.

This would be the simplest method, as the satellites would be relatively easy to manufacture so you could mass produce them. They would also be simple to operate and have little to no maintenance - if it was a mirror all you need is a way for it to rotate (perhaps a gyroscope) to reflect light.

An onboard computer (or centralised computer if you don't want complexity in each one) could calculate the optimum angle to maintain altitude, positioning and trajectory to ensure the swarm is stable. The reflection of the sunlight would change the satellites trajectory, and balanced with gravitation forces, and thus needs to be coordinated.

If the radius of the swarm is roughly the same orbital distance to Earth, it is conceivable that almost all of the sunlight from the Sun could be diverted to Earth. If they are closer to the Sun you may need to get complex and reflect light of other satellites to then reflect it onward to Earth.

This naked sunlight would be then converted to useful energy at a focal point either on Earth (which would likely not be good for Earth) or near Earth (perhaps L1) where it could superheat mass to generate power, fuse atoms or other methods of power generation from extreme concentrated heat and radiation.

As far as I can find, no one has taken on the concept that you can't actually beam all that energy to the earth without turning the earth into an ant under a magnifying glass. Harnessing wind or solar power doesn't change the energy on earth, we're just moving it to motors and microprocessors where its heat moves back to the atmosphere. But if you somehow beamed all the energy of the sun to the earth, we would also need a corresponding method to gather and beam all the excess heat back into space so we wouln't burn the planet to a crisp.

I find it much more likely that we would be harvesting the energy from the earth's core well before we tried to gather it offworld from the sun.