I'm writing a thriller story about a group of explorers who traveled to a distant planet in the hopes of finding intelligent life, when the explorers arrived they discovered a planet that was full of vegetation and dense forests but could not find any signs of animal life, a team of scientists who were part of the group concluded that complex life forms have not yet evolved on this planet and that they were completely alone. After a long day of exploring the team headed back to base camp.

However at night strange noises were heard outside the camp which frightened the explorers.

they eventually discovered that the planet was inhabited by hostile cybernetic trees that were designed by an advanced civilization whom arrived on the planet before them.

As mentioned in the title the trees are cyborgs and have robotic endoskeletons, while the outer layer is covered with trunks and branches from a type of oaktree. Power is generated through artificial photosynthesis which converts sunlight into electricity.

I would like to know whether the idea of cyborg Trees is feasible and whether there could be some complications with such a design. 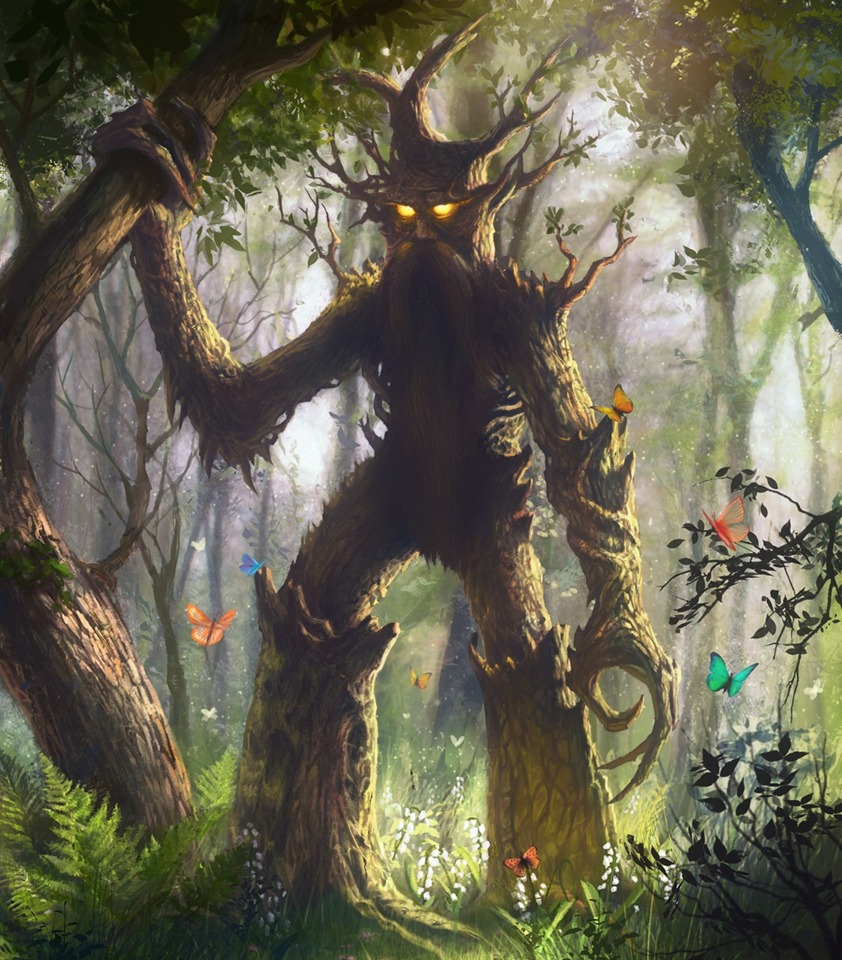 Wood is a natural composite of cellulose fibers that are strong in tension and embedded in a matrix of lignin that resists compression.

If the cybernetics instead of being a robotic endoskeleton are much smaller and refined and permeate and largely replace the lignin in the wood, the wood would lose its natural rigidity and instead bend with the cybernetics. The tree could uproot itself and walk.

This would damage the roots but they could recover if the cybernetic structures stores water and nutrients for the tree to survive while the roots heal. You'd probably want some underground cybernetics to protect the roots when uprooting and to allow the cyborg tree to dig in when re-rooting.

Cybernetics would also permeate the bark of the tree. This could work as on armor against damage. It would also get the cybernetics close enough to the surface to get energy from sunlight. Possibly from the green light that filters thru the leaves of the canopy.

Alternately or additionally the cybernetics could have a symbiosis with the tree. It would use energy produced by the tree in exchange for improved water transport and possibly artificial roots that can dig thru the soil instead of just growing. This would also compensate issues caused by reduced lignin to water transport and occasional uprooting to the roots, so doing this would make sense even if you have solar cells.

This would potentially allow the cyborg to grow higher (since water transport is a major limiting factor) than normal oaks and in soils hostile to normal trees. For example cybernetics do not require air, so flooding would not be an issue. Likewise soil contamination by toxic pollution would not kill cybernetic roots. The tree could also grow older since cybernetics could fix damage overtime. The cybernetics could also actively kill parasites including bacterial and fungal infections. Even if it cannot detect bacteria it can detect and sterilise infected plant tissue and then let the plant grow back to fill the void.

These benefits offer a possible reason for someone to bother creating these cyborgs. Maybe they are not there to guard the trees from visitors but to allow the species to survive a devastating and rapidly mutating fungal disease. Or severe toxic contamination issue the aliens felt responsible for. So they reprogrammed and re-purposed something they already had available.

Like those military nanites designed to wipe out entire planets that never got used because the Emperor preferred to blow up the planets instead. Or maybe they just threw out the useless obsolete junk before it activates on a planet they are on.

Or maybe they just wanted a nice tree that grows taller than normal, is resistant disease, floods, and drought, can escape forest fires, can last for millennia without needing replacement and looks really nice in front of the porch. Also sends a text if neighbour tries to "borrow" the lawnmower.

Trees do not have legs and arms though. So it wouldn't really walk or fight like a treant. Instead the roots would slither like a knot of different sized snakes on speed. They'd also fight by entangling and eventually constricting their prey like a mix of an octopus and a constrictor snake.

The cyborg might also reasonably have access to chemical or dazzle weapons. Microwave or sound based attacks might also exist. Reasonably these would be powered up tree-to-tree communications systems. Although the chemicals might be pesticides.

So as other people have been mentioning plants are pretty rigid and bad at moving. At the most basic level their cell walls are very rigid and there are barely any plants that move at a significant speed (https://en.wikipedia.org/wiki/Rapid_plant_movement) and most of those use a temporary trigger you couldn't use to walk. Not to mention their electrical signaling is very slow and not really comparable to a true nervous system. (https://blogs.scientificamerican.com/observations/plants-cannot-think-and-remember-but-theres-nothing-stupid-about-them-theyre-shockingly-sophisticated/). They'd probably need to connect all of the cells into an artificial nervous system right down to the cell if they wanted a true cyborg experience. Plants also tend to trade off structural integrity (like the wooden trunk) and mobility (like a fern). But potentially they could get the creatures to make softer cells around joints. Or just make it a fern (or leaf or something else)-based plant around the endoskeleton. You are kind of running into a wall of at what point are you a cyborg and at what point are you a robot covered in a certain quantity of plant cells. What about something that's much more alien but the travelers interpret as a tree? If we found something that looks close but with a totally different biology that's probably where our brains would go to.

I have a two main problems with this design that I think can be worked around. Most of the time in Lotr type fiction moving trees could move because magic, but it seems like you want a more scientific approach.

Let's address the join issue first. Instead of having 1 tree, you could instead have 5 trees. One representing the body/head/shoulders/thighs and the other 4 other representing the limbs. In between the joint areas you could have your cyborg parts that do the moving. The multiple trees attach roots around the joint areas (yes the roots can be given nutrients via the cyborg parts) to hide them from seeing cyborg parts. I imagine the 5 trees to be setup like this 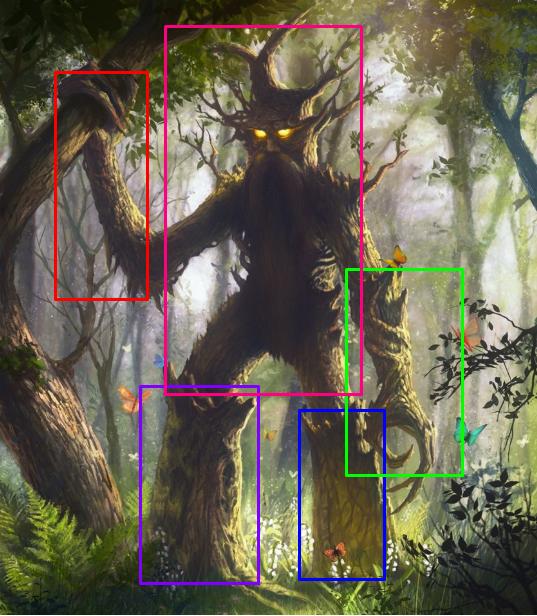 Now, you have "hostile cybernetic trees". To me, that means they are guardians, typically standing around doing nothing until something or someone enters their domain. I propose that the two trees that make up the feet, for the bottom or sole of the tree foot to be entirely metal. The reason for this is because when at rest, the feet can inject synthetic roots into the planet, connecting itself to the other trees in the area via a vast root network. Allowing the cyborg tree to siphon resources from the other trees in the forest giving it the energy to fight outsiders.

This ensures that the cyborg tree is always juiced up with energy, ready for a fight and the cyborg doesn't shatter all its branches when attempting to move around.

Other than that, I generally like the idea of mixing machine and nature in fiction.

There seems to be a lot of terminology confusion in this post.

I would assume a cyborg tree is a sentient tree that has cybernetic enhancements, just as a cyborg human might. With that description I imagine you just have to get over the plausibility of sentient trees and then there is no reason this wouldn't work.

What you actually describe though sounds like non-sentient robots covered with tree. The only aspect that implies the tree around the robot is alive is that photosynthesis is taking place to produce electricity, however that would be way less efficient than just putting solar panels on a regular robot. Is there some reason that the robots have to look like trees? Is there a reason they have to use photosynthesis?

At this point, I'm going to say there are a lot of issues, with the bottom line being that it just doesn't really make much sense without a lot more explanation.

Not the answer you're looking for? Browse other questions tagged science-based biology creature-design bio-mechanics cyborg .

7
How would a dead cyborg differentiate itself from a robot?
2
Theoretical limits to a cyborg body?
13
How do you power a cyborg?
25
How quickly could a cyborg determine that a bullet has been fired from the sound alone?
2
Cyborg adaptation to a high pressure environment
8
Are Extraterrestrial's pagoda trees plausible?
7
Foraging behavior of a forest slime
5
How to Cause a Hydrosphere Apocalypse Part I The Great Drought
15
Does a cyborg have the need for a toilet?
8
A sentient brain organism with "Cyborg" prosthetics for its body made by humans, feasible?