What traits would a species need to survive in magma?

How might such a species evolve? How would they swim, navigate and breed? How big could they grow, and what complications might arise out of their growing very large?

I think an alternate biochemistry might be what you're after. On Earth, we already have extremophiles that, while they retain carbon-based biochemistry, have entirely different metabolic systems. Though their biochemistry is carbon-based, they do contain some variants of the "normal" carbon biochemistry: such as the use of ether lipids rather than ester lipids in their membranes.

Silicon-based, rather than carbon-based, life has been a minor mainstay of speculative fiction for quite some time. It has chemistry similar to carbon, though with much greater rarity of the multiple bonds ("unsaturated" compounds) upon which so much carbon chemistry depends. Because of this, the existence of silicon-based life at STP would be pretty much impossible.

Still, silenes (containing Si-Si double bonds, analogous to carbon-based alkenes) and silynes (containing Si-Si triple bonds, analogous to carbon-based alkynes) can be prepared, and the extreme environment of a magma ocean might even be used to explain their greater prevalence than in a lower-temperature aqueous environment like Earth.

Silanes (containing only Si-Si single bonds) and siloxanes (such as "silicones" used as adhesives and sealants) already provide a rich pseudo-organic chemistry. Add the conditions necessary for easy formation of Si-Si double and triple bonds, and throw in some P-P double and triple bonds (P could serve, in a Si-based biochemistry, much the same purpose N serves in carbon biochemistry, with a little imagination) and you have a biochemistry easily diverse enough to support living systems of some complexity.

I'm not sure you'd want to go as far as the crystal-based biochemistry of Sentenced to Prism, but if you're exploring alternate biochemistries, you should definitely read it.

Another take on silicon-based biochemistry (synthetic, this time) is Star Chase (not to be confused with the Saxon Andrew series of the same name), though it's distinctly pulp-grade writing (and, I believe, was published as three separate titles at the same time by a pulphouse, though I can't recall the specifics). [Edit: the specifics! It was plagiarized from Escape Across the Cosmos.]

There are three main issues with living in Magma:

The first of these is probably the main one, as life has adapted to many extremes of pressure. We don't know of any organic material capable of surviving these conditions though - let alone viable lifeforms.

They probably couldn't. At least nothing like earth's surface life. Some conditions are just too harsh for anything like our kind of life.

The things traditional life are made of are just too flammable and rely on water.

Wikipedia might be able to help here... Silicon and silicon dioxide can stay solid well into the 1000°F range. That said, they are so abundant on Earth, if life could have evolved spontaneously in underground magma, it would have.

The biggest issue with living in magma is the lack of temperature difference. Plants take energy from the sun because the sun is very hot compared to the Earth; heat engines can't work if the temperature is the same everywhere.

Processing any sort of chemical energy in magma would be very difficult as most of the chemicals present are already in a low energy state.

Perhaps you need another species to create some sort of temperature difference (e.g. they put sea water into the magma to create steam for an energy project). Either they happen to create some sort of imbalance that also has all of the pre-constituents for silicon based life, or they set out to have a life-like solution for their project that then evolves.

For a non-Earth-like environment, perhaps the planet's sun is so close or hot that the surface is always molten. Then you have temperature difference and liquid chemistry. Carbon based life would not be able to interact with these creatures.

It can't happen with life as we know it. There are extremophiles that have evolved to handle high temperatures, but we haven't seen anything surviving temperatures above 122 °C. One of the reasons why they can't go higher is mentioned in that article:

it is thought unlikely that microbes could survive at temperatures above 150 °C, as the cohesion of DNA and other vital molecules begins to break down at this point.

So what would it take to prevent a creature's internal temperature for reaching that temperature? Very good insulation, and that would still only allow it to live in magma temporarily. There is no such thing as perfect insulation - a vacuum is close, but even then there's black body radiation causing some heat transfer. The higher the temperature something is, the more energy it will give off as black body radiation. Your creature wouldn't be able to use a vacuum anyway - the pressure it would need to resist would easily crush a vacuum unless the shell was made of handwavium.

A sufficiently thick exoskeleton might be able to protect the creature, but that would be impractical because the thickness of the exoskeleton would render it immobile.

So there's no way to protect the creature from the heat levels, and it can't have DNA at that heat level. You need something completely unlike all life that we know of. It's not going to evolve from anything with DNA - abandoning DNA and switching to something else would be completely losing 3.5 billion years of evolution.

If it is possible, it would have to be a life form based on a molecular biology that we are currently unaware of. If you really want there to be something that lives in magma, you're going to have to handwave the explanation in one of two ways. The first is to have it be a life form that uses silicon (or some other element) as the fundamental element of its biochemistry instead of carbon. The second is to not attempt an explanation, which could be lamp-shaded by having someone say that they have no clue how in the world it is possible for such a thing to exist. In either case, no known biochemistry can fully explain how this could be possible.

The concept of a creature on Earth surviving in magma was explored in an NBC television series called Surface. (Unfortunately, it was cancelled after the first season.)

There we met a member of the species, whom the main character named Nim: 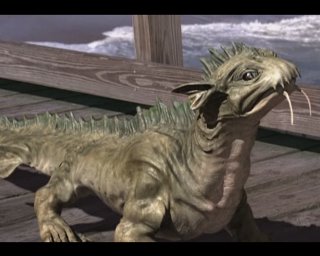 These creatures can get pretty big. Here's a full-grown relative: 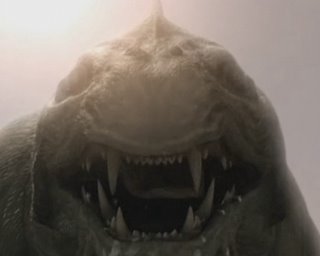 These creatures are amphibious, heat and pressure resistant, and they can produce electricity in much the same way as an electric eel. Nim's species might be some form of offshoot from an ancestor of the eel, one that migrated downward in search of warmer waters around volcanic vents. Over the eons, the creature developed an affinity for the magmatic environment within the vent, but returned to the ocean when it needed to lower its body temperature.

Nim and his family have claws and teeth, so anything they can catch they can consume. Sharks have a multitude of senses for navigating, ranging from the ampullae of Lorenzini to the lateral line. Since these are highly effective, it is feasible to believe that Nim's family would develop something similar.

In the Surface series, some members of the species were thought to be larger than whales. Their activities in the ocean caused an earthquake that led to a tsunami and brought the species to the surface.

Realistically, creatures would not evolve to live around magma - there are much more hospitable areas for creatures to form that offer a great deal more than the magma can offer.

If they have no choice though, and you want such creatures to exist...

One thing that would make Magma appealing is an evolutionary ability to generate energy from heat - most creatures and plants can only absorb energy from sunlight, and don't directly convert energy to heat, but with such an abundant heat source, your creature might. This would suggest a skin that is highly conductive to absorbing energy - possibly scales. But they would also need a tremendous ability to remove that heat, so that they can absorb it again, or else there'd be very little net gain.

This creature would also have the issue of its organic matter being cooked by the extreme heat - being silicon-based might help that, but we have no silicon-based lifeforms to test that against. Alternatively, they could be large, or have large extraneous body parts to help dispel heat (A tail, or perhaps a large gas-expelling organ on top of their bodies that could evolve into a flight ability). Or you could have them breath out the heat in large bursts like...well, a dragon.

Complexity would be an issue though - any sensitive organs would be extremely vulnerable, either to the varying levels of heat in the Magma, or any sudden drops of heat, such as when the magma eventually cools. Either one of these would wreak havoc on sensitive internal organs.

Magma-based creatures are not practical, especially on a planet with alternative options. But with no other options available, life might find a way.

Not the answer you're looking for? Browse other questions tagged science-based biology evolution creature-design or ask your own question.

7
How can a lava-eater metabolism explained?

9
Multiple types of life forms of the same species
2
What adaptations would a water-dwelling species need to survive by primarily hunting pre-industrial humans?
7
What would it take to make this “Big cat” species evolve hands?
5
If 50 members of a species were given intelligence, how long would it take to evolve?
16
Would there be any major disadvantages for a species to have six legs instead of four?
9
Anatomically Correct Swarm of Rodents
5
What would a matriarchal intelligent species look like?
9
What environmental factors would cause bipedalism underwater?