Rejoining body parts: How would it work?

Reattaching severed limbs is a recurring theme in many monsters, but never has it been explained HOW they reattach their appendages. I doubt the neurons would magically realign and begin to function normally, not to mention the exposure to bacteria and impurities that would risk infection. Whatever the method, reattaching the limb is definitely more energy efficient than regrowing it from scratch.

Some put their arms back together and wait for it to reconnect while others sprout a tentacle that links the severed pieces. Even trickier is reconnecting the head, which some invincible monsters but back on effortlessly.

I think your self-repairing monsters' immune systems are very robust and protect them from bacterial infection. Their immune systems also might have several innovations. For example, we have a limb torn or bitten off, the stump swells immediately and blood vessels and arteries constrict. This is an automatic response to stop us from bleeding to death. But, that same swelling is counterproductive to healing when we merely get a deep cut or bruise since it slows the flow of blood carrying nutrients and such needed to repair the injury.

Instead, these self-resembling monsters, when they lose a limb, the body prepares itself for reattachment by flooding the area with a healing factor that stimulates tissue growth. If the limb is gone, it can regenerate, and if it is only lying on the floor its can reattach itself.

If the severed limb moves on its own, then the motor neurons controlling the muscles are part of the limb, and not in the brain like us. Our hearts are like this. The brain doesn't directly control the throb in our breasts. That is why a human heart can be transplanted and still keep beating.

And, maybe, there are a whole bunch of tiny brain-like structures in each limb that lie dormant until the limb is severed. But, their function is like a blind pup searching for its mother's nipple and will twist and turn and flop about to help the limb align.

And for the hard part, how the muscle fibers and nerve fibers realign themselves?

The image below is a long-chain molecule. There are lots in nature -- our DNA, and polymers like Nylon and Teflon for example. 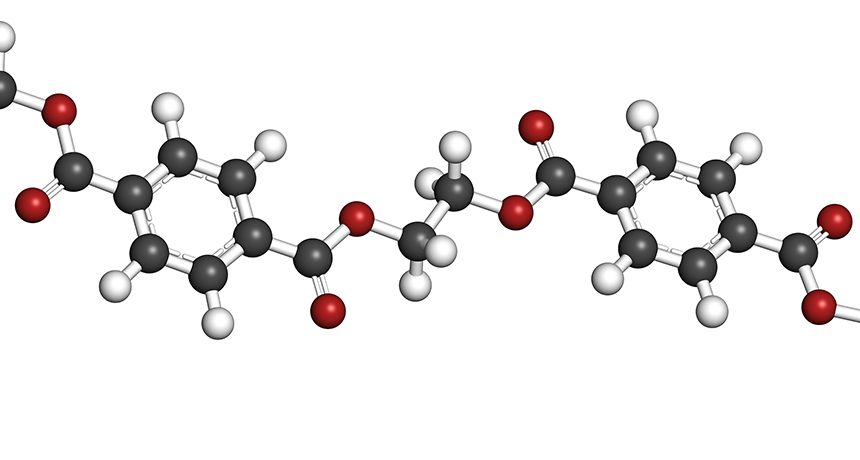 To me, it sort of looks like a key. Now, imagine it looped in a wide circle. I think that would provide a mechanism for aligning the severed edges of tissues. If each half of the wounded muscle group, nerve bundle, blood vessel, etc was the other sides molecular complement then until the sections lined up, ionic forces would be weak. But when the 'teeth' of the molecular keys did line up, the powerful attractive forces would pull the sections together.

You put your finger on the answer in the question. No monsters who just push the severed body part onto the stump and have it reattach are adhering to biological principles. Once a body part is removed, reattaching it requires an active intelligence doing the work (ie. a surgeon), and permanent damage is still being done.

Creatures in nature who are prepared to lose limbs or body parts as defense mechanisms (some lizards, starfish, sea cucumbers, etc.) are not expecting to get them back, and have no mechanism to reattach them once lost.

So yes, a creature that can put a limb (or head) back on post-loss is using magic, or magic by another name (nanobots in the bloodstream, psychic surgery, etc.).

As far as I know, we do not know of any creature with a system to reattach severed limbs, because if you lose a limb, odds are that the same creature which separated your limb is going to finish you off. So if you want the creature to be plausibly "natural", you will first need to describe an environment in which it is likely to lose an entire limb, but also able to retrieve it mostly intact. Perhaps these creatures live in an environment with very sharp, glassy rocks which are easy to slip on, so that the main threat isn't predators, but rather accidental dismemberment.

Most creatures have an immune system, which is a population of mobile cells which travel to where they are needed in the body and attack stuff. At the same time, most creatures treat "repair" as: "close up blood vessels and grow new skin". However, there is no real impediment to developing a "reattachment system" which is similar and parallel to the immune system.

Of course, the main problem is alignment. I think expecting the limb to just attach and orient itself correctly is really stretching plausibility. So I would stick with a creature that has prehensile limbs and digits (i.e., primates). That is, you want the creature to be able to place the severed limb in approximately the correct location. Even so, "close" isn't really "close enough" to reattach small blood vessels and nerves.

For precision, you need some way to mark up the piping and wiring so the repair cells know what to do. Fortunately, biology is really just a giant wetware information system, and there are many, many molecules which will do the trick. Just about every cell in every creature expresses proteins on its exterior. The body uses these proteins to identify "self". Adaptive immune systems use them to identify "invader". The reattach system can use them to identify "blood vessel 4e7h". Yes, every nerve and blood vessel, every muscle, tendon, ligament, etc. can be coded with its own unique identifiers. However, you don't really need them to all be unique. You just need them to be "locally unique". The creature itself should perform most of the alignment visually. Then, a blood vessel just needs to be unique relative to the few other blood vessels within a few cm of it. Thus, tags can be reused around the circumference of a limb, as long as they are adequately separated. Also, different kinds of tissues can reuse the same tags, as the repair system will need to identify tissue types anyway.

When a tissue with one tag is placed next to a tissue with a different tag, it can cause a hormone release which triggers pain receptors. So when the creature is attempting to position the limb, it simply rotates and moves it around until it minimizes the "contact pain". Pain nerves will tell it when the alignment is off, but the closer it gets to proper alignment, the more the pain signal quiets.

We know that the adult body harbors pluripotent stem cells which can differentiate into any other cell type. So repairing virtually any tissue type in vitro is at least theoretically possible just using biology we know about today. Once the tissues are adequately aligned, these cells just need to go to work, taking on the proper tissue tags and rebuilding the severed connections.

New blood vessels and nerves form all the time, but perhaps the biggest challenge is muscle. While animals can grow new muscle from scratch, when a muscle is severed, I am not aware of any creature that can reattach its own muscle fibers to repair a break. I don't think it's biologically impossible, but we don't have any models for it. Fortunately, bones also reattach and heal on their own all the time, with nothing more than a splint or cast (and for wild creatures, not even that).

The last challenge is sepsis. Whatever got into the exposed ends of the severed limb will end up on the inside of the body once the limb is reattached. The creature needs to clean it as much as possible. This is going to sound gross, but the most obvious way to do this is to lick the wounds. For the detached limb, that is easy enough. For the detachment point, the creature might not be able to reach it with its tongue. Even so, it will need to lick its paw/hand/foot/etc. and try to clean the wound before reattaching. Once it does, the immune system will need to rally and attack the interlopers once they have the advantage.

While I can imagine such a system working for the loss of a single limb, I would imagine that blood loss and shock would prevent a happy outcome for multiple amputation. Of course, those limits are up to you, but real creatures which can "safely" lose a limb rarely lose more than one at a time.

Do your monsters have a circulatory system? one major problem in reattaching limbs is that the thrombolytic response (which causes blood to clot) starts to seal up wounds immediately after they occur to prevent you from bleeding to death. Then, the opposite of limb re-attachment happens--the severed part of the body is sealed off from the outside world.

Your monsters need to have a better way to stop themselves from bleeding out after injuries, so that all blood vessels and nerve endings and tissues can be kept in tact and ready for immediate re-attachment. This means a huge fundamental change to circulatory systems. Also, they would need amazing immune systems like previous posters have said, as their body would be exposed to the external environment if they do not have an innate response to seal their body off from the world.

If they are indeed monsters, or aliens, then maybe they do not have circulatory systems like humans do. Even on earth there are alternatives to blood vessels such as just having pools of haemolymph in insects. Haemolymph is not as efficient as blood and poses severe size restrictions (no human-sized insects today, my earthling friends). If you could imagine a reasonably viscous ultra-high efficiency haemolymph analogue, the viscosity would reduce the need for an immediate clotting response, though again decrease the efficiency of oxygen transfer. There are a lot of trade offs to consider in "designing" such a monster, but never say never. In general, the simpler and the smaller the organism is, the easier it will be for that organism to regenerate or re-attach its limbs.

25
How advanced or effective weapons can be created from mostly animal body parts?
13
How would tattoos on fur work?
5
How would a human like species be able to swallow body parts whole?
7
What parts of the human body would be negatively affected by sleeping upside-down?
5
Energy cost of creating body parts from nothing but energy
17
Regrowing body parts: What are the costs?
6
Uplifted animals have parts of their "brain" in various locations of their body. Where?
23
Can a creature sustain itself by eating its own severed body parts?
4
Could certain parts of someone's body have denser nerves than other parts?