I'd like to randomly generate between 1 and 20 million stars for a spiral galaxy resembling our Milky Way. This is of course far fewer than our galaxy (estimated between 150 to 300 billion), but I'd like it to resemble ours in proportion. Generating the locations so that they resemble a spiral pattern was a little challenging from a geometry standpoint, but I think I have that part settled.

Now comes the hard part. I'd like this galaxy to have a plausible mix of the various types/sizes of stars. It won't be a proper simulation (so that there might be close features that shouldn't be near each other) and I'm ok with that. But I'd like to have approximately the right number of neutron stars, singularities, red dwarfs, and giants within this galaxy

Some of these things aren't settled scientifically (how many rogue planets float around in the intergalactic void, or are there any actual quark stars), but many of these it seems like we should have reasonable estimates.

So, what are those? I'm looking for a statistical distribution of stellar masses/radii, color, spectral types, temperatures, etc. Ideally these might vary according to their distance from the galactic center, but I could live without that if it doesn't exist.

Does the information exist to accomplish this? Occasionally I'll find an offhand remark about how some large fraction of the Milky Way is composed of barely visible red dwarfs, or that there are an estimated 100 million neutron stars within MW. But these rarely provide hard numbers/ratios.

This has actually been an area of intense research for decades now. Astronomers are quite interested in the distribution of stellar masses in a variety of different galaxies and clusters. The precise mix you're going to get of course depends on the environment you choose; galaxies with higher metal contents will produce stars with higher metallicities. In general, however, you can take your pick of different initial mass functions, or IMFs. An IMF is a function that tells you what fraction of stars have a mass between $m$ and $dm$, where $dm$ is some step size.

The Salpeter IMF is a simple one, and it's great as a toy model. More realistic IMFs, like the Kroupa IMF (which is quite commonly used), are piecewise functions. They're also power laws, but the exponent is different over several different mass ranges.

If you want to play around, I've put some code on GitHub to let you play around with a couple IMFs (and generate stellar populations on your own, with some randomness thrown in). Here's a comparison of how stellar masses are distributed, according to the two IMFs I discussed above. The $y$-axis shows the fraction of stars $f(<m)$ with a mass less than $m$: 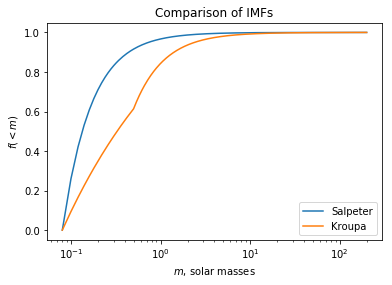 $200M_{\odot}$ is kind of an arbitrary upper limit, but in reality any population you synthesize will contain only a tiny, tiny number of stars with masses above $100M_{\odot}$. $0.08M_{\odot}$ is a realistic lower choice - it's the boundary between stars and brown dwarfs.

A couple things to bear in mind:

Right today NASA, on its daily APOD, has posted the following image 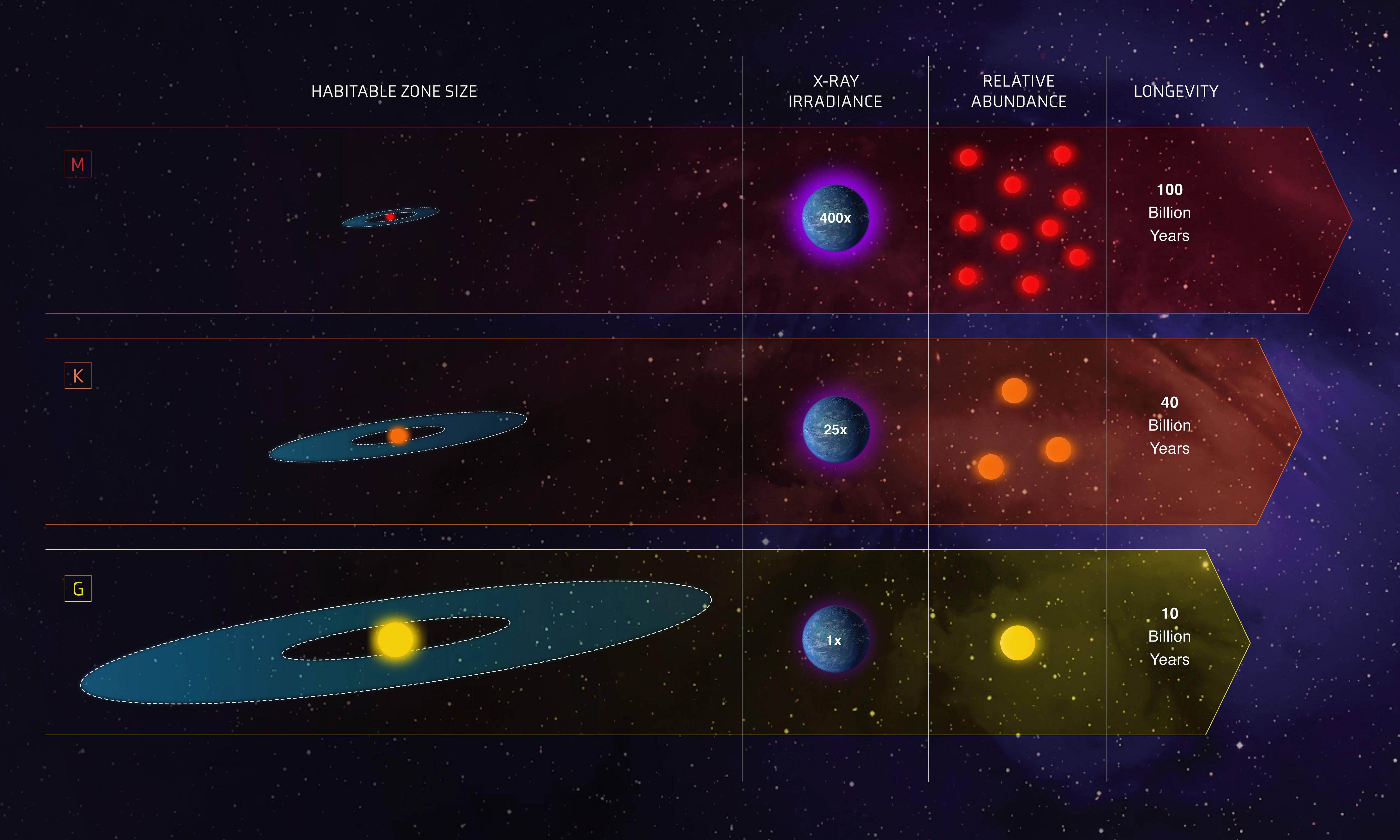 accompanied by the following caption

The Goldilocks zone is the habitable zone around a star where it's not too hot and not too cold for liquid water to exist on the surface of orbiting planets. This intriguing infographic includes relative sizes of those zones for yellow G stars like the Sun, along with orange K dwarf stars and red M dwarf stars, both cooler and fainter than the Sun. M stars (top) have small, close-in Goldilocks zones. They are also seen to live long (100 billion years or so) and are very abundant, making up about 73 percent of the stars in the Milky Way. Still, they have very active magnetic fields and may produce too much radiation harmful to life, with an estimated X-ray irradiance 400 times the quiet Sun. Sun-like G stars (bottom) have large Goldilocks zones and are relatively calm, with low amounts of harmful radiation. But they only account for 6 percent of Milky Way stars and are much shorter lived. In the search for habitable planets, K dwarf stars could be just right, though. Not too rare they have 40 billion year lifetimes, much longer than the Sun. With a relatively wide habitable zone they produce only modest amounts of harmful radiation. These Goldilocks stars account for about 13 percent of the stars of the Milky Way.

21
What kind of star should I use for my world?
9
What stellar number density would two galaxies have to have for another star to collide with the Sun during a galactic merger?
6
What would make a star good for star lifting?
9
Which type of star would be best used for a Shkadov thruster to reach Andromeda as soon as possible?
6
How could a galaxy be altered to house hundreds of thousands times more Stars?
6
Life and Galactic Age: What galactic ages make a planet habitable?
3
How Big Can the Habitable Zone Be in a G-Type Binary System?
3
Could neutron flux from a hotter primary star/keep a brown dwarf burning?
3
How to Create the Galactic Habitable Zone