Assuming a flat world and no obstacles, how far could you see?

I know this question has been asked in similar places, but I'm after a specific part of the problem. Assuming the following:

How far could a human see in all directions, before atmospheric refraction or other phenomena washed out any visible objects (i.e., mountains)?

All the answers I've seen so far have been set on Earth, and that is the very thing I'm trying to avoid. I'm tagging this with hard science, because the numbers matter to me.

Here's a first-order approximation based on a fundamental limit: diffraction and angular resolution.

How far someone can see of course depends on the size of the object they're looking at, because the main limitation we have is one of angular size. The issue comes down to something called the Rayleigh criterion, which is a limitation telescopes have to deal with - and it has nothing to do with the medium light is traveling through. Any circular opening will produce a diffraction pattern, with peaks and troughs of intensity. The best angular resolution you can get depends on how far apart the two inner peaks are. If the aperture of your telescope (or eye) is $D$, and you're observing at a wavelength $\lambda$, then your angular resolution is $$\theta\approx1.22\frac{\lambda}{D}$$ For a human eye, $D\approx9\text{ mm}$ when pupils are maximally dilated, so even if you're observing at really red (and therefore long) optical wavelengths - say, $\lambda\approx700\text{ nm}$ - then you can achieve an angular resolution of $\theta\approx9.5\times10^{-5}$ radians. If the size of an object is $h$, then the distance at which your eye can resolve $h$ is $d\approx h/\theta$. If we choose $h=2\text{ m}$ (roughly human-sized), then $d\approx21\text{ km}$. We can repeat the calculation for a bluer object (say $\lambda=300\text{ nm}$), and we get $d\approx49\text{ km}$.

Is this a reasonable model? I've made the assumption here that we're dealing with a diffraction-limited system. Any astronomer can tell you that in reality, if you're looking through several kilometers of air, your resolution is actually going to seeing-limited - that is, limited by turbulence and other atmospheric disturbances. Attenuation due to scattering and absorption is going to be a problem.

That's why I call this a first-order approximation. Calculating scattering and optical depth is, I think, beyond what I can easily do. Taking atmospheric effects into account will reduce the numbers I have here - and the amount of reduction depends on the atmospheric conditions. So consider this an extreme upper limit.

The World Trade Center on a clear, sunny day used to report 40-mile visibility. On less pristine days, visibility could be much less including foggy days where they were less than a few feet. On that best of days, you are not likely to see many details at that distance, only the larger objects are discernible. Different people with different eyes will resolve those macro objects in different ways.

The first challenge is in giving your eyes a tool that resolves what you are seeing at any distance you might want to view objects on your flat world.

The second is the elimination of all objects/conditions that would impact the ability to see the maximum distance possible. You indicated in your question, there were no objects to interfere. Atmospheric conditions would be the single obstruction that affected your viewing distance. No matter what distance, you would assume a theoretical clear day that allowed you to eliminate those conditions from the equation. Any object anywhere on the line you are viewing would also, in effect, end your line of sight on that line.

If objects were an issue, the World Trade Center had a fantastic viewing range on clear days, it was partially due to height which overcame some of the Earth's curvature (an "object"). Your flat world viewing distance would be enhanced by a viewing platform that could eliminate any objects from obscuring your long range views. The required height of your platform would depend on the distance those objects were placed on your plane. Basic triangle math would determine how tall that platform would need to be based on how tall the objects on your plane were.

The third challenge is the speed of light... if you have optics that enhance your ability to view at any distance, you have no obstructions, and light from the furthest distances can get to your optics, you theoretically should be able to see an infinite distance.

Each star we can see on a clear night exhibits this view of infinity quite well... while we can't see the details of those stars, we basically can see light-years. With the right optic, theoretically we could see the planets orbiting those stars. Your flat-world under optimum viewing conditions would have similar results.

I took this panorama photo in the Oklahoma panhandle, one of the flattest places on Earth. It is 180 degrees (that's the same highway stretching in both directions). It was shot with an iPhone SE, whose aperture pupil is 1.86mm, smaller than what HDE226868 lists as a bound for the human pupil (therefore the human eye would do better on his limit calculations).

It is 37 km to the horizon. Clear day. Beautiful color. In one sense, you can see a whole lot of nothing -- no cars, buildings, people -- for kilometers. But if you zoom in on this image, you will see details on the horizon that will give you a real feel for what you can resolve.

Below is a low-res thumbnail. The high-res image is here.

HDE226868's reply provides you a theoretical basis for estimation. I figured an experimental basis might be useful as well.

Firstly, Rayleigh scattering, which effectively redirects a small portion of light as it travels through a perfectly clean atmosphere. In a pure nitrogen atmosphere at STP, the light you get out of a regular green laser (wavelength 532nm) will have a Rayleigh scattering cross section $\sigma$ of about 5.1x10-31m2. You might expect to find about 2x1025 nitrogen molecules per cubic metre.

Given an initial beam intensity of $\Phi_0$ that travels through $z$ metres of this nitrogen atmosphere with particle density $n$, the intesity of the beam as it leaves $\Phi$ is defined as $\Phi = \Phi_0e^{-n\sigma z}$

This means that a beam of that passes through 1m of that nitrogen atmosphere, 99.99898% will carry on in the direction it was travelling and the rest will be scattered in a random direction. Once that beam of light has passed through approximately 450km, only 1% of the light will have been unscattered.

This has two important effects. Firstly, things that are a very long way away will appear fainter, as some of the light travelling from them will be scattered away and will never reach your eyes (or whatever you are doing your looking with). The second is that the Rayleigh scattering cross section is inversely proportional to the fourth power of the light's wavelength: shorter wavelength (eg. bluer) light is scattered more strongly than longer wavelength (eg. redder) light. This means that things will be fainter and redder. A similar effect occurs in astronomy, whereby distant objects behind clouds of gas and dust appear redder, even in the absense of any redshift effects, because the bluer parts of their spectrum are scattered away.

Computing the exact effects here is awkward, at least in part because the definitions I've found for computing Rayleigh scattering cross sections totally disagree with actual measurements of cross sections, so whatever I'm doing I'm clearly doing it wrong. Nonetheless, it seems clear that even in extremely clean air lines of sight of over 100km aren't going to show you much. Here's an example from the real world, with a 90 mile view.

When the stuff in the way of the light is large compared to the wavelength of that light, you can't use the Rayleigh approximation any more and you need to think about Mie scattering, which is a bit more challenging. Cloud, fog, mist, smoke, soot, ash, dust... all these things cause Mie scattering. Mie scattering from large particles is mostly wavelength independent (which is why clouds are whiteish or greyish) though shorter wavelength light tends to get scattered more.

Actually working out the contribution of Mie scattering is a) really hard and b) requires making a lot of assumptions about the nature of your atmosphere ("Earthlike" has a vast amount of variation), so I'm simply not going to do it.

Instead, I'll steal a table from chapter 15 of Vision and Acquisition (available in its entirety for free here). 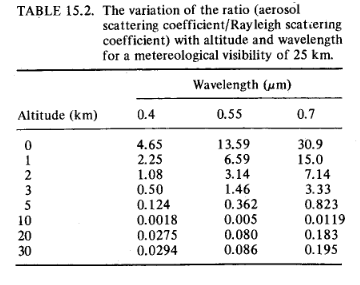 Mie scattering tends to be more biased towards scattering in the direction the light was originally travelling, so it won't make things dark so much as make them blurry and faded... effectively, distant objects just disappear into a featureless "haze". You can see that the effects of this sort of scattering can be profound. Precisely quantifying it is very hard, but it is worth noting that with the best eyes in the world you can't "see through" this haze... the light travelling towards you from a distant object has been bounced around and blurred enough that the details are no longer there to resolve. HDE 226868's answer points out that the resolving power of the human eye is limited but artificial aids can help... this should show that they'll only take you so far, and the best visible-light telescope in the world isn't going to help you. YOu need to use longer-wavelength things, like infrared or radar to help you here.

I'd like to say more on atmospheric distortion (for instance, I think you might see a slight bending effect that makes it look like you're in a very broad, shallow dish instead of on a flat plane) and thermal distortion is also going to ruin seeing things at a distance, but everything is just entirely too hard. Sorry about that!

Not the answer you're looking for? Browse other questions tagged hard-science atmosphere alternate-earth or ask your own question.

32
What Factors Could Cause a World to See “Northern” Lights Much Closer to the Equator?
30
How far away could Earth detect a projectile travelling at relativistic speeds?
16
How far could a planet be from its star and still be kept habitable by intense greenhouse gases?
39
Reasons why air travel isn't feasible, but ground travel is?
3
No More Looking from the Same Side of a Mostly Liquid Surface Terrestrial-based Moon
103
Would planets be cubic in my “cuboverse”?
13
How far from the Sun could we detect an alien spacecraft similar to the Voyagers?
5
How far can a human see?
29
Can a planet have a day that's always longer than night?
9
How can an Earth-like moon meet these angular diameter conditions?