How could an Earth-like planet support all-metal airships?

When I say all-metal airships, I'm referring to something like the above from Jakub Rozalski's artwork - the design is more akin to a naval destroyer or battleship and less like a zeppelin. We've seen metal-clad airships before but they didn't seem to work out too well.

The level of technology is roughly equivalent to the early 20th century, with fantasy elements thrown in.

I'm admittedly not too knowledgeable about what would need to be changed regarding this Earth-like planet's composition, but I'd like for it to still be capable of harboring intelligent humanoid life either way. I'm assuming the gravity would need to be reduced or the atmosphere would need to be thicker with lifting gases - the pictures show engine propulsion but I thought there could be a case for a large enough amount of gas cells protected within the interior.

I love the concept, but don't see anything that big and made with armor that heavy (iron/steel hull as per your references to tanks and warships) being able to be held afloat with technology of the early 20th century, even in a much denser atmosphere.

Using the HMS Dreadnought as my example of the early 1900s battleship, as it revolutionised battleship design, including being the first to use steam turbines (coming straight from Wikipedia with this), we're looking at an 18000 tonne craft.

For reference, the heaviest aircraft to date is the Antonov An-225 Mriya, which clocks in at an impressive, but comparatively miniscule 640 tonnes. It's approximately half the length, but we're talking many magnitudes lighter, while still needing to hit approximately 300km/h to even get off the ground. So we're a long way from the awesome concept of floating iron dreadnoughts looming ominously over a battlefield without magic or handwavium.

A related question attempted to achieve steampunk sailing ship-sized gondolas on airships in our current atmosphere and the answers did a good job of explaining the issues of weight and steam engine power output for those much smaller and lighter ship designs. See here: Realistic Airships

I don't see a world with a breathable gas atmosphere that could support such weight, unless you want to get into the realms of breathable liquid atmosphere, in which case this is an interesting read: Liquid Breathing

You have to have air as heavy as water.

If these things have an average density similar to the sea faring battle ships they look like, they could only float if the air were about as dense as water.

So, Earth like gravity, exotic atmosphere. How do we make that happen?

The gas with the highest density (that we know of) is tungsten hexafluoride. It's colorless, which is good for your epic vistas, but toxic, which is bad for whatever lives there. It's also only 13 kg/m3. That's a lot better than the 1.2 kg/m2 of air on earth, but no where near the 998 kg/m3 of water.

So, modern material science lets you down, but don't let that stop you! Let's assume you can find an amazing, inert (or at least non-toxic) gas that's a as heavy as tungsten hexafluoride and fill your atmosphere with it. You still have to have very light ships. I'll leave it to you to figure out what a 13 kg/m3 ship is like. Mostly balloons on the inside, I guess.

Atmospheric pressure is a function of depth and density. That means that with a heavier gas, your pressure is going to be a lot more, or your atmosphere isn't going to extend so high above sea level.

With high density air, even slow winds carry a lot of energy. Light winds could blow decently sized rocks around. Wind storms common on earth would be terrifying, city destroying disasters. Sky scrapers, which on Earth are limited mostly by wind, might be impossible on such a planet.

Floating objects feel almost no wind. Without propulsion, they move with the wind so perfectly that passengers will not perceive any wind at all. Not breezes or turbulence or anything. Hot air balloonists comment on the eerie stillness all the time. An airship under power is a different story. The wind of their motion could of course be quite substantial.

Oxygen breathing life on earth can survive in a large variety of atmospheres as long as there are no toxic gasses, and there is enough oxygen. It's not a matter of percent, it's a matter of how many oxygen molecules in each breath. You don't need 20% oxygen, you need a partial pressure of about 160 mmHg. In the past, NASA ran space ships with 100% oxygen at 1/3 atmospheric pressure. Or 50/50 oxygen/helium with about 2/3 pressure. You could have 4 atmospheres of pressure, and only have 5% oxygen and Earth life could maybe live there. Or adapt to live there, at least.

The nice thing about cranking up the pressure, is you get extra density. In 4x pressure, you get 4x density. That means your ships can be 52 kg/m3 instead of 13. That's like 10x lighter than real warships, but feels much more doable.

I think in order to solve this problem without changing the technology you will have to introduce some substance we don't have in our own universe (that we know of yet). I am unable to come up with any reasonable explanation that is entirely scientific, however if you introduce some new materials to make the ships lighter, assist with an anti-gravity effect, etc, that would definitely work without tipping the technology level too far.

Go back to the future

Another option would be to have "ancient" tech. A scenario where previously there was higher technology on this planet but at some point there was a dark age equivalent and technology regressed, even wiping out details on how the old but more advanced tech was created. Introducing higher technology options, but in short supply and with very little knowledge of their operation, is an intriguing element all on its own and allow you to stay true to keeping the current technology at 20th century level. The tech to create floating battleships being in short supply would ultimately mean that these battleships would be fighting over the very tech to create them. Each battleship created would be a symbol of iron irony.

The US Navy had an intense interest in lighter than air vessels right up until the 1950's (giant blimps used as airborne radar platforms), and commissioned an all metal blimp in 1929, the ZMC-2 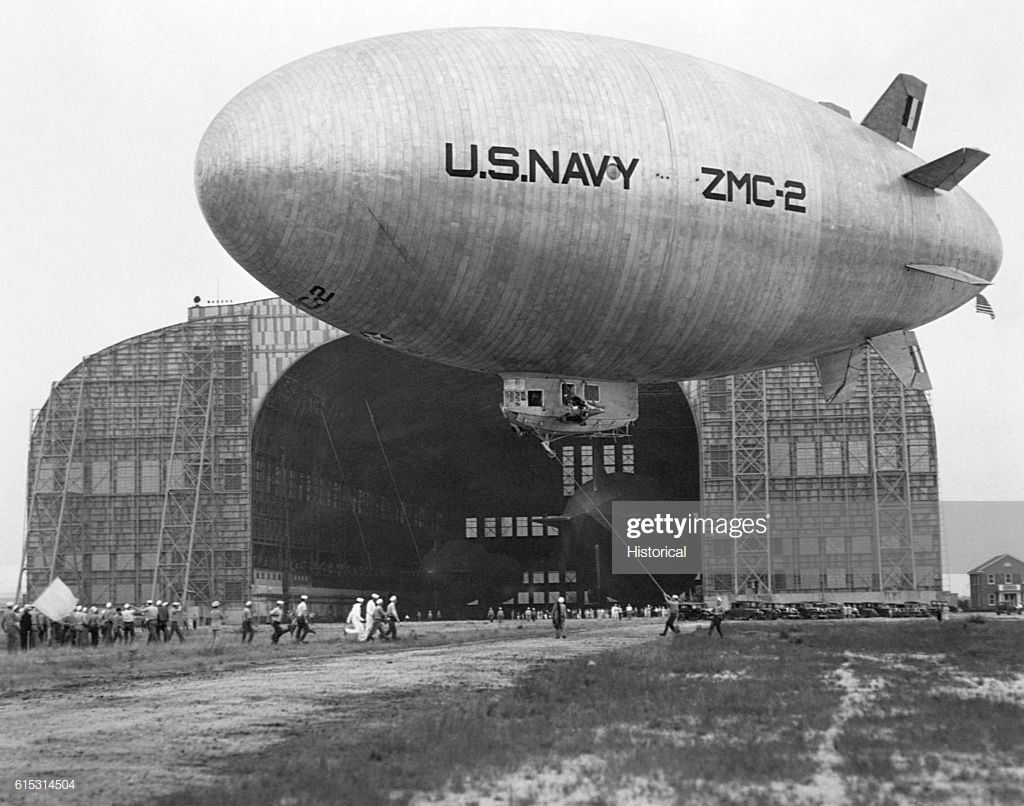 ZMC-2 in front of a hanger

However, like all LTA craft, it works by displacement and it's relatively small size suggests that a larger envelope would rapidly reach a mass which could not be lifted by the helium gas.

Another method that might "work" is to eliminate the use of displacement for lift and follow the direction of visionaries in the mid 1800's who saw flight as being done through the use of powered airscrews, much like a modern helicopter: 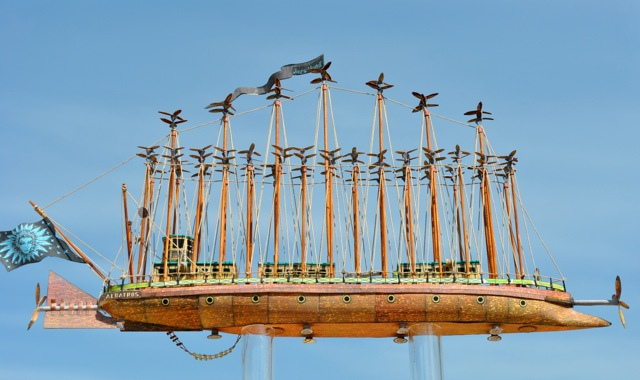 The problem here is the size and weight of the power plant and associated transmission to turn all these airscrews. With early 20th century technology, this would essentially fill the entire airship. While devices like pulse jets and even gas turbines had been described and crude forms built in 1906 and 1903 respectively, materials science and other supporting technologies really were not available until the 1930's, so a compact gas turbine powered "Albatross" or using pulse jets to turn the rotors would be at the very extreme edge of possibility (unless you are going to make some other changes to the timeline).

Of course as a military vehicle, it also becomes extremely vulnerable to fouling or damage to the rotors, so air battles become analogues of "Age of Sail" battles with airships firing "chainshot", nets or something similar to damage the enemy ship's rotors.

While we are not going to have airships like battleships or armoured cruisers, it is somewhat possible to actually have metal airships. They just are not going to work that well in reality.

Someone once asked Randall Munroe whether a submarine could float within Jupiter's atmosphere.

His response includes the passage below. TL;DR: buoyancy depends only on density, but by that time any atmosphere is dense enough to support a ship it also has a pressure high enough to crush it.

Buoyancy depends on density, not pressure. There's a point in Jupiter's atmosphere where the pressure is equal to a little more than an Earth atmosphere—which is the pressure a submarine is used to—but the air there is barely a tenth as dense as ours. A submarine in that layer would fall even faster than it would in the air on Earth.

To reach a depth where it could "float" in Jupiter, the submarine would have to go halfway to the center of the planet, where the intense pressure turns the air into a metallic soup that's hotter than the surface of the Sun. The pressure there would be so high that not only would the submarine be crushed, the substances that make it up would probably be converted into new and exciting forms. It's hard to create those kinds of conditions in a lab, so we don't know a lot about how materials behave with that much pressure pushing down on them.

In the sea, on the other hand, the density of the fluid stays relatively constant. That means the submarine can find its appropriate pressure range and float there. In other words, submarines only work because water doesn't follow the ideal gas law.

To make the drawings realistic not only the ships, but the people in them as well would have to be made of something stronger than any material mankind has ever produced.

Balloons cause the weight of the "ship" to be lighter than the air they fly through. Similarly, ships on water float because they displace more water weight than the ship weighs.

The Martian ships aka Space:1889 used a Martian forest wood known as liftwood. This was attached in a louver fashion in arrays along the bottom side of the ships. When angled ground-wards, it forced the ships up into the air. Destroying these panels would destroy the lift of a ship and send it to the ground.

To get flying metal ships requires some level of tech or natural material that creates the lift when incorporated in the ships. For giant metal ships with the ability to engage in combat with large bore counter-fire, would imply a powerful natural agent that engages some level of lift against the planet surface that is engaged at a variety of intensity levels to raise and lower the ship from the ground to its operational altitude.

Using a lift mechanism that is rotated in a similar fashion as the design of liftwood, and imbedding that inside the armor of the ship would protect the flying integrity of the vessel. Giving it a coal powered, generator, faraday cage structure that spun on intensity axles would be my creative solution to these ships.

Not the answer you're looking for? Browse other questions tagged planets gravity atmosphere airships or ask your own question.