How could people travel from England to France with 17th century technology without using a boat?

This is a continuation of my last question about how long it would take the tunnel between the two countries to fall apart. So let's say that there's a group of people who have no more than 17th century technology; how would they get from England to France? I was originally planning for them to take the tunnel, but apparently it would fall into disrepair rather quickly. Another factor to this is that there are government forces patrolling the borders of France, so if they could be unseen that would also be helpful.

Edit: This is in the future, not the 17th century. And the reason I'm assuming they don't know about the people living in Paris (the only city left) is because water levels have risen and there are people preventing them from crossing over.

Background: I've put this in other questions, but I'll include it here as well. At some point there was a plague, and the basic backstory is that a bunch of rich people and inventors came together and created a very prosperous community in Paris. The city is heavily protected, everyone is rich, and they get their resources through mechanical means, so there is no impoverished class. Over time, people were taught that the outsiders (people who had survived) were barbarians. In reality, the city's military, which is separate from the rest of the people, prevents the outsiders from improving their technology or getting to close to the city. My characters live in England, and are some of the people who are restricted from modern technology, and for reasons not included here they find out about Paris. They are understandably curious, and try to get there. My question is how?

Edit #2: There is no nuclear waste or anything environmentally dangerous, just an army with superior weaponry preventing them from going to Paris.

If I forgot anything just ask

As it turns out, flooding does not matter. As you can see from the elevation map below, most of the land between the strait and Paris is higher than Paris itself. For Paris to still exist you need less than a 70 meter rise in sea level, but most of the land in between is 120-180 m above sea level. Even if you raise sea level by the maximum you can without destroying Paris, the narrowest part of the strait will barely change its distance, making passage, even by stone age quality boats quite easy. If anything the rise in sea level makes things easier because the flooding could cause a bay to form. This means any casual explorer plotting the coast line could find Paris quite easily.

As a side note, 60-70 m is about how much the oceans would rise if 100% of the world's ice caps were to melt meaning anything that is not in purple or blue on the attached map can not be covered by water even in a worst case scenario. This means even if you melt everything there is to melt and move "New Paris" to higher ground, you still can not meaningfully affect the distance between France and England. 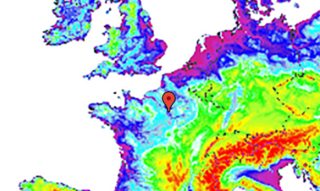 This makes the biggest obstacle Paris's modernized military. As it also turns out wooden boats are really hard to pick up on radar. Civilian wooden boats often need to be equipped with special radar reflectors just to make sure other vessels can see them. For your Paris fleet, this means they will need to rely on visual confirmation to detect small wooden crafts coming in, and if the barbarians choose to use primitive row boats instead of sail, then even visual confirmation will be pretty range limited. In all likelihood, getting close to Paris will be easy. The only challenge will be how to get into it once they are there since the city itself is probably very well guarded and entrances are limited.

At this point it comes down mostly to your own narrative, but with resources acquisition being automated, my guess would be to hop on the back of a robotic freight vehicle and ride it in with the regular traffic.

There is always the way they used to:

By Boat. Sail boat, Row Boat, viking longboat, doesn't really matter. The travelers are going to be the Same as smugglers from ages past.

France has a pretty long coastline, so all you really need to do is find a small out of the way cove and drop anchor then take a small rowboat the rest of the way in. The whole coastline cannot be adequately covered, and if you are talking 17th century tech level, communications from the coast back to the nearest population center are going to be necessarily slow. So find a sheltered spot. You might even have a situation where the main boat can only get in so far, and it takes a very small boat to get the rest of the way safely.

Depending on the state of the local guard, a small force of quiet, armed men could overwhelm a small garrison and silence any alarms allowing them to be undetected.

This is an age old technique, used by smugglers, pirates, and other ne'er do wells since the time of the very first import tax.

There once was a guy named Ragnar from Denmark. He and a couple of his best pals built a sailboat without the use of any powered tools and without using any materials they didn't process themselves from natural resources. They then took them on a trip all the way from Denmark along the coast of Germany, the Netherlands and France, up the river Seine and right into Paris. They then collected a large heap of souveniers and sailed all the way back home to Denmark.

They only need a king on board. Why?

One of the most interesting bits of British Isles mythology is that rulers (originally kings, but it got extended (no surprise) in the Elizabethan era) are rulers because of divine right. God put them on the throne, and God would not allow them to simply drown. William Rufus, son of William the Conquerer, took advantage of this "fact" in 1099 a.d. With a massive storm raging in the English Channel, he demanded that a ship sail out into the storm to carry him to Normandy so he could suppress an uprising there. The captain refused but was convinced after Rufus pointed out that kings never drown. The crew could not refute the point, so they sailed. And the storm immediately died in the channel (likely the eye of the storm passing over). They reached the far side, disembarked, and the storm picked back up.

So if you need old-school tech to cross the channel, just get yourself a ruler (king or queen) and tie him or her to the mast head!

The short answer: it's not possible that no one in England would not know anyone is in France because of things in your very premise and in history.

2) Even barring number 1, if Paris is much more advanced, though restricted, there are always explorers, there are always people who will break the rules or who are curious enough to go forth. And going forth, in this case, is super easy. I mean you can SEE France from England and vice versa. It's only 20 miles or 18 nautical miles. That's important. You can make it in a rowboat for gosh sakes. Pretty much anything that can float and carry people. We've had that tech, long, long before the 1600s.

3) The people in England though--they don't have restrictions.

You have in your premise that the military prevents egress. But Paris is about 180 miles from the nearest point of France to England. And beyond that, the coastline of France is over 2000 miles long. So your military would have to police all of that coast 24 hours a day, 7 days a week. Without being seen, so people in England wouldn't know that people in France exist. Smuggling at least, of which there is a long tradition, is going to happen, and it's unrealistic to say otherwise. You'd need some control and cooperation on the English side, and even then---history tells us it will be happening.

Let's look at it obviously: We have a big water to cross. So we need a floating object, which usually is a boat. Boats are with humanity since the stoneage, starting with unihulls and canooes for fishing and then going to bigger rafts, outrigger-canoes and ships for netfishing, then pure transport vessels were developed. So we can say, that for some reason or another, a somewhat seaworthy vessel will be there.

Realistically, that is all that is needed to cross the channel, but let's just for the exercise assume that the channel is not a possible crossing point because... the Paris commune plastered the whole coast of France with nuclear waste from Le Havre and getting on land anywhere along the channel is a death sentence as you get irradiated to walking Ghost stage by simply being there. Or some other reason.

Now, let's assume that the English have heard of Paris, but they also know that the channel is no way to go because of... reasons. They might have heard rumors of the "Ghostmaker-lands" or something. But they also should know from remains from the pre-fall civilisation, that Britain is an island that lies west of an inland sea, that has a rather steady western wind. With a simple sail, just getting a boat into the water and following the wind from the west will bring our adventurers from southern England towards Belgium, Holland, the Friesland coast of Germany or Denmark. From there, it might be a long trek along the coast to the mythical Paris commune, but they also would most likely get more information as they go.

Simple: Boat from Dover-to-Calais (it's like, (edit:) twenty miles)

Extreme: In the future, there's an ice-age sucking up a lot of the earth's oceanic mass; there's now a land-bridge like during the last ice-age (doggerland) 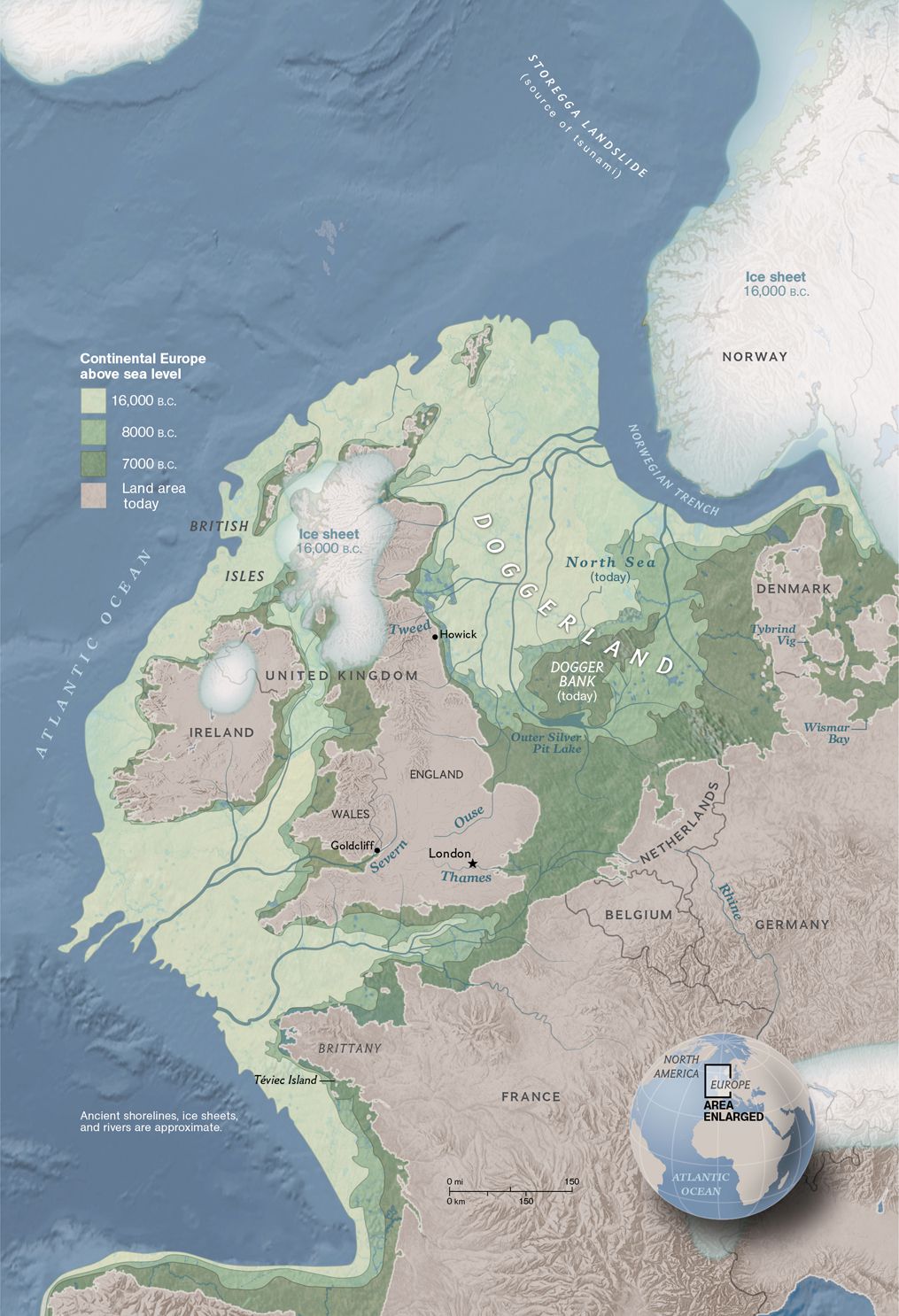 Not the answer you're looking for? Browse other questions tagged civilization travel or ask your own question.

5
How would a cave civilisation survive underground?
22
Is it possible for a large pre-electricity empire to stay in touch?
5
Being aware of highly evolved civilization
12
Travel in Empire Pangea
3
Speed of civilization change
3
Assuming that the environment of Earth and Mars are similar, is there possible trading between Earth and Mars in current technology?