I want to make an alien species evolve without fear, or atleast not fear as we know it. Intelligent life, as I understand it, requires fear to encourage an organism to keep itself alive.

What emotion or sensation could replace it?

What evolutionary path would lead to such a development?

The purpose of fear is a prescriptive measure in humans to have them avoid getting into bad scenarios which have short term gain. Should primal man venture into the night? Fear says no, because you'll get eaten by wolves. Should modern man rob a bank? Fear says no, because you'll get caught and have to go to prison. In both of these situation, a cost-benefit analysis would suggest the same thing fear does, so why is fear necessary? The answer is because humans value short-term gain over long-term gain. Thus, in order to balance the scales back towards long-term gain, something is needed - a fear factor to help stop humans from wanting short-term when the long term is negative.

However, if you made the alien species such that they de facto tend towards the long-term and rarely concern themselves which short term, then they wouldn't need fear, because they'd always look towards long term benefit. On the flip side, they'd actually have a problem with spontaneity - in other words, it's unlikely that they'd be able to make snap decisions because of this focus, so they'd need a kind of emotion that humans don't have - a hasty emotion which focuses on the present.

Whenever one of these base emotion questions come up, I like to bring up Lövheim's Cube of Emotion 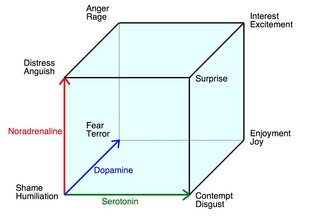 Now I have to put a disclaimer here, before I go any further. The connection between monoamine neurotransmitters and the eight "basic" emotions that Lövheim proposed deserves some skepticism. He proposed it in 2012, and very little follow up has been done. In addition, I assign meanings for the transmitters which are decidedly oversimplified. However, for writing and worldbuilding purposes, I find this overreach proves very effective in exploring emotion, so I continue to use it despite its questionable pedigree.

In Lövheim's cube of emotion, the 8 basic emotions of affect theory are paired to combinations of the three monoamine neurotransmitters: noradrenaline, dopamine, and seratonin. For example, fear/terror is associated with high dopamine, low noradrenaline and low seratonin while joy is associated with high dopamine and seratonin but low noradrenaline. This connection between emotion and neurotransmitter levels, were it to be found to be true, would be a very powerful statement about how our brain works.

For worldbuilding, I take it one step further. I looked at how these neurotransmitters operate and tried to over-distill it into something for worldbuilders.

These oversimplifications lead to surprising insight into how these emotions flow. Fear/Terror is associated with high dopamine, but low noradrenaline and seratonin. Through my oversimplification, we can say that fear is what we use in a situation where our body is very unhappy with what's going on (low seratonin), and we see that the situation is unfolding in that bad way predictably (low noradrenaline), but we see a way to make the situation better (high dopamine), perhaps by running in a useful direction.

Contrast that with distress/anguish, with its high noradrenaline and low dopamine and seratonin. In that case the brain doesn't see a way for things to get better (low dopamine), and there's constant hard to predict stimulus (high noradrenaline), which is the thing causing the distress. If it ceases to be unpredictable (noradrenaline goes down), we fall into shame/humiliation. And if you think about what happens as a person simply gives up the fight, this seems awfully accurate for how many simplifications we took getting here.

So what are some of our options?

No matter what, you're looking for an environment where the stereotypical responses to this scenario don't apply. I find that opens the door for a lot of brainstorming, so have fun with it!

At the species level, a high reproductive rate can make up for a lack of fear. Beyond that, if the species is significantly more dangerous than the other predators in its natural domain, the absence of fear would be advantageous to their survival since they would benefit from the greater reward which is usually associated with greater risk. So don't replace fear with another emotion. Just make them extremely fertile and dangerous.

What happens if you remove fear from an ordinary person?

We can point to one famous example that has been studied in real life: The case of S.M., a woman who due to a rare genetic condition has been left without the ability to feel fear. When confronted with situations that would ordinarily cause someone to become cautious, she would instead become curious and inquisitive.

For example, when confronted with dangerous snakes, she would become fascinated, asking many questions and repeatedly asking to touch even some of the more dangerous specimens - and this is in spite of having previously stated a dislike for snakes. Similarly, she would happily take the lead in haunted houses and indeed reported excitement and enthusiasm

Though a lack of fear led to her getting herself into many dangerous situations - she had been held at knife and gun point a lot, to give one example - she continued to have a generally positive outlook and seemed immune to PTSD

If your aliens are comparable to humans, we can imagine they would experience similar emotions when faced with potential danger.

Building from this, we can also point to factors that might guide a species to evolving an underdeveloped sense of fear as a whole, instead of as a rare anomaly in one or two individuals:

These are just a few examples of factors that might lead to a species losing its ability to feel fear - in general I would suggest an environment that strongly rewards curiosity and lacks many ways to kill the proverbial cat would be most likely to enable your fearless aliens.

Not the answer you're looking for? Browse other questions tagged evolution survival psychology or ask your own question.

13
What could make an AGI (Artificial General Intelligence) evolve towards collectivism or individualism? Which would be more likely and why?
100
Would intelligent life evolve any other body plan than humanoid?
9
Does intelligence necessarily lead to an abstract language?
7
Why would a parasite evolve sapience?
7
Could a plant-like forest or jungle form in an underground lava dependent ecosystem?
4
Building a non-human cyborg out of amoebas
16
Would there be any major disadvantages for a species to have six legs instead of four?
4
What kind of environment would a proto-human have to be in to evolve into the following type of species?
36
What sort of world would help prevent an intelligent species from discovering evolution?
6
How feasible would non-jawed vertebrates be on land?