Swords as a standardized sidearm and tool

The swords in question are basically machetes, being built for toughness and as a slashing weapon. The army that is using these swords is a professional force of pikemen and crossbowmen, but is relatively small.

Note: Yes I know that pikes and crossbows are more early modern than medieval, but there’s not a tag for it and it makes sense in story because this army is part of a smaller but more advanced nation

Things to look at

It's worth noting that the standard offensive weapon of the Roman legions was the Gladius: a sword right around your 45cm mark. That is a self-evidently effective weapon against light armor infantry with a variety of weapons. Swords became larger and heavier (and slower) as a response to stronger armor; pikes were primarily anti-cavalry weapons, and are not something to fight a swordsman with (a pike is too clumsy in close quarters). Axes — while in some ways superior to swords — are better suited to disorganized skirmishes than regimented combat, because they need a wide arc to swing.

Roman soldiers also carried a dagger, and they would have used that for any camp needs. No soldier is likely to use his primary weapon for mundane tasks, because every time a blade is used it dulls a bit and receives stresses that can (in the long run) weaken the metal, which can mean the difference between life and death. Any organized group would have a wagon or pack-animal loaded with wood-axes and such.

Equip your crossbowmen with archer's mauls. 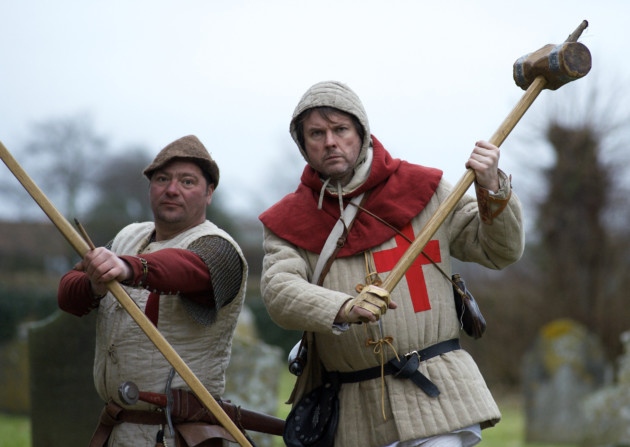 Apparently the sidearm of choice for English archer was a 5 foot leaden maul.

And herein our archers of Englande far paffe the Parthians, which for fuche a purpofe, when they fhall come to hande ftrokes, hath ever redy, either at his backe hangyng, or els in his next felowes hande a leaden maule, or fuche lyke weapon, to beate downe his enemyes withal..

I think that these mauls were useful for driving in stakes, which were set up as a defense against cavalry charges. That should go for crossbowmen too at least; pikes are their own anticavalry weapon. I thought the archers cut the stakes on site but no - they were made in advance, like the arrows but then had to be deployed.

I guess people were using mauls for war in those days. This site is great https://willscommonplacebook.blogspot.com/2010/01/archers-mauls.html and describes French rioters as breaking into an armory wherein were stored 3000 battle mauls. The rioters proceeded to beate downe rich folks, but in French.

I am picturing me and my pike and crossbow buddies without our regular stuff, but with shortswords. We are facing a bunch of dudes built much like us, but with 5 foot long lead sledgehammers. I am not sure which side has the advantage but we are going to try to get in close as quick as we can.

Historically, the swords were actually handled by professional swordsmen who were part of the combined arms "Pike" team. The pikes provided the solid hedge against cavalry and the ability to "push" against opposing forces, crossbows provided ranged firepower without needing highly trained archers like English and Welsh longbowmen (who trained since childhood to become deadly archers) and the swordsmen protected the pike squares from enemy swordsmen trying to come in under the pike hedge to attack the pikemen, or alternatively to attempt to infiltrate the enemy pike hedge. Swordsmen also served too protect the flanks of the formation.

While pikemen often carried sidearms as well, given the size and bulk of the pike, it seems that the pikemen would be far more likely to carry daggers or utility knives, and were not expected to drop pikes and fight with swords (indeed that would be counterproductive to the use of pike squares). The sword being described seems to be the right size for protecting the pike squares, although perhaps the swordsmen might prefer something with the ability to stab as well. These swords are not, however, large or heavy enough to beat down a pike hedge; that would be the job of the huge two handed swords (Zweihänder), or bill-men using bladed polearms.

So while it is unlikely that the pikemen themselves are likely to carry these sorts of swords in great numbers, there should be a corps of swordsmen as part of the formation to protect the pike squares.

Crossbows and pikes make sense as weapons because they allow the bearer to hit the target from a distance.

A short sword doesn't make sense in this use case, because if the target is close past the range of the main weapon it means your lines are broken.

Moreover, for both crossbow and pike the bearer needs to use both hands to use them, so there is no way for him to handle the short sword, which would then be just a ballast. Again, not useful.

Not the answer you're looking for? Browse other questions tagged reality-check medieval military or ask your own question.

19
Combat in age of swords and railguns
1
Nanocellulose swords/ melee weapons
25
Shattering Swords: Yea or Nay?
35
Weaponry made from extreme light-weight steel: swords and daggers
38
Are “Midas” swords useless for warfare?
12
Standardized building materials across a Roman style empire
3
How would an elite force(special forces and SWAT) work in a medieval setting?