Would tidal acceleration mean doom for this system? 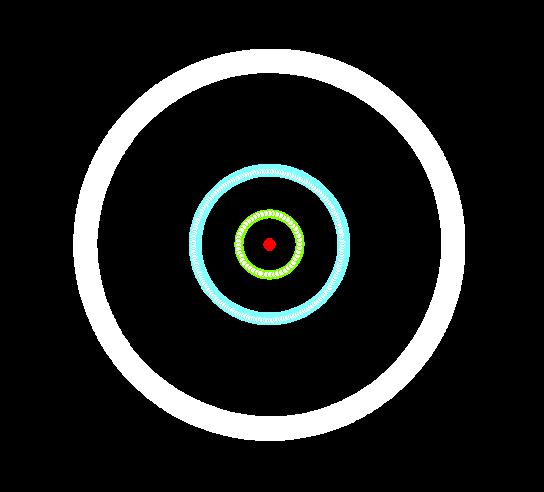 Our moon is receding from the Earth by 3cm or so every year. If the first moon is receding at that rate, it will take 1 billion years to reduce its separation with the second moon by half and probably disrupt the system (the moons start at 2.5x semi-major axis separation, and experimentally 2 times is just about okay, but beyond that it starts to get dicey). However, I imagine that when the moon was closer it experienced a lot greater force from the tidal effect, so I wonder if this is realistically going to happen much much sooner than that.

Is it possible to have a lower magnitude tidal recession so the system can last 5 billion years?

Tidal recession is produced by the tidal bulge in the primary due to the mass of the moon(s). Our moon is huge by comparison to the Earth, so even though it's also incredibly far out compared to other large moons (and the sizes and masses of their primaries), it produces a good sized tidal bulge in the Earth, which (because the Earth isn't tide-locked to the Moon) drags the Moon "forward" in its orbit and thus pushes it out. This has seemingly been going on for billions of years.

Now, there are at least a couple possible outs for your super-massive three-moon system. First, the moons are much smaller relative to the primary than ours, so none of them will produce a huge tidal bulge -- which will reduce the rate of tidal recession (the high mass of the primary helps here, too). Second, the same effect that pushes out the innermost moon will push out the others as well, so they'll all move outward. The inner ones will tend to move out faster, I think (I'm not an astrophysicist, however), but the fact that they're all moving the same direction should buy you some (geological) time.

Another possible "out" is to have the primary rotate more slowly. If it's close to the same period as the inner moon, that moon won't be pushed out significantly (or at all), but the outer ones will will (though more slowly than they would have with a faster primary rotation).

Tidal Recession is only one of a number of factors in play here, and as Zeiss Ikon pointed out, it's going to be considerably LESS of a factor in your system than it is in ours because your moons are smaller relative to the primary.

If you REALLY want stability though, you want to have a look at orbital resonance. If you set your moons up such that they have (for example) a 1:2:4 relationship between their orbital periods just like the Gallilean moons of Jupiter do, then the gravitational effects between the three of them will keep them all stable.

I'd say that Tidal Recession is one of the LEAST of the effects moving the moons around. Mars sized is a very big moon, even for a super Earth. It would be big for a gas giant. None of our planets have moons anywhere close to that size. With only 1 mars-moon, the super earth would essentially be in a binary system. Adding more moons would likely be unstable. The moons would eventually collide, or expel each other until only one moon remains. Orbital interactions between different moons would be much, much bigger than tidal effects.

The only chance of keeping all the moons in nice, stable orbits is for them to be in some sort of self-reinforcing resonance. Jupiter's 4 major moons all have such resonances with each other, but they're much smaller compared to their host planet than your mars-moons. Such a system may not be possible with the sizes you describe.

If you have a resonance to keep the moons in their orbits, then the reinforcing effect of that resonance will counteract tidal recession, so you won't really have to worry about it. It would still happen, but very very slowly, and all moons would be pushed out together in a way that preserves their resonance.

I haven't done the math for you, but here's some resources I would suggest.

Guide to moons around terrestrial planets

Guide to moons around gas giants

Also, this site loves to suggest Kerbal Space Program, but in this case, you should check out Universe Sandbox. It's the best n-body orbital simulator that you're going to have access to. Set up your scenario and run it for a few billion years. It'll give you a more reliable answer than you'd ever get from this site.

Not the answer you're looking for? Browse other questions tagged space moons orbital-mechanics tides .

10
How would this tidally locked planet be affected by its moon and would the moon have a deaccelerated orbit?
2
Would the following hypothetical planets in the 61 Cygni binary star system have stable orbits?
3
Feasible star + planet + moon combo? Did I miss anything that makes this system wildly unstable or otherwise impossible?
7
Determining this horseshoe/co-orbital moon's possible orbital periods
8
Which moon is most favourable as a refuelling station?
0
Stabilizing Synchronized Orbit
6
What star can give an earth-like planet a 1-day year?
2
The major effects on the habitability of exomoons orbiting this Brown Dwarf
4
Could co-orbital planets also be double planets?
3
How plausible is this planetary system with binary stars?