Would Game Driving be a viable strategy for dragons? 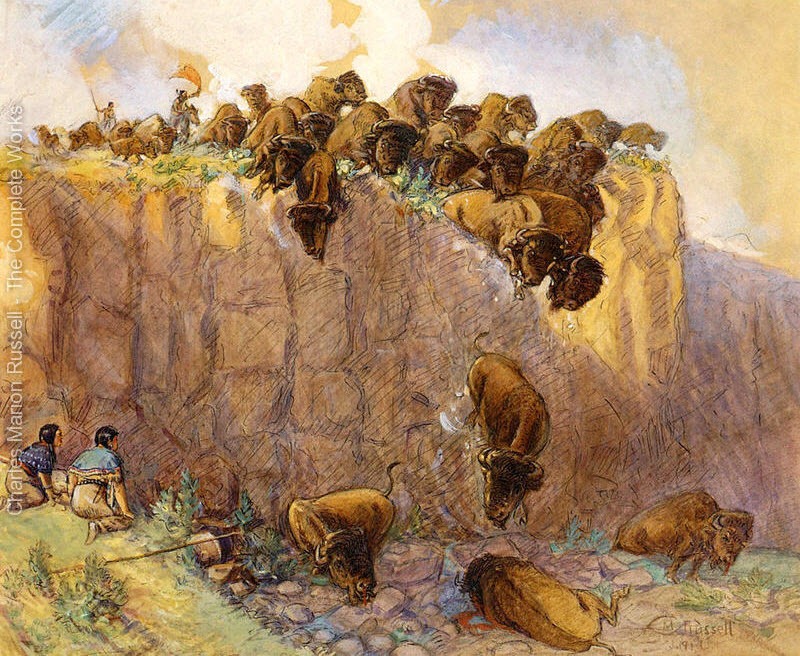 The Game Drive system, perhaps best exemplified by the â€śBuffalo Jumpâ€ť of the North American Plains Indians is a hunting strategy in which large animals are chased into a preselected kill zone, such as being chased off a cliff.

Animals were scared with fire, loud noise, and the simple presence of a dangerous predator (humans).

Hundreds of animals could be killed this way with relatively little effort, which allowed hunters to feast for weeks at a time. There were jumps so deep that it was said that buffalo meat could be preserved for weeks at a time in the pile (still wouldnâ€™t trust it).

So that brings me to the dragon. Dragons by virtue of being a large flying predator would require very considerable amounts of meat to survive. Flight is calorically expensive, as is fighting. The dragons in my setting are more realistic, having only four limbs and weighing less than 100 kilograms.

So my idea is

â€˘Dragons use fire to cut off escape routes

â€˘Because dragons fly they are immediately visible to their prey and can easily keep pace, ensuring that the hunt goes on.

â€˘ Dragons donâ€™t engage in direct combat or just incinerate their prey in the interest of energy saving.

So does the idea of a game drive system make sense for a dragon? Could it possibly explain the purpose of fire breathing and an intimidating appearance?

This would be a pack hunting technique rather than for solo hunting. If you're happy to have your dragons hunt in packs then it's entirely valid. For a solo hunter it may be almost impossible to maintain more than a very short drive. Setting the fires too early may close off the path to the cliff, setting the fires too late would allow the buffalo to escape. And all of that depends on there being fuel on the ground to burn, which would need time to recover between drives. A pack would be able to maintain a path without need to set fires perfectly.

A lone dragon wouldn't need that much meat anyway, smaller prey would suffice.

I do not believe that dragons would normally resort to the need for game driving. Keep in mind why humans needed to resort to game driving to get their food, we were slower than most animals so we had to resort to traps and teamwork to kill them to get food quickly (before we made weapons that allowed us to do so at range). On the other hand, traditionally dragons are much faster, stronger, can fly and have a deadly weapon that they can use at range. Given the weight of your dragons they are more akin to winged wolves (in size) that can breath fire than the traditional gargantuans they are portrayed as, so I would assume that they would a bit faster and hunt smaller prey.

It would be far simpler for a dragon to fly over a herd and roast a few of them for food. (It is a far better use of their fire-breath than using it multiple times in an attempt to direct a panicking herd) They could even just divebomb the herd to pick up a few animals like most birds of prey do in the event they cant/wont use their flames. Weighing in at under 100 kgs a simple cow would last your dragon a while. For example - a male lion eats about 3.5 kgs of food per day and it normally weights about 190kgs. Your dragons gonna need far less than 3.5kgs of meat a day unless its a highly inefficient hunter, an average cow has about 300kgs of meat on it, so if your dragon hunts alone and takes down a cow it has enough meat to last it a week.

Not the answer you're looking for? Browse other questions tagged reality-check biology dragons .

11
Would dragons using domesticated goat-like animals as a source of food be viable?
8
The right size for dragons
12
What anti-aircraft magic adaptation would be better for dragons than flame spitting?
1
Evolutionary advantage for recurve fang in dragons
3
Facial expressions for dragons?
4
Increased flexibility for dragons?
7
How do my dragons hunt?
9
How to sustain this sedentary hunter-gatherer society?
4
Would less gravity allow for larger flying creatures (like dragons)