What modification would make literal fire trees be able to grow?

To help imagine it and my inspiration, it's basically similar to pictures from Abrahamic religions with burning trees like this one. They can't speak though, they are just trees or plants that are burning. 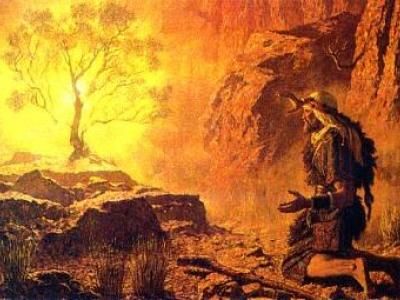 Also, I know about (real plant) eucalyptus trees, which can generate easily burnable toxic oil to create forest fires in order to eradicate competitors. I also know they have thicker or secondary/multiple layers bark/wood and hidden stems in their cores to survive the forest fires they create. They can even shed their bark to be carried by wind in order to create new fires spot. Also, banksia, which need fire to reproduce. So, my fire tree is a bit similar to both of that except it's literally on fire forever until its death. It generates the fire like its leaves. It's not necessary for the trunk/wood or other parts to be on fire, though.

I also think my fire trees burn themselves as an extreme way to create rain, similar to how rain forests do to cool down and get water from the heat they generate (they are not on fire though just hot, I don't quite understand how it work so correct me if I am wrong regarding this). but I also don't want the fire to go away until the tree is dead. Also, the sudden extremely different temperature due to rain may can harm it, even if it can withstand fire. so i am not so sure about this method can work for my tree.

I might use this fire tree for burning its competitors, scaring away anything that wants to eat/destroy it, or spreading its seed. But I can't figure out how they gain energy, is there a way for such tree to gain energy from the fire? What kind of modification/evolution would trees need to do so? Since photosynthesis doesn't seem to be the way to go (correct me if I am wrong, and it not necessarily they get the food or energy from the fire either).

Feel free to correct my grammar and change my tags to the appropriate ones.

Not really an option the way you want it, where it is always on fire. Fire takes a LOT of energy that the tree needs to build up over time.

Let's build a situation where it might make sense to exist with limited time:

On the continent of Worse Than Australia, funghi and various insects are a huge threat for plant life. They infest trees and kill them over the course of a few, short years.

But one kind of tree, the Fire Tree, built a protection against those parasites. At first, it evolved a poison in the leaves to kill the funghi and insects befalling it.

This had two effects:

So the Fire Trees themselves adapted, building a cork-like bark, similarly resistant to fire.

And over time their fruits evolved to release other chemicals in their rotting process that would react with the flammable poisons in the leaves.

So every year around autumn, the Fire Tree would at some point drop its fruits, after a while they would start to rot and start the chemical reaction setting the partially fallen leaves on fire. Keeping most of the tree intact, but killing all parasites once a year.

This is semi-science based and more in the spirit of "speaking burning thing".

You need a tree that have leaves which are producing a lot of oxygen when they mature. Which is near the same time the seeds are ready to ripe.

Now the trees are seeding themself on altitudes where oxygen is scarce due to gravity. But the threes are located in pockets where that oxygen is held. Like a canyon going down that have a dead end. That also gather any soil that is blown with wind and birds that try to fly out suffocate and drop dead at the bottom.

So you have oxygen rich envritoment. A fuel in the form of seeds husks. Now you need the temperature to start the fire. This is where the compost from animals come in play. It generate a nice warm mulch, that combined with sun reflecting on white objects start the fire. OR you know, some dude staff or forehead band that have some glass or jewellery.

And the fire don't last long as the oxygen is very fast burned.

Bonus thing is that oil from husks and the husks opening in fire make for the "talking" sounds. Pop, sizzle, crackling and it all magnified and echoed in canyon walls.

Not the answer you're looking for? Browse other questions tagged science-based biology xenobiology flora creature-design .

24
How do we create an Anemone Tree?
4
How Would Organic Material Erode If Petrified
3
What modifications are needed to have tree that can create hurricane/cyclone around it?
3
What adaptations would a tree need to survive an area with monthly fires?
5
Water & Nutrient Cycle of an upside down forest
6
How much water could the Crown Chalice hold as it grows on high-up tree branches?
1
I am making a creature with sloth like claws and need to know how it would be used for climbing trees and walking
4
How would using trees as sarcophagi affect the forest?
13
Naturally flame-resistant forest climate for fire elementals?