The Grey Alien trope almost always features a disproportionately large head, which often comes in unusual shapes to boot. There's nothing wrong with the trope, large brains are cool but what baffles me is how their necks don't snap and how they don't get back pain (at least none that we've seen them complain about). Logically they would have to be properly adapted to having larger heads. Human babies for example can carry a head one third the size of their body. But some aliens have much larger heads that can be about twice or thrice the size of a human head.

What is a realistic spinal structure for a large headed alien?

The average human head weighs about 10 to 11 pounds so a grey's head would approximately 20 to 30 pounds in total. With this in mind I strongly doubt that they would look anything like your typical sci-fi alien. For extra precision about the requirements: 1. they must be bipedal 2. no cybernetic enhancements. 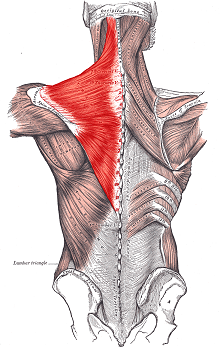 It is not only the science and the probing for the Grays. In their off hours they are total gym rats and if you mess with one it will snap you like a twig. Under their flowy robes those little guys are buff as stink. Most of all they develop their trapezius muscles - illustrated. These muscles attach to the back of the skull and lash it securely to the shoulder blades and spine. The Grays get pretty competitive about who has the sweetest traps. They are big on lats too.

4
Slow aliens: Realistic scale
12
Could humans survive on an alien generation ship?
10
Does the Triopticpelorovenatorius Baromassobrachiosaurus have a realistic muscle and bone structure?
8
Convergent Eye Structure in Aliens?
0
Is the evolution of my aliens realistic?
4
Other Mouthparts For Aliens?
5
Anatomical Review: Would the way I designed this semi arboreal Imp be biologically feasible?
8
Scaling up compound eyes, is there a size limit?