Penguins in the Not-Arctic, how would this affect the poor seals

In a not so different fantasy world, whose physics and thus are similar to our own how would including penguins affect the look and function of a typical arctic ecosystem.

For the purposes of this question, the Not-Arctic is functionally identical to our arctic, consisting of no major landmsses save a whole bunch of islands and some northern bits of larger continents below (think canada, scandinavia and/or siberia). As well its ecosystem is much the same, consisting primary of seals, polar bears, whales, krill, etc. . .

Could I add penguins to this ecosystem, without disrupting it too much. I would like them to act a bit like the penguins of south america with much lower populations mainly inhabiting some islands. But I also want to have plenty of seals and whales to hunt.

So how would penguins affect such an ecosystem and could they even evolve there in the first place.

The great auk used to live in the Arctic but was driven to extinction by humans. 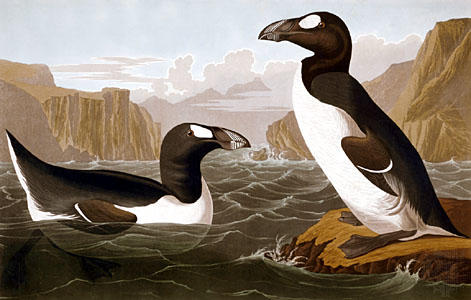 They are not technically penguins, but very similar in appearance and characteristics. You could introduce these to the Not-Arctic, or just introduce normal penguins and make the claim that if the great auk could survive before human interference, then a penguin could too.

Antarctic penguins rely on available fish in the sea, and relatively undisturbed and predator-free land areas. Their key survival trait is that they are able to live in areas which most other animals find uninhabitable. They have very few defence mechanisms other than simple avoidance.

As long as there are plentiful fish stocks they should be able to coexist with other marine predators like seals. Your main challenge would be to create a land area without predators, where the penguins can rest and breed. Most land masses in the arctic have terrestrial predators like arctic foxes and eagles. Penguins on land, and especially their eggs, would be very vulnerable to these predators.

I would suggest that you create a few islands in the very coldest ranges of your world, too far from other land for terrestrial animals to swim there, and too cold for flying birds. Or there could be other mechanisms keeping predators off the island, such as disease, tricky geography, or hard-to-navigate ocean currents.

Alternately, you could give the penguins a better survival trait in your world, such as giving them better speed on land, or the ability to better fight an attacker (usually with claws or a stronger beak).

There are also many penguins that don’t live in Antarctica, and they can live as far north as the Galápagos Islands in the northern hemisphere. I believe penguins outside Antarctica rely on large colonies to hide in a group, but I don’t know a lot about it.

Not the answer you're looking for? Browse other questions tagged biology earth-like ecology avian arctic .

4
If mountain lions were Griffins, how would it affect other animals?
4
How would visible habited planets affect technology?
4
Rabies is now waterborne. How does this affect agriculture?
7
How would a large arctic mountain range affect the weather?
1
Age Reversal Accident - how will this affect the person?
7
How would coral reefs thrive on this super-earth world?
2
How would giant penguins affect the arctic/Antarctic ecosystem?
19
How can a portal that connects two planets affect the environment?
9
How do the eggs of birds that fly using their legs not crack?