As far as it is known, Relativistic Kill Vehicles are a common weapon in science fiction and are rendered as powerful as nukes just due to their kinetic energy alone, a finite mass being propelled at a portion of lightspeed. 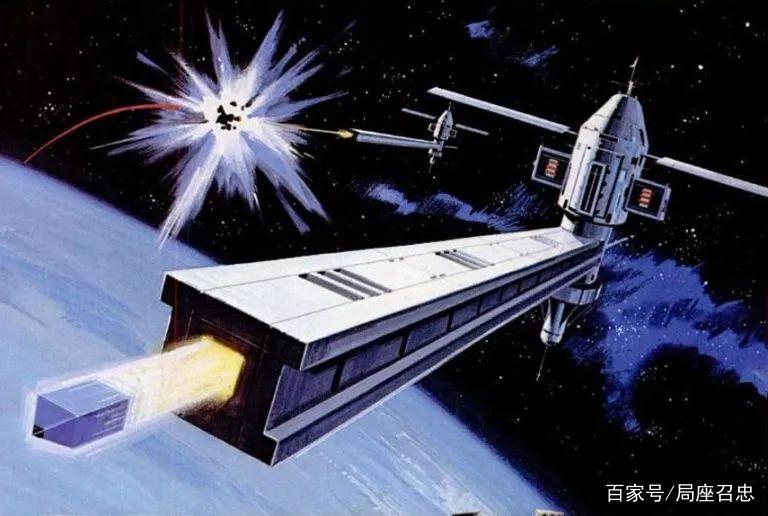 However, one thing that has never been questioned is its feasibility, and thus I ask if it is possible to construct such a weapon.

Any percentage of lightspeed is fine, as long as it is above 1% lightspeed.

Pfft. Unless you can get a Lorentz factor of at least two, it doesn't deserve to be called a relativistic kill weapon.

The bullet should not have any rockets, and only a starting spark or propellant is allowed.

Happily, relativistic rockets are harder to make than relativistic guns, because physics hates you and your toys, as Tsiolkovsky has observed.

I'm going to blatantly abuse the wiggle room allowed by "starting spark" and break out Jordin Kare's sailbeam interstellar propulsion system. As many have observed, going fast enough for interstellar travel, even a puny 0.1c, is really hard, and using rockets is basically a terrible idea if you want to go faster.

The sailbeam is a laser-driven light sail system, that uses a powerful laser (the "spark") to drive a stream of small sails made of suitable dielectric materials (the "propellant") to considerable speeds. The performance limits of such a thing are mindboggling... Kare suggests that maximum acceleration of a sail could be 32 million gravities (or zero to lightspeed in .97 seconds) though practical implementations probably aren't going to hit those sorts of levels.

The whole idea of the sailbeam was that each sail can be efficiently ionised and then deflected by a magnetic shield to transfer momentum, which is obviously not what you want. Instead of using the stream of relativistic lightsails directly, you bounce them off a magnetic shield behind the actual kill vehicle to drive that up to relativistic velocities. That can be a lot heavier and denser (making it impractical to deflect with mere human-generated magnetic fields) and might also have other useful adaptations like having a bursting charge to turn into a cloud of debris that is impractical to intercept. Lots of possibilities.

Sure, it doesn't look much like a "gun", but that's a good thing because guns of the conventional kind cannot possibly do what you want... too big, too hot, to inefficient. Nonetheless, it clearly ain't a rocket.

(and to those who might ask "why not just use the laser?" this could hit a target at arbitrary ranges, whereas all lasers will be diffraction limited and have finite ranges, or have planet- or star-sized optical elements)

Do note the size of this system... you probably want at least a light-second's worth of space for the sail "runway", which is about 300000km, plus sufficient distance for your kill-vehicle to get up to speed. The latter is likely to be much longer, as accelerations will be quite a few orders of magnitude lower. That gives "barrel" length of a few tens of millions of kilometres (light minutes) depending on how fast you want your projectile to go. That's why you don't want a physical barrel on this sort of weapon!

It depends on what counts as a bullet. A synchrotron can easily accelerate a proton to relativistic speeds, does that count as a bullet? Probably not, but how big must the bullet be? As this is critically important to the calculation.

It would be possible theoretically to accelerate a much larger object such as a magnetic bullet using synchrotron type technology but the practical problems are immense making the whole thing impractical.

The first issue would be acceleration, in order to build up enough speed in a reasonable time the accelerating force would need to be astronomical and/or the radius of the gun would need to be on a similar scale. And once a bullet has been powered up to such velocity it would be difficult to aim except in the plane of rotation.

Not easy, but doable (with unlimited resources).

This is what I would go for. (Caution, awesome MS paint skills) 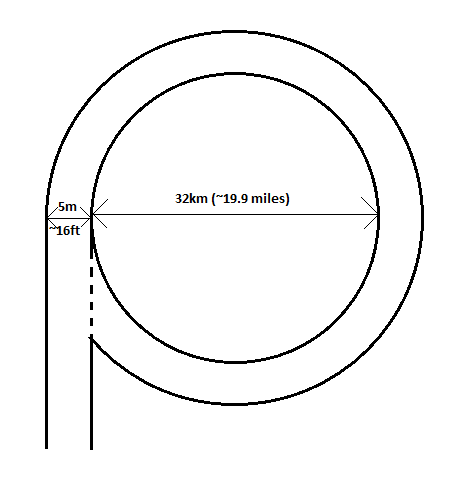 I would go for a design not unlike the large hadron collider, only with a twist. The ship would have a diameter of 32km giving it a radius of just over 100km. This means that at .01c the projectile takes approximately 0.034 seconds to make a full revolution. Assumed you can switch the magnetic fields guiding the projectile within that time window to have it exit the straight "nozzle".

To counteract the inertia created by the projectile, one simply places thrusters in opposite direction the projectile is propelled.

The bigger problem would be the time you have to switch your fields to get the projectile from the loop into the muzzle. A full revolution at only 1%c takes only about 0,034 seconds. It'd take some really fancy electronics and programming to get this done accurately and quick enough.

But by far the biggest problem is the scale of this project. It's an absolute monstrocity and would cost an obscene amount of resources to get built in orbit. Not to mention to fuel cost to orient and maneuver this thing. Using this as a weapon would only work if it can be properly protected from enemies who also have access to advanced weaponry and could take this thing out with conventional and far less convoluted weapons.

Conclusion: However fun a weapon might be, it's not particularly practical unless this thing can be properly protected from assaults with support units... Or it could be part of a death star if you want to take a route like that.

Solid vehicle relativistic weapons may not actually be able to exist. As matter approaches the speed of light, several models of quantum mechanics predict that the the "shape" of the probability cloud changes when an atom moves faster. This predicted effect is caused by the inability of the electron to exceed the speed of light forcing its orbital to become lopsided. The lopsidedness would cause complex molecules and crystalline structures to become unstable, and form a state of matter that behaves more like plasma when it leaves the barrel. I can not find any current research that proves or disproves this phenomenon; so, I will try to answer this question using the more conservative assumption of what is the "best way to make a relativistic compacted direct fire weapon" (doable) rather than "the best way to make a relativistic kill vehicle" (maybe not doable).

Most technologies able to accelerate things to relativistic speeds involve GIANT magnetic accelerators. But in space, mass is expensive making that super impractical, as Hyfnae points out.

The good (bad?) news is that there is an emerging technology that could be used to make reasonably scaled relativistic weapons. Laser accelerators can take a small coil full of matter that is already in its plasma state and accelerate it to much greater speed and precision than bulky magnet accelerators. Unlike normal solid matter, plasma can become extraordinarily ionized making it much easier to manipulate with electromagnetic forces. In 2014, the National Accelerator Laboratory, in Menlo Park, CA built a laser accelerator that was only 30cm long and could reach much higher speeds than most giant accelerators.

This means the ideal material for your "kill vehicle" is probably an ionized cold plasma cloud made of something that expands relatively slowly in its plasma state like xenon, neon, or helium.

The ideal speed to maximize damage for your energy input is technically somewhere around 0.6-0.7C. Faster than that and your matter becomes less reactive with normal matter and a lot of your energy will just pass right through the target and be wasted... That said, maximum damage is not necessarily the best weapon here. Because matter can only travel at 1C, as you get really close to 1C your plasma stops being able to dissipate. It basically time dilates into an almost "solid" mass. For example, at 0.99995C, you have a Lorentz factor of 100 meaning that something like Xenon plasma would only expand ~1.8 meters per second. At that speed, your Xenon pulse will be more like getting shot by a nuclear powered x-ray than a bullet, but even if the targeted ship does not exactly explode in a giant nuclear blast, your shot will still empart so much energy into the collisions that do happen that you can still cause devastating damage.

Then there is the ever common question that comes up with relativistic weapons: "Why not just use a laser?" Well anything that fires at 0.99995C might as well be called a laser except for one key element. Ballistic damage is a function of how much energy you can focus into the smallest amount of space and time as possible. Shining a flashlight at someone for a few hours won't hurt them, but translate the energy of that light into kinetic energy and compress it into a fraction of a second and you are are talking about giving someone a gunshot wound. Similarly, These plasma accelerators impart the energy of lasers over time into the plasma's kinetic energy. You might spend several seconds, minutes, hours, whatever charging up the plasma to its full speed, but once released, you are emptying a coil that might only be a few meters long at a speed of 300,000km/s thus turning your flashlight into a gun.