The students have blown up the school using stuff that looks like snow. How?

In Hungarian, there is a new-ish folk-song sung by school-children who dislike school whenever it snows to the tune of Twinkle, twinkle, little star:

It would roughly translate to the following:

The fluffy dynamite is falling,

let us blow up the school.

Every child can hardly wait

for the teacher(s) to go flying.

Now this raises a few questions, like what is wrong with these children, but we aren't talking about that.

What explosive could potentially end up falling from the sky in a snow-like form? The less human intervention needed, the better (I mean, you could fly a plane over and dump it, but that's cheating).

It should be powerful enough to blow up a small school with less than a cubic meter of the stuff (a rough estimate of how much a schoolyard full of kids can collect and smuggle in without being apprehended).

This phenomenon is happening on a planet that looks like Earth, and has humans. So, blue sky, 1G gravity, and inhabitable by humans. If you want, you can put it on another planet, but the teachers need to be taken by surprise, so this is not a regular occurrence.

Triacetone Triperoxide (aka TATP) was made famous several years ago by the "shoe bomber" -- who tried to light his shoes to blow up the plane he was flying in after filling them with this material before boarding. It's very easy to make (three easily obtained ingredients), and forms as a snow-like precipitate in the solution. It's a primary explosive -- that is, it doesn't require a detonation to initiate (the way, for instance, ammonium nitrate explosives do), but can be set off by simple ignition, impact, or friction.

It is too sensitive for commercial applications (there are other primary explosives that work as well to initiate a blast and are much safer to handle and store), but has long been a favorite of Internet chat rooms and newsgroups where the inexperienced gather to talk about blowing stuff up.

For this material to form "naturally" and fall from the sky as snow would take a very unusual confluence of conditions -- but I could almost see it happening in the old Soviet Union or late 20th century China.

You'd need an industrial ventilator, like a fume hood, blowing acetone into the air -- air already containing a suitable catalyst (perhaps another industrial pollutant from somewhere that isn't usually upwind) to replace the peroxide and acid catalyst usually used, and prompt the acetone to form is peroxide from atmospheric oxygen (solar UV would probably help here). And you'd need a LOT of both chemicals, to form vapor concentrations high enough to react and produce visible fall of the end product.

Worth noting that the kids are far more likely to blow their own hands or faces off (doing things like packing snowballs), or simply blow up the entire schoolyard with this stuff than to smuggle it inside and blow up the school -- but it wouldn't take anything like a cubic meter to do the job; a few kilograms -- one small snowman -- would be sufficient to level the school I attended from 2nd through 8th grades (concrete block construction, three classrooms and a gym/auditorium).

DISCLAIMER: DON'T TRY THIS AT HOME, SCHOOL OR WHEREVER YOUR YOUNG AGE TAKES YOU

You are looking for a dust explosions, which can be caused by

But about dust explosions:

A dust explosion is the rapid combustion of fine particles suspended in the air within an enclosed location. Dust explosions can occur where any dispersed powdered combustible material is present in high-enough concentrations in the atmosphere or other oxidizing gaseous medium, such as pure oxygen. In cases when fuel plays the role of a combustible material, the explosion is known as a fuel-air explosion. Dust explosions are a frequent hazard in coal mines, grain elevators, and other industrial environments.

There are five necessary conditions for a dust explosion:

Someone dusting a room with a bag of flour and putting a spark/flame (a candle?) in it sounds like the perfect occurrence of the five conditions above.

And any white dust can be confused with snow...

The most popular explosives are already crystallized like snowflakes.

So the right mix of this two at near zero temperatures can be (extremely cautiously!) formed into a snowball (with rubber gloves) and thrown. You may also try to ski on it. If you are slow enough (about snail pace) you might survive (friction is one of ignition factors).

Guncotton is a form of nitrocellulose made from cotton wool. It looks white and fluffy. It's historically been used as a propellant rather than a high explosive, but was used for blasting and I think as a teacher-launching substance that's close enough. Jules Verne was a fan, using it in many stories; it was invented around the time he was writing. 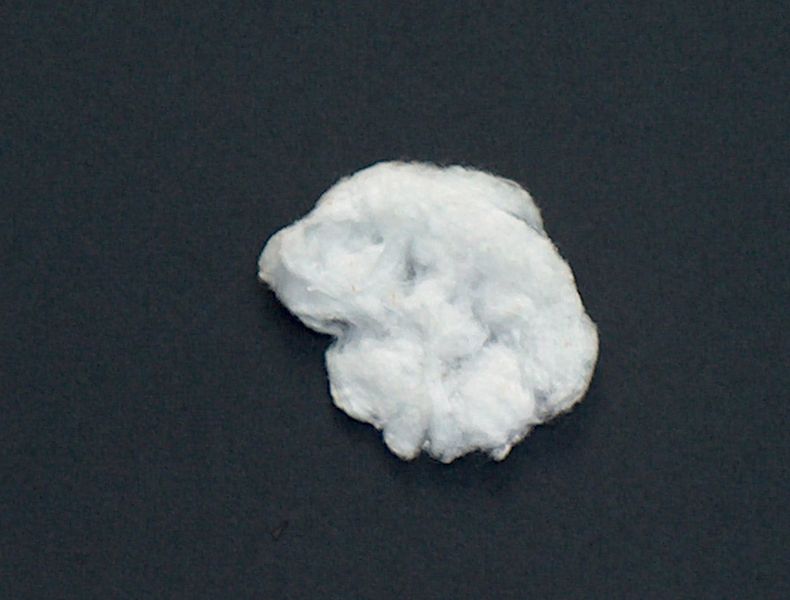 Picture from Wikipedia, user Fabexplosive. This was the best image I could find with a suitable licence; other images look more snow-like

Well, there's napthalene. AKA mothballs, napthalene is pretty widely available as an insect repellent. It's also explosive, especially when you shave the stuff into flakes. Napthalene bombs are used as pyrotechnics in movies to provide that nice big satisfying fireball.

Only problem is, it's used in the movie biz because it's a lot safer and less damaging than other pyrotechnics, so you can use it around structures you can't actually demolish as part of filming, and closer to people than a propane or gasoline pyrotechnic. So using it to blow up a school, especially one made of reinforced cinder block, might be a bit iffy.

It's also not something that occurs naturally in enough bulk to snow in any universe that also contains humans.

Lets add a plant. We already have examples of wind-dispersed seeds, this plant takes that to the extreme--the seeds are encased in a very lightweight structure to increase their surface area so the wind blows them better. Furthermore, the plant wants to maximize the dispersion--the seeds are encased until the plant is subjected to winds above a certain speed--the threshold being a major storm.

Hence when a big storm comes through every plant releases their seeds--if you have enough plants you have bazillions of seeds all at once and brought by a storm at that. While the support structures aren't dust per se they have the very high surface area to mass that's required, and they're fluffy enough that the oxygen is already there, no need for them to be puffed into the air.

11
What kind of substance that existed in the Middle Ages could, when ignited, potentially destroy everything within several miles?

7
How do nanites get the resources that they need?
8
How would childhood be affected by the fact that babies are born with the knowledge of an average adult?
1
How would a girl that has never encountered the concept of pregnancy react to giving birth?
3
How can I oversee the logistics of a sinister operation that operate under one umbrella organization?
8
How could a human habitable planet naturally have a Titan like haze?
14
Are there any heavier-than-air gases that could be made using medieval tech and have military applications?
4
My creature's cells mix water and some of the stuff in pee to cool themselves. How does it get that stuff to its cells?