What would happen if all stars disappeared?

I'm imagining a hypothetical scenario based on the Big Rip theory of the end of the universe (https://en.wikipedia.org/wiki/Big_Rip), where eventually the expansion of the universe causes everything to fly apart from each other. In my framework, humans harness a kind of magic which affects the rate of expansion, and use it to power their civilization. Unbeknownst to them however, is that they are radically increasing the rate of expansion, to the point where over the span of say a century, their local galaxy unbinds and a night sky previously lit by millions of stars goes dark over the course of say a century. At this point I am going to have a sort of magical collapse which ends the use of that magic and slows the rate of increase of the universe back to the original level.

I haven't decided yet if there is a moon present or not, I am thinking yes because I want to make this as earthlike a place as possible, but I am trying to figure out what effects the disappearance of all stars over an approx 50-100 year period would have on human civilization, ecology, wildlife, etc.

For instance, I'm imagining huge effects in human culture regarding religion and superstition (new cults formed, prophets prophesying the end times, mass unrest, etc). But I'm not sure what would happen to the ecology of the world. Would the disappearance of the stars have any effect on weather, climate, animal/plant life? Also, I am imagining the night would be much darker when the moon is low or new moon phase...what effects might this have on human or animal behaviors?

Finally, same as all of the above questions, but sans moon, which I assume would be a much more drastic change, as without a moon in the sky the stars provide the only light there is, whereas without the stars at least you still have a moon when it's visible.

Stars disappearing would be horrifying

First, let's clear some stuff up. Starlight isn't exactly essential, and it's also a good deal less useful than moonlight. Also, somewhat humorously, a great deal of non-lunar light in the night sky is provided by planets (Mar, Venus, Jupiter, etc.). Not much of an impact there.

It wouldn't be great for civilization, because stars are a really great method of navigating during the night. But so are things like compasses, and you've given your people magic, so while the stars disappearing might wreck a few ships when it first happens, people would adjust.

The real problem is that the people don't know why the stars are disappearing, and that is absolutely horrifying. Our modern culture would basically be panicking to no end, searching for an explanation with the inevitable dread that we'd be next and a somewhat apocalyptic mood would descend on the cultural consciousness. I wouldn't expect it to be pretty, humans as a collective don't react well to danger unless they're given clear guidelines. And, as such, the time would be ripe for a smooth-talking cult leader to give said guidelines, and those typically don't end well, especially not if they're explicitly doomsday cults.

Incidentally, this happening before we knew that stars were identical to our Sun would also be horrifying because any culture at that point would be far more superstitious and thus more likely to believe this is in preparation of a doomsday event. (And, yes, this answer is heavily based on the novel Nightfall, just in reverse.)

If this is a modern society, satellites may suffer. A commonly used device on a satellite is a star tracker. They are used to figure out absolute orientation information by using cameras pointed at the stars 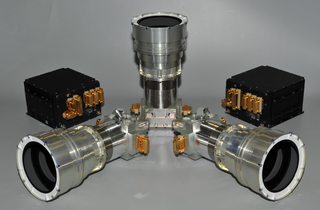 I do not know what proportion of satellites rely on these, but from the sounds of it, its a very popular device that's been relied upon for over 50 years.

If the stars all went out, these devices would cease to function. How robust a satellite is to this is probably something that would have to be explored on a case by case basis, but I would expect some constellations to cease functioning. As a general rule, robustness is expensive, especially at $55,000/kg, which is where it's been until SpaceX shattered that pricing. Satellite developers have to play some mighty cost/benefit analysis games when it comes to picking the right robustness. Almost certainly constellations have a fallback "if the star tracker breaks, the rest of the constellation will have to pick up the slack," but probably did not have a contingency in place to deal with all of the stars turning off at once, affecting every satellite.

The far stars wouldn't be a problem. In most cities, we can't see them anyway because of our "light pollution". Maybe there are still a few people who use them for navigation, but most people use GPS nowadays.

The real big problem is, that our sun is a star, too. If the sun suddenly disappears or becomes dark, the world would be dark and would become really cold within a few hours. There might be some preppers out there that could survive that situation for a few months or even years, but most living beings on earth would die within a few days and there might be nobody who survives for longer than 10 years.

16
How can my accidental time travelers determine the year using star/stars?
5
Eight solar systems orbiting a black hole, what does the night sky look like?
16
What would we see of a devastating interstellar war between alien civilizations within 1000 Ly?
4
How can the entire universe be mapped?
3
How long can a moon remain non-spherical, and what might it look like when full?
26
How can a planet have a deadly eclipse-like "spotlight"?
6
At What Point Does a World's Twin Planet Disappear, from the Viewer's Perspective?
7
What is the largest dragon that could take off without destroying the planet?
2
Calendar-Worthy Events on a no-axial spin distant future Earth