How can a large creature be deceptively fast?

So as I was creating a variety of creatures I wondered if speed is exclusive to smaller creatures or if a large organism could move deceptively fast to take prey or predator by surprise. This is assuming the creature has the mass of an elephant (about 2 to 6 tons) but its body plan can be anything as long as it accommodates for the need for speed. The reason for this adaptation is probably due to predation and that the creature hasn't developed other survival mechanisms. I have not yet settled on wether I want a prey or predator but for the time being we can leave that aside, It's not like lions and antelopes run all the time.

How can a creature move fast for its size? What would its body look like?

The answer does not have to be if this could evolve just if this is possible within our knowledge of physics and biology. Any comment to help improve this question is welcome.

What makes the speed "deceptive"?

Large animals can be fast, obviously. I'm larger than my kids, and I can run faster than them. Longer legs, stronger muscles, more leverage, etc. In general, I would bet on the larger animal in any kind of a contest, unless the smaller one is a bird.

So, let's consider what might make an animal "deceptively" fast? Maybe, there are things about it that make you think, instinctively, that it would be slow. It could be an animal that looks round and "fat", like a hippo or elephant, so you might instinctively think of it as gentle. Until one is running at you!

Or it may be that the animal is somewhat lazy except for a small amount of its time. A lion, or maybe a gorilla, spends most of its time lying around watching the world go by. If you've only ever seen a lion or gorilla in the zoo, you might be deceived into thinking it's a slow-moving animal. What a surprise when you meet one in a dark alley at night!

Or perhaps it's simply that the animal is so big, it takes fewer steps to go the same speed. An eagle flaps its wings a lot less than a hummingbird. A horse takes fewer, longer strides than a mouse. Especially if the large animal is seen from far away, where you can't perceive its speed well, it may appear to be moving at a rather leisurely pace. Only when it gets close do you notice how fast it's really moving.

At rest the furca is held within a ventral groove of the abdomen. At the time of the jump the furca moves from this resting (retracted) position to the extended position. Based on morphological and kinematic observations (there is no direct experimental evidence) it appears that as the furca moves it compresses a “spring”. After it passes a critical point of extension the spring releases all the energy, which in turn causes the springing organ to snap out at high speed. If this happens as the springing organ hits a substrate a force is created that propels the animal upward. 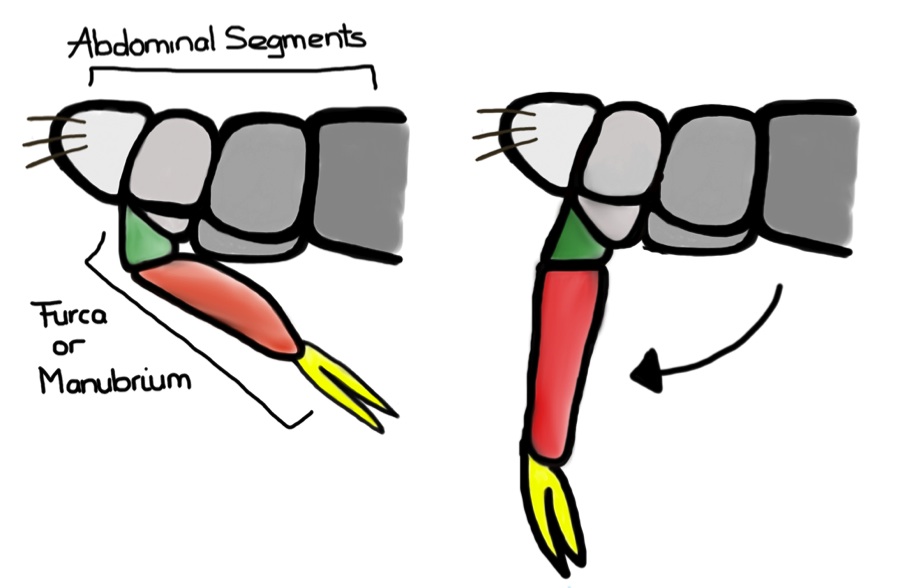 Scaling this up to a large animal would be impressive and dangerous. Your large animal would store muscular energy in a spring organ and on deploying it, be fired like a crossbow bolt much faster than it (or any other animal) could run using legs.

The springtails have no control over the direction in which they are thrown except it is to somewhere else, which serves the purpose. Since your goal is "surprising" you could keep that - your large animal surprises those in the vicinity when it suddenly hurtles away in a random direction. The animal itself may also be surprised, especially if the spring is controlled by some autonomous and involuntary mechanism.

The beast is large, but not very heavy. It has a tough outter carapace (think a spiders abdomen), the actual inner organs are packaged into a smaller body inside. The Carapace is filled with air, the body hangs off muscle strands strategically attached to the carapace.

The outter limbs are do relativly little work, for sudden movements the body is moved inside te carapace into the right direction, then jolted back to support the pounce. Only works for really short jumps (smaller than size of the carapace). I also don't see how this could copme about evolutionary. But it's deceptive!

Inspired by the mimics from edge of tomorrow: These move by throwing tentacles into many directions, then pulling themselves with one of them. It's hard to predict which way the beast will go, as throwing three or four tentacles doesn telegraph which way it will go.

The tentacles themselve can attach to many surfaces but otherwise are optimised to pull only. The muscle to achieve this doesnt even have to be in the tentacle. To make it more deceptive, the tentacle could also slowly and sneakily crawl somewhere and attatch itself, once it is clear which way the prey will move the right tentacle goes taut.

As well as being able to lumber along quickly you also need some degree of agility and fast acceleration or a prey can simply side-step or zig-zag their way out of trouble like a matador facing a raging bull. I'm assuming here the prey is made of similar stuff to the predator, otherwise it's like assuming 'magic'.

Maybe your creature could have long agile and muscular tentacles or even semi-autonomous sub-creatures that would go out and fetch the prey, like a modern swarm of drones.

Think of a pack of wild dogs that has the prey imprint downloaded to their simple brains and they are then released from within the recesses of the creature. If some don't come back or are seriously injured, they are regenerated, at some cost to the creature. The physiology and metabolism of the sub-creatures can be optimized for performance over lifetime and survival. No need for two eyes, for example. Their knowledge is downloaded, not acquired individually, so their brains can be simple.

11
Does a sapient species have to be warm-blooded, and if so, can it still be a reptile?
60
How does the Booze-Rat fuel its defensive mechanism?
6
Help me Explain this Alien's Traits
11
Best material for windsilk
1
Near spherical alien species - How can they move?
7
How to Train Your Mimic (or, why would a Mimic be capable of domestication)
3
Let's make a thunder creature!
5
What would make a bigger animal be able to fight effectively against humans with firearms
6
Could a creature use both infrasound and ultrasound?
4
How long could this wildlife habitat sustain itself?