In the isle, a game about dinosaurs and a extensive lore, there are strains (viruses)that cause or inflict different effects on the affected dinosaur.

The hypo strain is capable of making the body of any creature increase in size, making it almost twice as big as it would have originally been. It also allows for the body to heal wounds quickly, turning some would be fatal injuries into minor ones. Another upside is that the host develops a thick armor plating around its body, which is hard enough to deflect some minor bullets.

One extreme downside to having this strain is that it causes the host to have a accelerated metabolism, which forces them into almost constantly needing to feed. This strain will also cause herbivore to turn into very aggressive versions of themselves, and will sometimes cause them to eat meat. It also causes the body to change its towards more dull or dark reddish colors.

The hypo- prefix generally means below (eg. hypodermic) or reduced or deficient (eg. hypoxic). I'm not gonna tell you that you can't use whatever random cool-sounding bit of Greek and do whatever you like with it, but, y'know, words have meanings and not sticking to them is at best, a bit weird.

making it almost twice as big as it would have originally been.

Assuming a species with determinate growth (eg. they stop growing in adulthood) infection during adolescence could induce something like gigantism. Note that this comes with a whole raft of problematic side effects, health problems and usually results in death much sooner that would normally be expected.

It also allows for the body to heal wounds quickly, turning some would be fatal injuries into minor ones.

Everything already heals as quickly as it can, because being injured is obviously bad. Tradeoffs could perhaps be made... faster clotting at the risk of thrombosis, perhaps.

Another upside is that the host develops a thick armor plating around its body, which is hard enough to deflect some minor bullets.

I'm not sure what a minor bullet is, but I suppose it might be possible to induce growth of thicker bone and more leathery skin and (if applicable) chunkier scales... but all of that will come at a cost to flexibility and mobility. TANSTAAFL, and all that. Well armoured species have evolved an entire bodyplan to facilitate the growth of their armour, support its weight, and allow them sufficient mobility. You can't trivially encode all that in a little virus, and certainly not for a virus that affects multiple species.

One extreme downside to having this strain is that it causes the host to have a accelerated metabolism, which forces them into almost constantly needing to feed. This strain will also cause herbivore to turn into very aggressive versions of themselves, and will sometimes cause them to eat meat.

This seems just fine to me, and is about the most plausible thing in this whole idea.

Plenty of herbivores will already tuck into meat when it is available; they're not geared up for hunting, obviously, but scavenging is not out of the question. 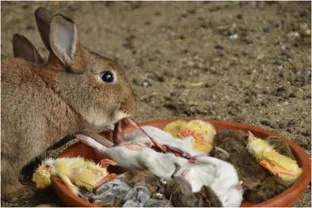 It also causes the body to change its towards more dull or dark reddish colors.

Could such a virus feasibly exist

Doubt it. We have a huge variety of species and viral strains on earth, and there's no indication that anything like this has existed. That said, a virus that induces aggression isn't unreasonable (rabies can do this) and weird congenital physiological changes are also not out of the question that might include gigantism and "armour" in children of infected animals. Developing those physical changes in an adult on the other hand, seems almost entirely implausible.

If not, could such a virus ever be created in a lab setting

Sufficiently advanced technology is of course indistinguishable from magic, so in that regard: sure, magic could do everything you want. It is magic, after all.

What seems more practical is to have a species that is already prone to these sorts of changes, and use a virus to trigger them. This still won't get you eg. massive growth in adulthood of a species with determinate growth limits, however, and a body which has developed without armour is likely to be hindered by its sudden appearance.

This might be the single most effective killer strain of a single individual I've ever seen.

Our bodies are capable of speeding up the metabolism of their mytochondria, the symbiotic organisms that generate most of the cells energy. In fact it can speed this up by more than a factor of a thousand and people would need a hamburger a minute to sustain that. So why doesnt our body do that?

Your metabolism creates heat. The smallest mice can survive this because their skin surface area where they lose heat from is very large compared to their body, but a human would cook its own cells to death. But dont worry! Instead of convenient extra sweat glands and skin to lose heat you've replaced it with armor!

The increased regenerative properties are also problematic. Regeneration is a complex process that includes transport of materials and waste material to and from the damaged area. Having to heal a deep cut in a few seconds would require your blood to pulse through your bloodvessles at bullet like speed, rupturing everything. Besides that again this will generate a ludicrous amount of heat.

Herbivores eating habits would kill them. As an example a cow is a multi-stomach chemical factory that requires a ton of food and more importantly time to convert the plantmatter to energy. Speeding up that process costs energy, meaning you need more food to get the same amount of energy as before but you also have a faster metabolism AND a larger size so you need more food to begin with and now you need to accelerate the food digestion so fast that you get less energy from the food than it costs so you switch to an all-meat menu but there's less herbivores and more carnivores now so competition will be fierce and you'll die.

Virusses also work on the basis that they force cells to copy them, then spread to other animals before the body manages to find an effective way to kill them. Your virus does not do this as it is basically permanent to the host it is killing and spends more time changing the host than copying itself.

So here's how the virus strain will work:

You get infected and the virus starts to spread. As it takes effect the infected area's will heat up until they die off. The body does not make a distinction between how a cell dies to heat, so according to your body those area's are BURNING ALIVE. If you are lucky the virus spreads to your heart fast enough that you dont feel the slowest burning death kill you and causes your heart to go into overdrive to try and heal those wounds, causing either a heart attack or for the heart, aorta and vena cava to rupture and kill you. If for some reason that doesnt kill you, you now need to basically sit at a buffet table and only spendt time grabbing cooked meat and stuffing your face as a few minutes of walking and your body dies from starvation. The virus has no chance to spread to others and you've just killed one individual.

Not the answer you're looking for? Browse other questions tagged science-based reality-check viruses .