Could I build a nuclear reactor based on Bernoulli's principle?

So I was recently inspired by the answers that I saw on this stack exchange to the following question: Feasibility of H.G. Wells' Continuously-Exploding Atomic Bombs

And it occurred to me that you can make the core as hot as you want, as long as it doesn't touch anything. So, envisioning ping pong balls hovering on hair dryers (via Bernoulli's principle), I was wondering if you could build a reactor where a mass of uranium is left hovering in a (fast-moving) column of coolant inside a larger tank. The motion of the liquid serves to cool the core, as well as keep it in place in the vessel. Incidentally, if you use many smaller uranium pellets in the core, and they are held together in this column by Bernoulli's principle, you might be able to stop the reaction by slowing down the coolant flow and letting them all fall down and separate.

So, is it possible to build a reactor based on these ideas?

Of course you could, but it's a VERY bad idea...

With enough time and money, such an engineering feat as that you have just described is surmountable. You could certainly design and build a nuclear power plant that does this, but no sane person who has the expertise to design a nuclear reactor would ever do this. It is the equivalent of spending a fortune to have all the seatbelts, airbags and crumple zones taken out of your modern car.

Modern nuclear reactors work on a fail-safe design. They actually need power to keep the reactor operational. There's more to it than this of course, but basically the control rods are set so that without power, they fall into a position that controls and limits the reaction of the nuclear fuel. They require power to be raised out of the way so as to let the reaction build up. That means that if the power to the reactor fails for any reason, the reaction stops rather than building up to a critical mass and melting down the reactor.

Your design does the exact opposite. It basically requires power to slow the reaction, not the other way around. In short, while you have power you can control your reaction quite well and in a visually spectacular manner, but if your power cuts out for any reason, or you get a mechanical failure to your coolant fans, or any other problem, your reaction rate and temperature actually starts to increase. You'd end up with a meltdown.

In short, you want your reactor to fail safely, or in other words fail in a way that the default position of the reactor without power or during a mechanical breakdown of some sort means that the reaction stops. This design only allows the reaction to be controlled IF the reactor is operating correctly. At your first failure in the plant, you are going to have a really bad day.

Your design seems like an absolute safety nightmare. I'll also note that your safety idea of the little fuel pellets separating when the air flow is removed rather depends on them not being so hot that they start melting, which rather defeats the whole point of the exercise.

The underlying idea, though, that if you remove the tiresome need to avoid melting your reactor down into deadly slag you can run it really hot and so gain all sorts of efficiency gains and various other benefits is a) quite true and b) something that people have looked into, though not necessarily for the purposes you were thinking of.

Operating such a thing inside a gravity well, such as on the surface of Earth, is a pretty terrible idea, because any sort of failure will ruin your reactor as a load of very hot, intensely radioactive gloop sloshes onto the floor of the containment structure and melts and burns away til it cools off enough, or alternatively intense radioactive fissioning gas will rise up and plate itself all over the ceiling, burning and melting its way through as it does. The former would be indistinguishable from a meltdown, and a lot harder to avoid, and the latter is a whole new and exciting kind of catastrophe.

In space, however, you don't have to worry about gravity or even convection, if you don't want to. Hell, in an emergency, there's the option of blowing out the reactor core into space where it won't do anyone any harm (not recommended in orbit around a planet. or possibly even in a planetary magnetosphere. or near other ships. etc). 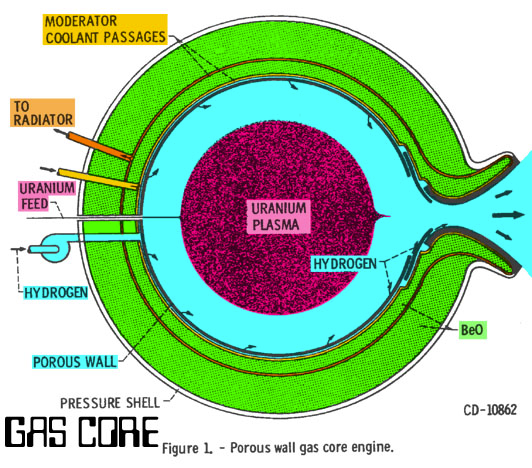 (image from Project Rho, more information on this and many other nuclear rocket designs at the link)

You can run your reactor at a fairly toasty 55000K, and the only compromise you have to make is that some of the uranium plasma will leak out in with the hydrogen, but you can't make an omelette without breaking a few eggs, eh?

Keeping an object supported via a column of moving fluid requires that the fluid is moving upwards at the terminal speed of the object. Uranium and plutonium are crazy dense, and spherical pellets are not going to offer much aerodynamic resistance, so you'd either need to use molten salts or some other very dense fluid as your coolant or very small fuel pellets that can be kept aloft by water in order to keep the required jet speed manageable.

The resulting design would not be very fault-tolerant, since you'd now have a critical mass of fuel which must be kept suspended continuously by a precisely-controlled jet of fluid at all times in order to function correctly. And yes, you could design the bottom of the fluid container so that a failure of the jet results in the fuel dispersing across the bottom of the container, but you'd need some way to get from that state back into a functional one with minimal outside intervention.

Either way, though, if you're going working with spherical pellets of fuel, then you might save yourself a lot of fiddling with high-powered jet pumps by building a Pebble Bed reactor instead. These use the same sort of spherical fuel pellets piled in a static bed, with an inert gas coolant flowed up through them. Used pellets are removed from the bottom, new ones are dropped in on top, and otherwise the pellets just sit there happily reacting away in their pile.

Something along those lines may be incorperated into a fusion reactor. One of the main problems with fusion is that the plasma needs to be really hot, 100,000,000 K. This will melt anything it touches so it needs to be kept away from the walls. Magnetism has been the way up to now but perhaps adding a fast flowing gas might be able to assist the magnets.

Not the answer you're looking for? Browse other questions tagged science-based chemistry science-in-society nuclear-power or ask your own question.