With a group of friends, we are trying to build an RPG in a quite specific setup which I have a hard time to find elsewhere in order to get some inspiration/information.

So what I mean by that is: a nation where most of the technology is based on using animals or at least living creatures. Things like the little devil who paints photographies in cameras in the Discworld (it's a hard world), or like the millipede subway of Ekhö.

Transportation, weapons, energy producing maybe with eel-like animals... As much of the technology as possible would be based on animals, but otherwise it would still be a modern if not contemporary setup with buildings, electricity, etc, inspired from the 50s in the real world.

So I end up with two questions :

Ever heard of the Flintstones? If you haven't, ask your parents. The show's humans largely used animals as replacement for technology. 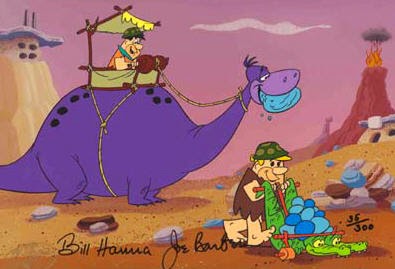 In that cartoon animals were fully sentient and willingly sold their services to humans. Sure, they were poorly paid, and the payment was... usually... inhumane, such as garbage disposal being done by feeding the trash to a cartoonish rendition of a prehistoric board. A running gag in the show was some animals saying something like "hey, it's a living!".

Other animals that I can remember from the show: "sawfish" being used as living saws, mammoths being used as water dispensers and at some point I think both hedgehogs and lobsters were used as lawnmowers. If you have access to some streaming service that has this show, it's worth watching.

As for any limitations: it really depends on what kind of fiction you are aiming for. The Flintstones was a cartoon by Hanna Barbera, with that kind of physics where you can walk on air as long as you're distracted enough to not notice you went over the edge of an abyss.

Now while you might think this does not render well in more realistic media, they did make a live action in 1994, with the dinosaurs and all working at a quarry just like in the cartoon screenshot above. I could not find a screenshot of the movie that does it justice, though.

For a more serious and realistic scenario, consider that in real life and up to today people use elephants in place of heavy machinery in many rural parts of India. 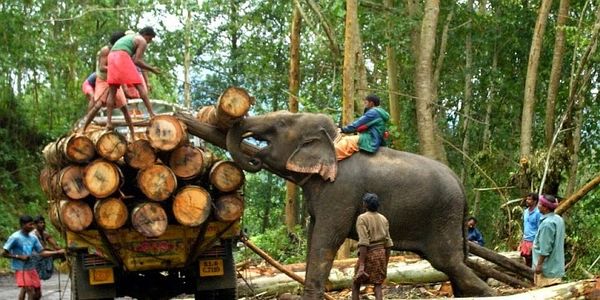 (Using elephants for logging has been illegal since 1994, and I particularly think it is cruel due to the way elephants are captured. This photo is just to illustrate that it is possible.)

As long as the animals are tame and have access to food and water, you can make things work out.

Not the answer you're looking for? Browse other questions tagged technology technological-development fauna or ask your own question.

2
Steam-Punk society with other society using only electric.
6
Production of ammo in post-apocalypse - problems and solutions
5
Technological Animal Control
13
Preconditions for 'Classical' Space Fighters and Carriers
2
Day/night cycling energy in modern weaponry
5
What would replace/be the next evolution of tanks in the future
4
What sort of weapons manufacturing could be supported by a post-apocalyptic world?