There is a concern that's been brought up only recently--steel and concrete buildings are environmentally wasteful. In further clarification, they waste away too much greenhouse gases. And considering how many steel-and-concrete skyscrapers currently exist worldwide, that is incredibly damning. Which is why some people are nowadays to the idea of a "plyscraper"--a structure made primarily of cross-laminated timber (CLT), which, unlike steel and concrete, stores carbon dioxide.

However, the focus of this question is the one recurring foe of any high-rise structure--gravity. Draw it too tall, and the force to end all forces would crush the structure down, which is why Shimizu won't be using conventional materials when they build their Mega-City Pyramid.

The shape of a building also plays a factor because of weight distribution. Shimizu was on track with a pyramid shape, as the far wider base makes the overall structure more stable, and most archaeologists can agree that the massive Tower of Babel, if it existed, wouldn't be a tower but a ziggurat, which looks different from a pyramid but still has the same principle.

So in the event of building a ziggurat out of both CLT and bamboo, what is the biggest (in regards to base width and height) that it can be without crushing under the force of gravity?

I did some search for the world's largest wooden structures. Some sources point at the Kondo, a.k.a. Great Buddha Hall as the largest one. It's about 18.5 meters tall, and 15.2 meters wide.

Technology made it possible to build bigger wood structures. The Superior Dome in Michigan is 44 meters tall (143 ft) and 163 meters wide (536 ft).

A company named Tamedia has a wooden building that is 50 meters tall (164 ft).

But the cake goes to this one: 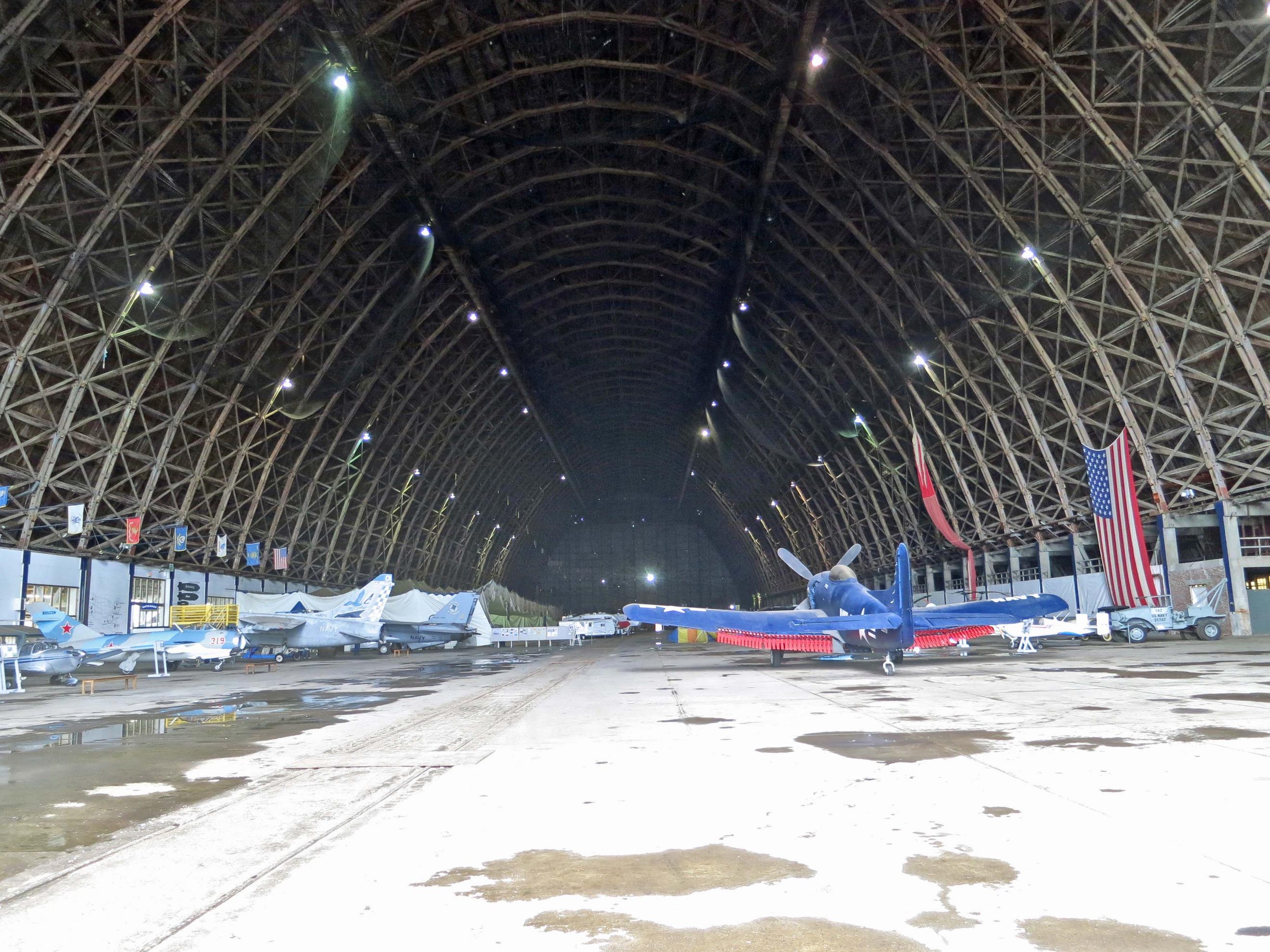 This is the Tillamook Air Museum. It was initially a hangar for zeppelins. 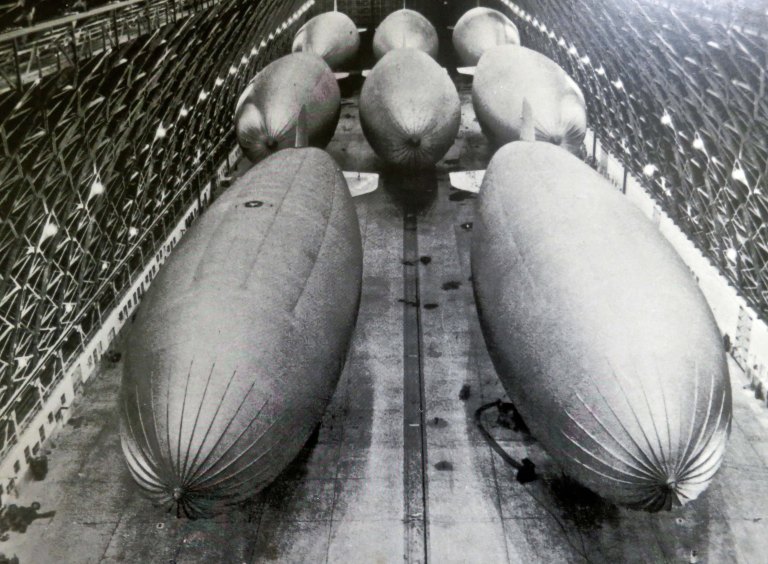 Source: same as above

For state-of-the-art in timber buildings, you can see that a lot of people are talking about (and even planning) plyscrapers that are over 300m tall. The super-tall wooden building industry isn't exactly in its infancy, but there isn't a huge amount of experience out there, and it seems like things can only improve from there.

For a very handwavey maximum, consider the compressive strength of CLT (say, 50MPa) and its density (say, 480kg/m3 for spruce... bamboo will likely be a lot denser) you'd get a simple height limit of ~10.6km. That obviously only applies to a pure CLT column with literally nothing else in it that would make it a building, and simplifies things far too much, doesn't consider the usual serious safety margins and so it probably quite an overestimate. Iit is probably out by an order of magnitude, but not two, as can be seen from already existing and currently planned wooden buildings. Whilst the number itself probably isn't very informative, it does suggest that the materials in question are certainly strong enough for most purposes. If you really wanted me to put a number on it, I'd say 1000m, but it is entirely possible that future advances in wood composites and the use of other materials in the construction could make it larger than that.

There's no real practical limit to the girth of a building; that isn't constrained by gravity so you can go wild and do what you like. It doesn't appear to be necessary at the 300m size. It mostly seems to be important for really, really massive structures such as the X-Seed 4000, a 4000m tall steel construction that would have had to deal with some quite serious environmental challenges that more sensible sized structures don't have to worry about.

I shall point out though that there's nothing about steel that has an intrinsically bad carbon footprint. It can be refined and (re)formed using nuclear or renewable electricity sources and there's obviously quite a lot of it about in existing buildings that can be recycled at some point in the future when those buildings come to the end of their useful life. Composite steel and wood buildings might not tick the bio-eco box, but there's no reason to think they'd be bad.

The tallest mostly wooden structure ever built in pre modern times was probably the legendary Yongning Pagoda at Luoyang, capital of the Northern Wei dynasty in northern China.

So it is possible, though not certain, that the Yongning Pagoda was taller than the Great Pyramid for a few decades.

It was completed in AD 516 and caught fire in 534, allegedly burning for months. Thus there is little evidence whether it could have stood for centuries or would have soon collapsed.

The tallest Pagoda built in modern times seems to be the pagoda at the Tianning Temple in Changzhou built from 2002 to 2007, which is 153.79 meters or 505 feet tall. But it does have a steel support structure so that doesn't count, I guess.

Renan's answer states that the giant hanger at the Tillmanhook Air Museum, Tillmanhook, Oregon is 326 meters or 1,072 feet tall. However, that is the length and not the height of the hanger:

The much lower actual height of 59 meters or 192 feet is still impressive.

The hanger has lasted for about 78 years since 1942 and it could last for centuries if it never catches fire like its twin did.

The Gliwice Radio Tower in Poland is the tallest existing wooden structure, 118 meters or 387 feet tall, built in 1934.

Mjøstårnet by Voll Arkitekter in Brumunddal, Norway, has been verified as the world's tallest timber building by the Council on Tall Buildings and Urban Habitat.

It has taken the title of world's tallest timber building from the 53-metre-high Brock Commons Tallwood House in Vancouver, which has a hybrid wood and concrete structure. Treet in Bergen, Norway, which is 49 metres high, used to be the tallest all timber building until Mjøstårnet completed in March 2019.

Not the answer you're looking for? Browse other questions tagged science-based materials construction megastructures mathematics or ask your own question.

29
Is there a theoretical maximum size for rocky planets?
10
The Rollercoasters of Ancient Egypt
8
Airship Aircraft Carrier Dimensions
0
Heated Brick vs. Solid Stone Brick
4
The Bamboo Skeleton
4
The Palladium Skyscraper Skeleton
4
I have made a design for creating artificial gravity on low gravity worlds for my world, does it work?
19
Lifespan of abandoned buildings