The Heptapods from ( The Arrival )

In the movie, Arrival, there is an advance alien race that arrives on are planet, with a few landing in specific places.

The aliens species are called "heptapods" (by our standards). They have 7 appendages that they use for locomotion, with each having 3 major separate bones in them. At the end of each appendage, there is a point that can split into 7 starfish like fingers. Their full body is massive, standing at a full 33 ft (10 m) tall with no visible eyes or mouth, however there are 5 to 7 orifices that serve an unknown purpose. They also seem to have a upper body that is heavily distorted an is held up by 7 appendages.

Their bodies do however sport a head-like protrusion at the top of themselves. Much like humans, their physique varies, with one a bit chubbier than the other. The bodies of the heptapods are a dull grey color and seemingly sports a rough looking texture.

The heptapods speak in a low pitched thrumming noise that can’t be deciphered by humans. Their written language seems to consist of circular shapes that consist of a ink like substances that is shot out of the appendages.

What the question is asking for:

Could such a species ever feasibly exist 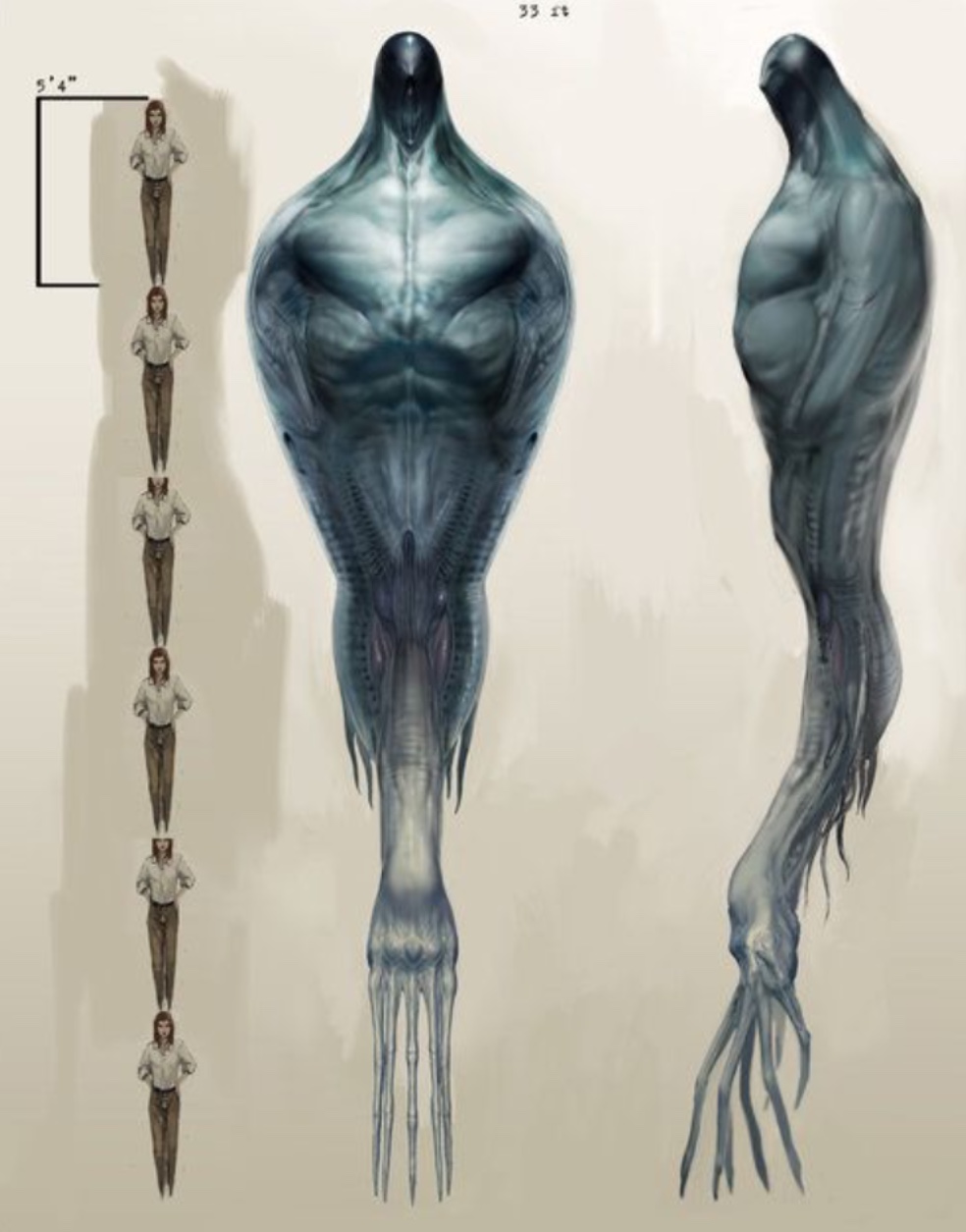 Given that in the movie, the Heptapods demonstrate that their technology is capable of gravity manipulation, we can assume that their homeworld's gravity need not be the same as ours, and given that their natural atmosphere is shown as having a very low optical visibility range, it must be denser and contain volatile compounds or perhaps other organisms in suspension. Of course, that doesn't tell us much about its composition other than that it is relatively dense, such that the heptapods move through it as if almost floating. This may be achieved by one of several different sets of conditions:

Given these naive, speculative possibilities, some can be eliminated by using other clues:

So, we have an atmospheric pressure that is closer to our atmospheric pressure than to the pressure within a tankful of water or some other liquid, probably on the order of 5 ATM at the most. In order to possess an atmosphere that thick, the planet must be relatively large, the size of Earth or larger, though not necessarily as dense as Earth or with as high a surface gravity. A surface gravity on the order of 0.5g to 1g would seem probable, most likely around 0.6g to 0.7g

That the Heptapods move more as if they dwelled in a liquid environment can be explained by their large size and buoyant body structure. In order to achieve such buoyancy, it is likely that the heptapod upper body is a structure that contains a light gas, quite possibly molecular hydrogen. That lifeforms on this world can afford to produce molecular Hydrogen is indicative that the world has a sufficiently high escape velocity that it does not rapidly lose hydrogen to space, and secondly that biological processes likely metabolise free hydrogen rapidly, minimising the amount freely available in the atmosphere. Indeed, an atmosphere high in light gases would make it difficult for the heptapods to be as buoyant as they appear to be.

Another factor in the heptapods leisurely, floaty movements may be that being buoyant, they have no need of musculature that is capable of supporting and propelling their entire mass, and being weaker cannot accelerate as quickly as humans, giving them the appearance of moving through a dense medium.

Heptapods have no obvious apparatus for devouring macroscopic food, whether sessile or motile. Their slowness would suggest that they are not predatory. There has been some speculation that they are filter-feeders, though the possibility also exists that they may use their seven limbs to scour sessile autotrophic organisms similar to algae from the ground. However, their walking cycle suggests that maximising the time that a foot remain in contact with the ground is not a priority, and their ability to use a form of jet propulsion suggests that they may indeed be filter-feeders. This supposition is backed up by the optical density of their atmosphere; they may literally be inhaling their sustenance as they attempt to communicate with the humans.

This then begs the question: What need does a filter-feeder have for sentience, much less space travel? This is the most telling point against the feasibility of the heptapods, though it is not a deal-breaker. The trait that appears to drive the evolution of intelligence is sociability as much as a complex environment. Heptapods would appear not to need to hunt their food if they are filter-feeders, but that their environment within their vessels appears to be foggy, possibly due to the ubiquitous presence of their food, is not evidence that their food is ubiquitous upon their homeworld. Indeed, their food may be more difficult to locate than their ship makes it seem, and require a certain amount of cognitive ability to be able to predict where it may be found, or to farm the source of their food. That said, that they engage in social interaction, and can both speak and write indicates that they have a sufficiently rich range of social interaction to make high intelligence a necessity, as well as having a sufficiently short lifespan to make writing a viable means of communicating with others.

The least believable thing about the heptapods is their ability to know their entire personal history, including their future, and that this prescience is somehow tied to understanding their language and can be taught to humans. However, this magical ability does not preclude the heptapods from being a relatively realistic alien lifeform in all other respects.

Sure, under the right conditions

The main restrictive issue with size is the square-cube law. But even on Earth, we've got larger creatures than these Heptapods, like whales. The trick is that whales are in the water, and the buoyancy of the water helps support their weight. The movie seems to acknowledge and address this if it makes the homeworld atmosphere a thick soup which is essentially a liquid. I'd also surmise that there's some kind of a buoyant gas sack within the chest region to help maintain that buoyancy. At a guess, I'd say these aliens have something else in common with whales - their diet. I see no signs of being a predator or photosynthesis, so I'd guess their diet is plankton-like creatures common in their soup-like atmosphere.

I don't know whether I'd realistically expect a superior tech level than humans from these creatures - for one, they don't appear to have a way to manipulate tools, unless that foot-tail thing is far more prehensile than it appears - but they could realistically exist given a planet with the right conditions. (Or, in fact, even in our own oceans.)

Not the answer you're looking for? Browse other questions tagged science-based reality-check biology xenobiology or ask your own question.

13
Pharbohydrates vs Carbohydrates
2
Would this Alien race take over?
0
Is the evolution of my aliens realistic?
1
Near spherical alien species - How can they move?
4
What kind of environment would a proto-human have to be in to evolve into the following type of species?
3
What kind of planet environment could best host aliens like *Battle: Los Angeles*?
6
Feasibility of a species based on Yog Sothoth (HP Lovecraft lore)
1
Feasibility of a species based on Nyarlethotep (of HP Lovecraft lore)
16
What biological trait could make (certain members of) an insectoid species good at astronomy?