The Fate of Marsupials in a More Southerly Australia

For the longest time, Australia and Antarctica were one and the same. It wouldn't be until 30 million years ago that Australia broke up from Antarctica. Nowadays, the distance between Australia and Antarctica is 4502 miles. But twenty million years earlier, another change occurred with global ramifications--the icing of Antarctica. This process, also known as "the Azolla Event", cut down the global rainforests of the early Eocene, leaving more room for the more diverse biomes of the late Eocene, eventually giving way to grasslands. Only one extant marsupial clade was present at the time of the Icing of Antarctica: Microbiotheria, the order that nowadays consists solely of a small, mouse-like resident of South America called the monito del monte. 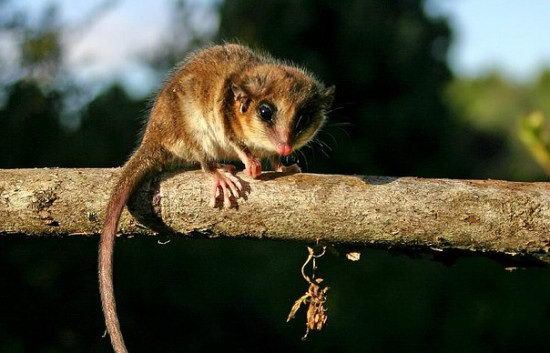 In an alternate Earth, Australia is so much closer to Antarctica that the distance between them is, compared to back home, cut by half. This would imply either that Australia broke up from Antarctica later than back home, or at the same time but at a far slower pace. Either way, this difference would mean that this alternate Australia would bear more of the brunt of the icing of Antarctica 49 million years ago. Would the ancient microbiotherians survive this transition, or would the dropping temperatures drive them into extinction?

Microbiotherians will not go extinct: they live in South America, not Australia or Antarctica.

Must be careful with these questions. From OP- here is what I am answering:

Would the ancient microbiotherians survive this transition, or would the dropping temperatures drive them into extinction?

I read about microbiotherians, which are not extinct.

The oldest microbiothere currently recognised is Khasia cordillerensis, based on fossil teeth from Early Palaeocene deposits at Tiupampa, Bolivia.

I already knew from your OP that the only currently surviving representatives of this group are in South America today. I thought maybe they wound up there somehow as refugees from Australia after the frosting event you describe. But no - they have always lived there.

Your scenario involves the icing of Antarctica, and you propose that with an altered position of Australia, Australia will become different in some way. Yes, yes, just so.

This is probably a very lackluster answer, but I don't see why they couldn't survive.

Marsupials are after all Mammals and mammals can be pretty well adapted to living in colder climates unlike their reptilian partners.

The key point will be a viable food source. Almost all life in Cold areas rely on the sea as a source of food. Polar bears hunt seals and eat whale carcasses. Penguins hunt small fish in the sea and Seals hunt penguins. Birds hunt both fish and penguins. You sort of get the idea... it all relies on the sea.

From a more Mathematically perspective, the distance from Tasmania (the lower area in Australia) to Cairns (the topmost area) is approximately 1,685 Miles. Given that you want to move Australia roughly 2250 miles down we can assume that the temperature of the new Cairns location (in winter) will be approximately in the single digits approximately -5 - 5 Celsius (Tasmania's average temperature is 3-11 degrees Celsius in winter). This is rather mild considering life in the arctic and antarctic and I see no reason why a marsupial wouldn't be able to evolve to cope with it.

Technically the marsupials living back then in the middle Eocene are all dead. Deader than a door nail, deader than a dead parrot used in a Monty Python skit.

So no they didn't survive.

They did however have descendants. Of which we do call some of them Microbiotherians. The others we call Eometatheria.

The distinction is precisely the setup you gave.

On the one hand, Microbiotherians (which currently live in South America) look almost exactly like those distant and very dead ancestral marsupials. This is because they share the same kind of lush tropical rainforest environment. The environment has maintained the same selective pressures, and having already struck on a good solution to those pressures by the middle Eocene, the descendants have stayed very similar.

On the other hand, Eometatherians where hit hard by the Azolla Event. The landscape changed and thus the selective pressures changed. Some evolved into macro fauna as large as any rhino, some developed high speed locomotion (kangaroos), some are in the process of evolving fly organs (sugar gliders), and others have converged back to forms not to dissimilar to Microbiotherians (marsupial possums), although the journey has changed them.

The slower continental drift is the only unanswered issue. The problem is that the Australidelphia are completely wiped out in Antarctica. So there is definitely an extinction zone.

The question is whether or not the Australidelphia managed to get far enough North that the Azula event was changing the environment slow enough that they could ride out the problems.

Given this map of the Eocene, and moving the continent roughly half way down toward the antarctic. The environment does indeed look grim. Most of Australia would have been within the arctic circle, or very close to it. However there is land to the north, the island of New Guinea.

As Shadowzee has pointed out in their answer, the north of Australia would not have been too far below present day Tasmania. Temperatures would theoretically be some 5-10 degrees cooler.

Also do not forget the the island of New Guinea currently has marsupials (proving that it could be traversed to) and would be roughly where Tasmania is presently under your scenario. Granted it would not be covered in a rainforest, but an aboreal forest, or temperate Forest at the height of the Azolla event would not be out of the question.

Therefor we can easily infer that New Guinea would have marsupials roughly equivalent to present day Tasmania. A macro predator the size of a small-medium dog, numerous herbivore species specialised for grass, and leaves. And also a few marsupial possums.

The northern reaches of Australia would be somewhat rougher, but would be comparable to Tasmania's present day Mountains. The forest would be thinner, and the grasslands would be seasonal tundra. Unfortunately this would probably mean that marsupial possums would not survive, not unless they evolved some form of hibernation, or squirrel like lardering.

There would be some space for an omnivoure/small predator marsupial specializing in the summer on birds, fish, amphibians burying kills for winter. If omnivorous it might survive the winter on carrion, barks, and pine needles. Presuming that Australia was far enough north, and evolution quick enough, to keep them out of the extinction zone.

Presuming Australia was completely marsupial free because of the Azolla event.

This would not have stayed the same, as Australia would still be drifting north. The Iceage that came dropped sea levels significantly, and if the environment in Northern Australia was still to inhospitable, when the environment improved (and sea levels returned) there would still be a significant and closely linked chain of islands that could facilitate Island hopping back to Australia from New Guinea when conditions improved.

The story of the Australian Mega Fauna would have been slightly delayed, and somewhat more bird orientated, but eventually the marsupials would have come back with similar basic adaptations to current day Eometatherians.

It is entirely plausible that they would become extinct - either that or be replaced or restricted.

Australia has a unique ecosystem due to several factors:

The relocation to a more southern latitude has the potential to alter all these dynamics - nothing can be certain except that the climate would alter, flora would commensurately alter and this in turn affects animals.

Eco-diversity is very interconnected with not only the environment, but also itself. One change in evolution could cascade to a myriad of other changes - all reliant on each other. Marsupials, unlike mammals, are very susceptible to climactic suitability, and indeed the only real reason why Marsupials are omnipresent in Australia is the extinction of placental mammals - for reasons not yet clear - 50 million years ago.

Given the fact that they have not expanded their influence throughout the Americas except in small niche areas, with the large variety of climate zones and latitudes existing there, it may be interpreted that it is difficult for them to compete with local mammals given alternate climactic conditions.

This may tend to suggest a similar fate in Australia, however, if the study of life has taught us anything it is that anything is possible, and perhaps the Order could survive if it could evolve around any deficiencies they may have due to the climate. There is enough time scale in your scenario to allow this to occur, if there is not too much competition.

Not the answer you're looking for? Browse other questions tagged environment alternate-earth prehistoric-times mammals or ask your own question.

0
An Earlier Pleistocene = Mass Extinction?
6
An Australia for Egg-Layers (No Marsupials)
2
The Bamboo Rainforest
7
The World's a Jungle Again. Would Doldrums Blow the Global Air?
5
Would a More Extreme Icing of Antarctica Create an Extinction Event?
6
In an Ice Age Extinction, Which Latitude Would Be Hit Harder--Tropical or Temperate?
2
Could an Ice Age Extinction Wipe Out All Marsupials?
2
Would This Chosen List of Animals Occupy the Earthworm Niche?