What events caused the formation of the 18th century Dutch-Scandinavian Republic?

I'm in the early stages of an alternate history novel (and at a push a light fantasy) in which I like the idea of a unified Scandinavian Nation/Republic to compete with Britain and France for control of the New World in the 18th/19th Century.

The inclusion of the Dutch Empire within this group or as an ally would also be desired if possible but not necessary.

Results of this union I would like to see include:

So, for the hypothetical historians out there - what factors could I manipulate to allow something like this to happen?

Feel free to delve as far back as possible to allow for these changes, so long as they don''t affect the more general course of history. Thanks for your time and sorry if this is too broad or belongs elsewhere.

In the real world, Denmark and Norway were in a union from 1536 to 1814; but Denmark decided to side with Napoleon in the Napoleonic Wars and was ultimately forced to give Norway up to its arch-rival Sweden. Sweden had a few years before lost Finland to Russia in the Finnish War 1808-09.

In an alternate world, Denmark could have chosen to instead side with the Coalition against Napoleon. Instead, Denmark could have decided to side with Sweden in the Finnish War, preserving Finland for Sweden. The price of this aid may have been a marriage between the Swedish Crown Prince Gustav and the Danish Princess Caroline. This would tie the Scandinavian countries closer together and end the ancient rivalry between Denmark and Sweden, paving the way for a new union of Denmark (including Schleswig and Holstein), Norway (including Iceland and Greenland), and Sweden (including Finland and Pommerania). This union would be a very strong power factor in Europe. It is quite possible that this union would ally with the Netherlands, with which especially Denmark have historically had close ties, though I think real union with the Netherlands would be unlikely.

Since the United States was founded in 1776, it is unlikely that this Scandinavian union would be establish colonies there, but the northern territories of what is now Canada would be another matter. In fact, some French colonies could have been conquered during the Napoleonic Wars if Scandinavia fought against France.

A possible pagan revival is a different matter, which I consider very unlikely. Christianity was very strong in Europe in the 18th and 19th centuries, and if Scandinavia converted to paganism, this would be a strong casus belli, and Scandinavia would likely be divided between Great Britian, Russia, and various German states. Nor is it likely that Viking ships would make a comeback as warships, since clinker-built ships can't be built as large as the carracks that dominated colonial times. Ornamentation inspired by Viking times could make a comeback, though.

An earlier point of departure from history could be the Great Northern War (1700–1721), which was a conflict in which a coalition led by the Tsardom of Russia successfully contested the supremacy of the Swedish Empire in Northern, Central and Eastern Europe. The initial leaders of the anti-Swedish alliance were Peter I of Russia, Frederick IV of Denmark–Norway and Augustus II the Strong of Saxony–Poland–Lithuania.

Sweden had grown very strong under Karl 11, who died young; at age 41 in 1697. He was replaced by his young son, Karl 12, who was just 15 years old. The inexperience of the young king was a major reason for attack by Sweden's opponents.

In an alternate reality, Karl 11 might have lived longer, ensuring greater stability, Karl 11's wife was the Danish princess Ulrikke Eleonore, who also died young, age 36, in 1693. If she had lived on with Karl 11, Denmark would be unlikely to go to war with Sweden - in fact, their marriage was meant to create closer bonds between the two countries. This could mean that the Great Nothern War never happened and that Russia did not gain power in the Baltics. Swedish-Danish relationships might have continued to grow warmer, resulting in a closer union.

A Big War with Germany Prussia

Unify the Scandinavian countries (including Denmark), and start a war with Prussia, or the Holy Roman Empire (depending on where in the 18th century we are). Choking off Prussia's coast line would be a powerful blow, but to do that, the Scandinavians would need help from the Dutch. Then they could turn the Wadden islands into a kind of Naval maginot line. 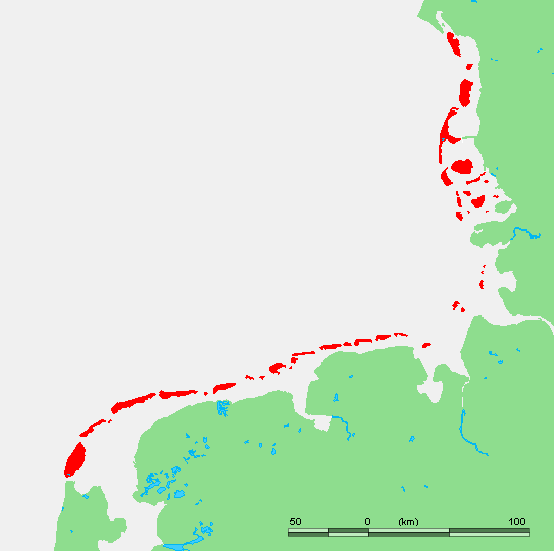 In return, the Dutch would need help to defend the Dutch-German border.

This would not be enough to keep Germany occupied, so they to be involved with plenty of other conflicts.

The Dutch navy was in decline in the 18th century, but a cash injection from the Scandinavian union might be just what was needed to return to the glory days.

Note that the Dutch have never been classical empire builders. Their motivations have usually been based on trading and economical advantage. For instance, most Dutch colonies were built to facilitate trade rather than founded on sovereignty of one country over another (although the indigenous population suffered just the same). This means that there needs to be a strong incentive to enter in to a war with a large neighbor and trading partner. It's probably best if Germany starts the war for some reason

The Seven Year's war may be a good point of divergence:

Not the answer you're looking for? Browse other questions tagged reality-check alternate-history empire-building .

6
How could a civilization with approx. 18th-century technology weaponise mined nuclear materials?
10
What events could keep Zeppelins in the air today?
4
18th century zombie scientists
4
How do I prevent the annexation of the Novgorod Republic?
0
Would dragons rule the 18th century?
23
Could a supertall building have been built in the 18th century?
4
What if Great Britain never took over the Dutch Cape Colony in 1806?
4
Steam-powered dirigibles in the late 17th to early 18th century