Could pre-New World Native Americans open a modern safe using only their tools?

Suppose you've got a standard, protect-your-important-papers type safe like this one: 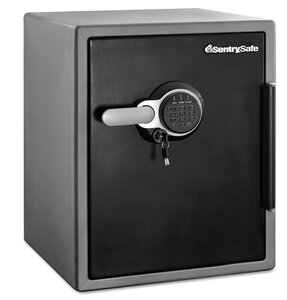 Could they open this safe using only their methods and resources?

They see this safe and they can tell that it's not just a shiny rock, but that it's hollow inside and something is rattling in there and it's designed to be opened. They want to open it to see what's in there without damaging the contents inside.

This depends very much on the safe.

A "fire safe" meant only to protect papers from a house fire would be trivial; the one I have is a fairly soft plastic shell filled with unreinforced concrete; it seals in a fire by the shell melting, effectively welding the safe shut and keeping oxygen away from the papers inside -- they may brown from the heat, but without oxygen they can't ignite or combust. Stone tools could easily defeat the simple lock on one of these, or destroy the hinge.

A more robust office safe made of steel would be a long term project. The stone tools used by most North American natives at the time they were invaded by Europeans were harder material than most steels, so could eventually make a hole or cut in the shell of a common steel safe, but it would require they know the contents are worth the effort to invest literally months of daily effort.

A heavy duty safe, like the kind used in small banks or, in the Old West setting, in frontier Wells Fargo offices or similar, would be a big problem for Native Americans still using their native tools. Metalworking wasn't at all common prior to European colonization, and stone tools are limited to the hardness of quartz. Quartz is harder than any common steel (files from the 19th century couldn't mark it, though there are modern steels that can), but if the office safe would be a multi-month project, getting into an Old West bank safe would be a generational project with the technology Native Americans had before they began obtaining metals from European colonists.

Abrasive sculpting has been known about and used around the world since prehistory. Plenty of cultures valued carvings made of very hard rocks and minerals, and manufacturing such objects without the aid of modern metals and ceramics and tools would have been very difficult but that doesn't seem to have stopped people from accomplishing it.

With the right kind of abrasive and a suitable amount of patience, pretty much anything can be ground down, given time. Whether your safe seems interesting enough to warrant that amount of patience and dedication is another matter, of course, but it would be possible to wear it away to make a hole and allow the contents to be inspected. How long it would take to make a hole would depend on the safe itself. Highly secure modern safes may be effectively impenetrable in a reasonable length of time, certainly enough to discourage most people from trying to open it, but more average quality safes could be broken into with enough hours and days of effort.

A safe does not stop an attacker; it slows them down long enough for humans to stop them, or deters them from attempting it in the first place.

Given enough time and motivation, the natives could break into the pictured safe. Melting or dropping would be the fastest methods, but that assumes they know the contents won't be damaged by those methods, e.g. precious metals or gems. There are stone tools and abrasives that could eventually break in without damaging fragile contents, e.g. papers, but it would take long enough they presumably wouldn't bother. In an extreme case, they could just leave the safe exposed to the elements and wait until it rusts open.

And possibly not even then. The safe is designed to resist the most obvious brute force attacks like a crowbar, and any crowbar they might come up with would break before the safe does.

Not the answer you're looking for? Browse other questions tagged reality-check history or ask your own question.

6
How would a human society in the Age of Sail be affected by the existence of a portal network?
9
Could a Dinosaur make tools with only three fingers?
20
Reality check: Buddhist Aztecs
5
Could a pre-modern civilization make a gas canister with rough valves and pressure regulation?
9
Reality Check: Controling time to produce velocity