Feasibility of the coral highlands

In the game Monster Hunter World, there is a place called the coral highlands. The coral highlands is one of the most spectacular things to look at in the game, having a resemblance to a ocean without the salty water, or any massive bodies of water at all except ponds and rivers.

The coral highlands are filled with massive corals, anemone-like trees and grass; the life forms there have some traits akin to real world sea creatures, like little glowing, floating creatures that look and act like little jellyfish, creatures known as wrigglers which act like little fish in the ocean and are known to dig communal holes, and many many more.

The environment itself does have a lot of ledges and tall hedges and many strong winds.

This, however, got me thinking:

Edit: In the game there is also a location called the rotten vale which is located right under the coral highlands. It is littered with dead bodies and rotting corpses, and it is said that it nourishes the coral highlands itself. I wanted to include this because it might help with feasibility.

The reason there are so many sedentary (non-mobile) sea animals, including corals, sponges, barnacles and anemones, but no sedentary land animals (apart from parasites), is because water can carry a lot more biomass in it to feed them. Water is filled with plankton, tiny fish and jellies, and floating bits of dead plants and animals, so a sea creature can survive by letting food filter through its body. On land, there simply isn't enough food flying around to make this lifestyle worthwhile, so the only sedentary land organisms are plants that live off of the sun.

Organisms don't need to evolve to float in water - most organisms are made of mostly water, so they float by default. But to float in air, an organism needs to evolve specifically to do so - and the benefits of unpowered flight aren't significant enough to warrant this happening on a regular basis.

To make true "land coral" viable, you're going to have to find a way of putting a lot of biomass into the air. One possibility are these little floating "air jellyfish" you mention - perhaps they are the largest of their kind, and there are many other lighter-than-air, minuscule creatures floating around. If there are large amounts of tiny, lighter-than-air floating creatures, they might be able to sustain a forest of coral.

The real question is, why do these air jellyfish exist? The only thing I can think of is that some of them are actually plants, and they ride the air currents up into the upper atmosphere to gather more sunlight.

Instead of trying to "drain the ocean" to get the Coral Highlands, why don't we just have it evolve analogously to a water biome, but be based on more "normal" land creatures. It may be called "coral" but what if it just looks like coral? The tiny critters (polyps) that live in the structures could be crepuscular or otherwise spend most of their time hiding in their constructed shells. Maybe they're tiny little crab-like creatures instead of squishy polyps, something a little more conducive to land life. 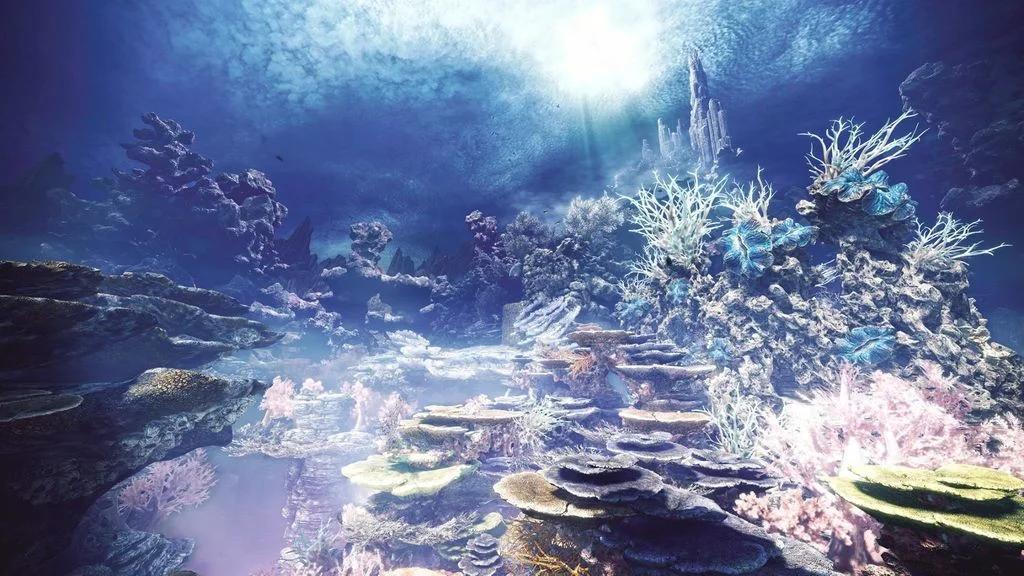 Coral shells are made of calcium carbonate (limestone). Bones are comprised in large part of calcium. I think we can work out a way for the bones in the valley below to feed coral "reef" building up high. We just need a creature to break down the bones and excrete the calcium somewhere for the polyps to consume. I don't remember the creatures of the Rotten Vale very well but I know there are several very nasty ones that could believably feed on bones and produce the calcium as a waste product. Maybe they want the collagen or marrow instead, which is extremely nutritious. 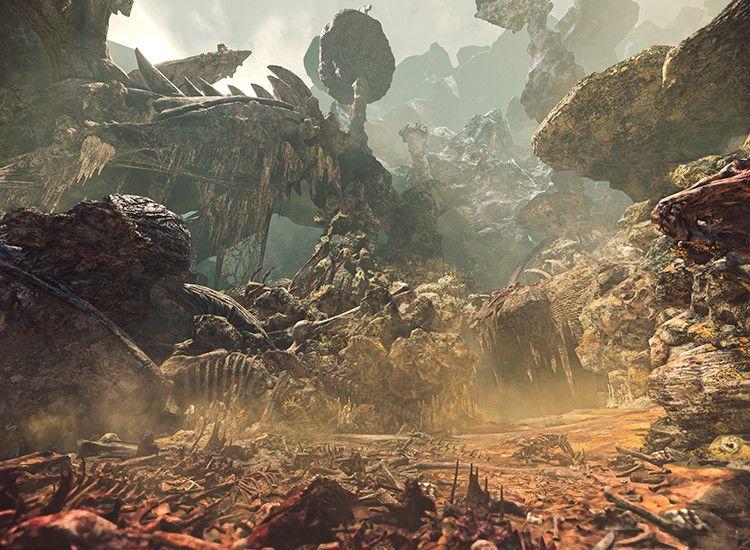 So we've got the coral formation generally covered. Now let's look at some of the other critters.

@IndigoFenix mentioned the jellyfish being more like floating plants. In effect that's not far from what jellyfish actually are if you look at function alone. They kind of hang around waiting for their environment to just give them nutrients. There are plenty of questions/answers out there about floating plants, like this one.

The trees that look like anemones are easy enough, they don't need a reason to have evolved that way, as long as they still function more-or-less like trees we're used to. Maybe they could be predatory too, like an anemone. Think of a giant pitcher plant or other predatory vegetation.

The wrigglers might be a little tricky because nothing can really move through dirt like water. Even moles, some of the best diggers, can only go at a max of 15 feet per hour. I don't really have a good solution here. The dirt could be very loosely packed, but that creates problems for other critters trying to walk on it. Maybe the wrigglers could stick to areas of very boggy terrain that would be easier to dig through.

In conclusion, while it may not have evolved literally from the ocean, we can still come up with pretty good analogues using land-based creatures. Could evolution have directed this? It's possible. Could it have been directed in a laboratory setting? That would be a huge lab, but I don't see why not.

Edit: Final note, having the Rotting Vale feed the Coral Highlands isn't a big stretch. You just need a vector to transport the nutrients from one place to another. With the wealth of creatures around and the ability to create your own, it shouldn't be difficult to designate some things as scavengers that transport materials as they search.

I believe this is possible, but the rotten vale has to have a LOT of rotting going on, since we're going to need a lot of methane.

The region's plants have established a symbiotic relationship with methane-consuming bacteria that grows into hybrid frond-leaves. The sort of bacteria I'm talking about mostly live under the ocean. The coral structure comes from a the carbonate byproducts of the bacteria.

The adaptation could have evolved from a direct evolutionary need for wind-resistant leaves. Normally, windy circumstances result in very small leaves, very flexible leaves, or no leaves at all. But, a plant which could have methane polyps attached would be able to grow a hybrid leaf mixed in with colonies of these methane-consuming bacteria. This enables retracting and extending the leaf (to protect from wind and/or conserve moisture,) and thus the tree would be able to have much larger leaves and gather more energy within a given space despite the wind. The methane bacteria aren't really producing any extra energy for the tree normally, and they sometimes require some energy from the tree if the methane isn't concentrated enough, but overall they carry their weight in terms of energy. The adaptation has proved useful enough that almost every plant in the region has created some sort of symbiosis with methane bacteria and exhibits some sort of anemone-like retracting action.

On to the animals!!!

The jellyfish things are the mature, breeding stage of development of a common small creature in the area. As the creature approaches maturity, it gathers methane-rich substances and then forms a colony. The colony then converts the methane back to a gaseous state and drops weight until it can float around looking for new locations to spread. Sizes of colonies vary, as the more methane-rich environments can support much smaller breeding colonies.

Wrigglers are the juvenile state of the jellyfish things. The holes they dig are to try and find methane-rich deposits on the roots of various plants for use later in colony formation. They don't eat the roots, so this is mostly beneficial to the plants.