Could some natural process on a moon do enough stationkeeping to sustain an impossible orbit?

I have several stories where I've wanted a moon in some weird orbit that is not allowed by orbital mechanics. In the past, I've had to change stories to bow to physics.

Today, I had a thought while looking at photos of Saturn's moon Enceladus. As it orbits, Enceladus gets compressed by Saturn. The compression squeezes out jets of water that rain down on Saturn, refreshing the rings. See image below taken by Cassini. Pretty neat.

I started thinking, "What if those jets were like rockets, pushing the moon?" I know that's not viable: the amount of water coming out of Enceladus is tiny compared to Enceladus' mass, so this example isn't going to cause any meaningful shifts to the orbit, so far as I know. And any ejection that was sufficient to skew orbit wouldn't be particularly repeatable (the moon would run out of mass pretty quick).

But physical propellant isn't the only way to do stationkeeping. Could there be some sort of natural event on the moon (for example, a naturally occurring nuclear explosion), something that happened with some regular cadence, of sufficient strength to push a moon on its orbit? Can we construct a moon that has natural stationkeeping such that its orbit is one that would normally crash or fly off, but because it gets a regular bump from some other force, it is able to maintain its orbit?

Whatever gets proposed is likely improbable, but I'm looking for possible.

Summary: Is there a natural, repeatable process that could somehow become sync'd with a moon's orbit that would provide stationkeeping ability to sustain the moon in an otherwise impossible orbit? 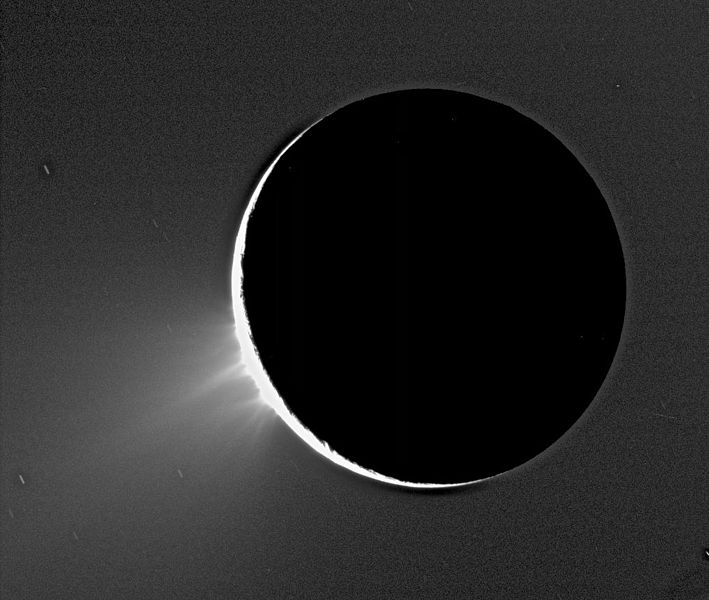 No not to any significant extent. The forces required to drive even a small moon like Enceladus would be too large. And even if such a massive force were available it would need to be applied continuously for station keeping beyond the moons natural orbit. As soon as the force was no longer applied the moon would simply continue in its new orbit only affected by gravity.

In a similar way a rocket can change its orbit by firing its engine but as soon as the rocket’s engine is turned off the rocket will revert to an orbit purely dictated by gravity. An impossible rocket with a portal on board capable of supplying endless amounts of propellant could continually overwhelm gravity and could for instance move around a planet faster or slower than would be predicted by a classical orbit but any such portals are beyond physics as we know it.

One could postulate the recent capture of a Kuiper Belt object that got turned into a long period comet, maybe a capture via recent collision with a previously resident moon. With a large reservoir of ice and new exposure to sunlight one might get enough assymetric jetting to alter the object's trajectory significantly from purely orbital motion. This gets easiest to envision near the planet's Lagrange points where it takes very little delta V to produce relatively large motion changes. One could envision the impact site with the resident smaller moon leaving a large crater and throwing out a debris blanket on one side of the KBO to set up the asymmetric jetting conditions. This is very unlikely of course, but within the bounds of the possible over the time span of interest.

Yes, sort of. Two small moons of Saturn, Epimethus and Janus, swap orbits every four years (Earth years, not Saturn years). Neither moon could have the orbital path that it has if the other moon were not there. So the “natural process” you’re looking for is simply the existence of another moon.

From your question I can assume this isn't already a normal system.

As such, if a moon had been part of multiple bodies instead of just one (or the other bodies came in at a later time), these other bodies could impact with the moon (or have impacted) to keep it out of alignment.

So, for example, Moon A is the moon that's currently orbiting our main body. Let's assume it was originally orbiting in a semi-normal fashion around its parent.

Along comes object B. This body zips around the parent and goes past the Roche limit, fragmenting into a series of smaller objects which continuously slam into Moon A pushing it against it's normal gravitational pull and keeping it at an 'extreme' orbit.

This obviously would not be something that would last forever, but there could still feasibly be remnants of object B due to impact into A for quite a period of time.

Not the answer you're looking for? Browse other questions tagged science-based moons orbital-mechanics or ask your own question.

3
Moving people from a dying planet onto the moons of a gas giant
0
In The Event One Wants a Gas Titan in His Worldbuilding Story
15
How would a moon in geostationary orbit appear to wax and wane?
2
Is this habitable moon possible?
3
How do I explain the formation of my world scientifically?
12
Can the Sun lose enough mass that Saturn's current velocity becomes escape velocity?
0
What would the moon look like if its orbit was highly inclined?
4
Is there a plausible way to have a Gas Giant with two or more earth to mars sized moons orbiting it in the Habitable zone?