How can I get a total solar eclipse to be a yearly event?

In our world, a solar eclipse is visible from the planet a few times a year, in certain locations. However, a total solar eclipse that can be seen across the planet generally happens every three or four centuries. I am building a world similar to Earth. What I need is for a total eclipse to happen once every year, at the six month mark. The problem here is two fold. The moon rotates and revolves around the planet at a certain speed and distance. To accomplish my needs, I figure that I would need to speed up one of these processes, or introduce some other new change to our orbit. The problem is that the moon has certain gravitational effects on our planet that may change due to any alterations that I would make.

What would be the ramifications of altering our relationship with the moon in this way? How would I be able to create the effects that I desire without significantly damaging the planet as it is now?

In order to have an eclipse visible from everywhere on your planet, you need to make your planet be the moon. The planet needs to be much larger than the moon in order to cast a shadow big enough to cover the entire surface of its moon. If your people live on the moon instead of on the planet, then you can have a total solar eclipse. After that, you just need to position it, per some of the other answers.

I have a different solution, which does not require massive adjustments in planet, star or moon masses (meaning tides and the length of the year and such can be the same). Rather than perfectly align the Moon's orbital plane with the solar system's, align it at a 90 degree angle:

Then, make the Moon's orbital plane stationary, or rotate once every twelve months, depending on your perspective: 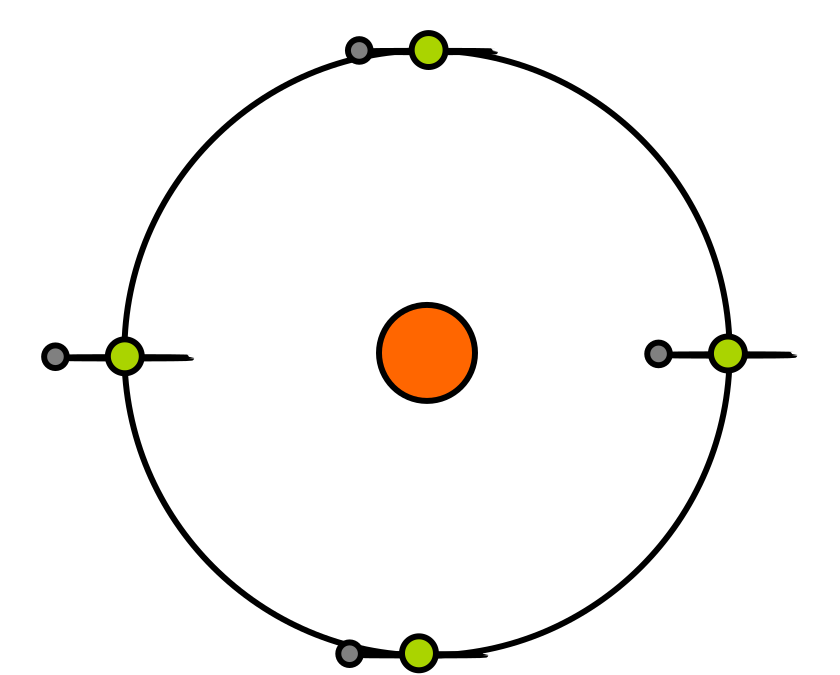 That way, eclipses can only happen twice a year, when the Sun is aligned with the Moon's orbital plane. And if you make that orbital plane rotate at half the rate (once every 24 months), you could make the intersection happen only once a year: 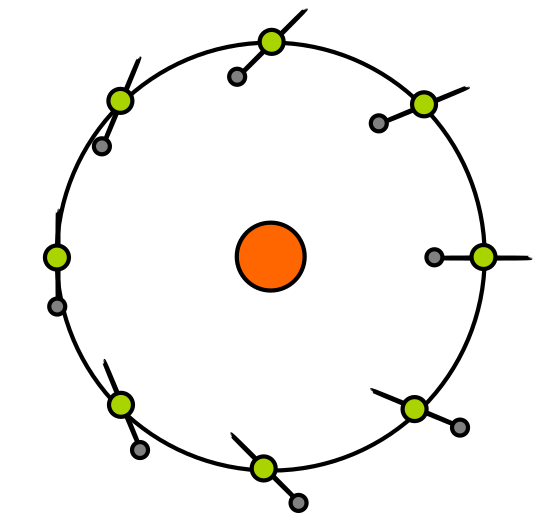 I can't tell whether such an arrangement would be stable in the long run. I don't even know the correct astronomical term for the rotation of an orbital plane. Such an eccentric orbit however suggests a captured extrasolar asteroid, which do not commonly have stable orbits to begin with, so you should be able to get away with doing that for the duration of your setting - unless your story takes places over multiple millions of years.

The simplest way to achieve this is to have the Moon be on a perfectly circular orbit that lasts twelve months and lies in Earth's orbital plane; this would mean that at each new moon, we would get a solar eclipse. Let's say we keep Earth and the Moon at the same masses. We'd then need the Moon to orbit about six times as far away as it currently does, by Kepler's third law. However, then the Moon would be too small to produce a total eclipse - and the Moon would likely lie outside Earth's Hill sphere! There are two solutions:

I suspect that the final solution is preferable, as the first two would result in substantially lower tidal forces (which scale as an inverse cube law) unless we drastically increased the mass of the Moon to an unrealistic value; additionally, the Moon would likely lie outside Earth's Hill sphere, quickly making its orbit unstable. Therefore, if we want to Moon to remain in its current orbit and still have an orbital period of twelve months. However, Kepler's third law tells us that this would require Earth to have mass of roughly 0.5% of its current mass.

I suspect the best solution is a compromise between the three: Make the Earth slightly lighter while moving the Moon further away, increasing its size and making the Sun smaller and hotter. Its possible that this would result in a binary planet-like arrangement.

I'm not an astrophysicist or anything, so input from those with more knowledge on the subject is welcome, but I think if you started with a hotter, much more dense sun and put your planet's orbit further away to maintain the Earth-like atmosphere, the sun would be both objectively (in absolute measurements) and subjectively (as perceived from the planet) smaller, so there'd be less to eclipse. For good measure, nudged the moon a bit closer to the planet, and planetwide total eclipses should be possible. The trick is to maintain the balance of heat and mass of the sun relative to the planet's distance and orbital speed, so it maintains a stable orbit and doesn't spiral into the sun or reach escape velocity.

This may affect the length of the year (and/or day), but you can always fudge your calendar as you'd like, since they're arbitrary human measurements anyways. If the moon's orbit is synced with the planet's orbit around the sun, so the moon crosses between the planet and sun at exactly the same time every year, you'll have a once-a-year total eclipse. You could have your moon on a slightly off-plane orbit, and you might get one or three partial eclipses a year as it partially obscures the sun, then that one time of the year where it's in-plane with the sun and planet, causing your total eclipse.

Space.com has a great write-up on how eclipses occur -- even though the sun is larger than the moon, it's also much further away. Right now, the sun is about 400x away from us as the moon, and is about 400x larger than the moon, so we only get the eclipses when everything lines up just right. If the sun were further away or smaller, or the moon were larger or closer, or any combination of the above, planetwide eclipses could be entirely possible. You just have to mind the other astrophysical mechanics (mass, density, gravity, velocity, and so on) to make sure you don't have one of your celestial bodies spiraling toward or away from the other.

Fun fact: our moon is actually moving further away from the Earth by about 1.6 inches a year. In several thousand years, total solar eclipses might not be a thing any more!

As long as the moon - and therefore its shadow - is smaller than the planet, an eclipse is visible only from a small path.

The six month mark would be the summer solstice, this implies a tilt of the planetary axis to have a well defined new year date: the winter solstice.

When the plane of the moons orbit is tilted against the planets orbital plane around the sun, eclipses happen only twice a year, when these planes intersect. Otherwise you get an eclipse each month.

The exclipse happens only at a new moon, so to have a fixed date each year the length of a month must be an integer fraction of a year, combined with the tilt of the planes you need an odd fraction to avoid an eclipse at winter solstice also.

Sorry, this means your year has eleven or thirteen months, the winter solstice as start of the year coincides with a full moon. Exactly half a year later, the summer solstice coincides with a new moon and a solar eclipse somewhere on the planet: if all is perfectly aligned, this location is along the tropic where the sun is at the zenith during the summer solstice. If the length of day is also an integer fraction of the year, this location is fixed not only in latitude, but also in longitude.

Remember, for the shadow of the moon to cover the whole planet, the moon needs a larger diameter (and a very low density, to remain the lighter partner) than the planet!

To explain the integer fractions and keep them stable during the age of your civilisation is left as an exercise for the worldbuilder.

Not the answer you're looking for? Browse other questions tagged planets moons or ask your own question.

12
A world with a moon orbiting much closer than ours
5
Could a solar eclipse occur just after a lunar eclipse?
3
Binary planet eclipses
10
Effects of regular prolonged eclipses on environment
8
How can I lengthen a total solar eclipse on an earth-like planet?
2
Solar Eclipses on Planet Tidally Locked with Its Moon
11
How long would this eclipse last?
7
Realistic ways a Planet or Large Moon could have Variable Day/Night periods
3
How can solar eclipse magnify the moons effects?
4
How would eclipses change (both solar and lunar) if the moon was half the distance from the Earth?