A bullet that makes the target explode

Currently, my only idea is a bullet that meets such a requirement is a heat bullet: when shot at a target with water (organic life forms), the heat stored in the bullet is rapidly spread to the target and creates a steam explosion.

The method of production and storage how the "make-them-explode" stuff in the bullet does not matter. I just want the bullet to make stuff blow up, one way or another, using the stuff naturally inside the target as the "explosives". The more materials it can blow up (instead of just organic, may be even metals) the better.

The bullet may act as something like a trigger or catalyst for the explosion, but the main material/fuel of the explosion should be the target.

(I'd like something as realistic as possible. Going sci-fi is fine but I'd rather not just throw "quantum" around as an excuse. Even answers blackhole or antimatter would be valid types if they meet the requirements)

Backyard Scientist filled bullets with sodium potassium alloy, and those things blew up a watermelon very well. Fire and everything. 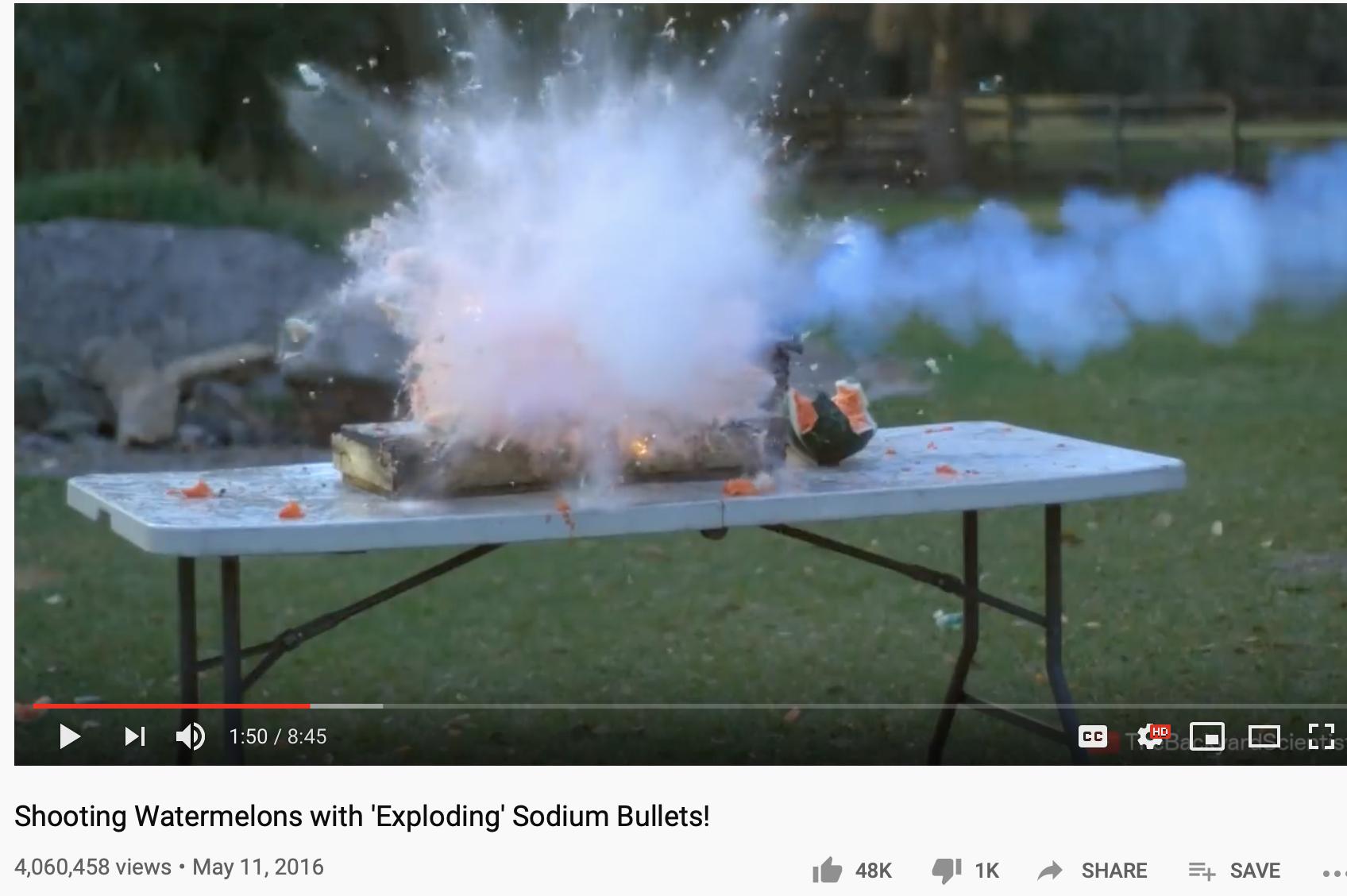 That smoke trail was left by the bullet in the air. Cool stuff! I suspect these NaK bullet would only blow up things that were soft and wet. Water is what makes NaK explode, and these bullets had barely any penetrating power - they are soft and light. Hopefully you are interested in blowing up watermelons and other large fruits. Durian, maybe.

Energetic nuclear reactions, such as fission (of fissile materials) or fusion (of light elements) or annihilation (of anything) doesn't cause much of an explosion by itself, because there's simply not enough "stuff". In the extreme, complete annihation of matter can't be an explosion at all... just a very bright, very brief gamma-ray source.

Instead, what happens is that the intense x-ray or gamma radiation, combined with energetic fast particles such as neutrons, alpha particles and heavy fission fragments, are eventually absorbed by regular matter around them which heats up very rapidly and expands violently, forming the actual explosion. The characteristic fireball of a nuclear explosion is superheated and partially ionised air and dust, for the most part.

If your bullet contains a suitable confinement mechanism for a microgram of antimatter, the total useful amount of energy released is about 90MJ, of which about 60MJ is released in the form of highly penetrating 200MeV gamma rays. Given the stuff humans are made of, they have a mass attenuation coefficient of about 0.01-0.02cm2/g against photons of that wavelength, which means that over a 10cm distance only 18% of the energy will be absorbed.

Now, what follows is only slightly better than a wild guess... bulk gamma ray absorbtion is hard to calculate (because integration over a sphere-intersecting-with-a-human is awkward and because meat plasma is less absorbing than meat), but here goes anyway. I'll work it out for the most penetrating gamma rays, meaning that the actual amount of absorption will be higher which should make up for ignoring the plasma phase transition.

Anyway. If you shoot someone right in the middle of their torso, and the bullet detonated half way through, a sphere of meat 10cm in radius will absorb at least 16MJ of energy, giving an energy density of about 390MJ/kg, about a hundred times more than the equivalent mass of TNT, so it'll definately expand energetically as it turns to superheated and partially ionised vapour, aka a nuclear fireball. The yield over that small spherical volume is equivalent to about 4kg of TNT. In reality of course the explosion could be more energetic... a lot more energy will be absorbed from gamma rays travelling up and down the long axis of the body, and yet more will be absorbed by the target's clothing and equipment and immediate surroundings. Note that anything nearby that survived the blast will receive a nasty dose of radiation... I'm not going to calculate how nasty (because it is hard) but it will certainly be bad news.

Here's a video of 8kg TNT equivalent of high explosive. It probably won't be dissimilar to the effect of the antimatter bullet... if anything, the bullet I've look at would be much more destructive (max equivalent yield perhaps 21.5kg TNT) but this should give you a good idea of how things will go. 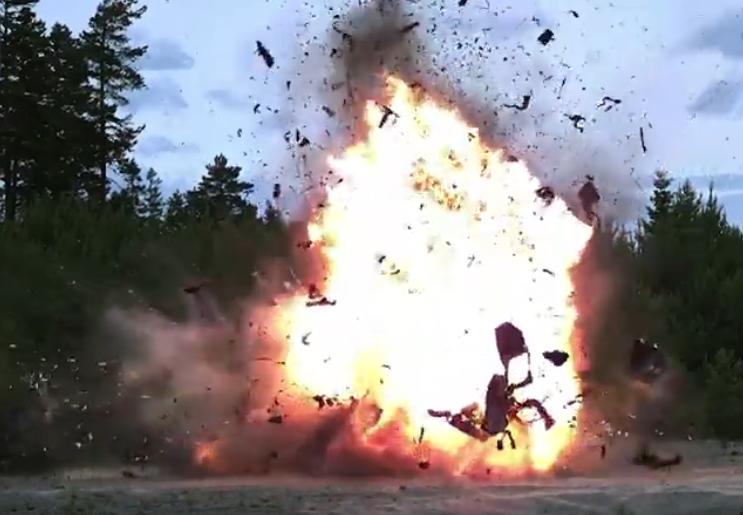 The explosive was detonated inside a vehicle the size of a large family car or small van, to give you some idea of scale. The dark square object in the bottom right of the fireball was one of the doors. I suspect the actual fireball would start out brighter (perhaps blindingly white, then bright yellow-white) and then be less orange afterwards, given the elemental composition of meat, but I couldn't say for sure.

If you do make antimatter bullets, it would be inadvisable use them at close range.

You want your (biological) target to explode, as opposed to the bullet exploding inside the target and that explosion causing the target to fragment.

One possible way of doing this is by applying an electric current to your target in such a way that the water in their body spontaneously separates into hydrogen and oxygen and once there is very little water left the gasses combust into a large and fiery explosion.

Although this bullet might be bigger than a dump truck for all the handwavium it is going to have to contain, I think it makes up for it in cool factor. ;P

Micro black holes as bullets? Or just very very tightly compressed mass, that would be released on impact.

These are still bullets that explode, but if they cease to exist the moment they release they energy... doesn't it effectively make the target explode?

What is your definition of "explode"?

For instance, JFK's head exploded, parts flying up to 20 feet into the air, as shown in the Zapruder film:

That was with a simple 6.5mm full metal jacket bullet (almost impossible) according to the official report, or a 5.56mm frangible bullet (much more likely) according to other theories. Frangible bullets are designed to fragment upon impact and cause maximum damage. Actual explosive charges etc. really aren't required.

A bullet containing an enzyme triggering spontaneous human combustion would do nicely. Obviously SHC is dubious anyway but this is SF

Not the answer you're looking for? Browse other questions tagged science-based science-fiction .

13
How fast does an antimatter bullet need to move to pierce rather than explode?

6
Realistically calculating the movements of someone with super strength
15
Quantum containment for nuclear explosive bullets
44
What's the largest body in the solar system that you could destroy without endangering humanity?
7
Is my plasma weapon design any good?
1
Hidden specks will blow up the world if overheated: how bad a thing is this?
4
Can a crystal grow or propagate faster than 'c'?