This question is based off videos of octopi running using their tentacles curled under and their body raised from the ground. https://www.youtube.com/watch?v=23qzi88k3aM

I saw this question Anatomy of a walking octopoid but it is the specific running motion strong enough to lift the body up that I am after.

I was wondering, for a design of a tentacled land alien what muscular anatomy would be needed to achieve something similar?

The main body or head of the creature would be of a similar size to an octopus or smaller so there isn't to much weight to lift up, I was thinking an elephants trunk is pretty strong and accurate with its movement so something similar may work? would they need some strange gluteus/lower abdominal type muscle also?

So my question is what anatomy would this running land octopoid need?

The locomotory tentacles - two, or three for stability, or four to leverage lateral symmetry - would of course need two or three strong antigravitational muscle fascias to keep the body off the ground and have it "fall" forward. They couldn't apply leverage to a bone or exoskeleton like vertebrate and arthropods do, but they would almost surely evolve a hardened surface (essentially a segment of exoskeleton) to improve grip on the ground; the muscles would then naturally bind to that. To improve flexibility they would have two or three hardened, corny "shoes" on the lower part of each tentacle, joined by flexible tendons.

The gait would be either the awkward movement of clowns with too-long shoes, or more likely they would swipe the legs laterally (two other sets of muscles are required), keeping the tentacle tips bent inwards to reduce the footprint.

The body would fall forward as humans' do, then the hindmost tentacle would swipe to the outside (or to the inside?), sliding forward with minimum elevation, and land on the ground to the front, taking the weight. Having only one section of tentacle as "shoe" would give a wobbly gait like walking on stilts. Having two would achieve a smoother gait, as weight shifts from the back to the front of the same tentacle "shoes".

With two tentacles for motion and two others for stabilization, your alien would be able to run quite fast, sort of a low-altitude flight. In closed environments it could be able to navigate sharp bends at speed way better than a human could, using the other tentacles to pull and push against walls and other support structures.

(a different gait with two slow "treads" under the tentacles of the alien gukuy is presented in Eric Flint's Mother of Demons - the cover image does not match the description).

Having seen several questions like this boiled down to "they cant without bones" you'd have to find some kind of intermediary solution.

Example: you split the tentacles in a normal variant and a walking variant. The walking variant holds a spinal structure similar to a snake body, which we know can carry a lot of weight and exert a lot of strength for at least short periods of time. These walking variants would be less flexible but have strong placements for muscle attachment and the bone to carry a lot of the weight. The more ridgid you make the tentacles the easier and longer you can walk, up until you basically have an upper and lower leg.

Edit: As a sure-fire option you could use what amounts to miniature legs. In the video you see the octopus walk on two tentacles, but they bend the tentacles so the tentacle is actually standing at it's halfway point. Two tentacles will get a femur, patella, tibia and fibula (upper leg, kneepad and the two lower leg bones) that take up the top half of the tentacle and are naturally connected to a hip-like structure in the main body. The lower half of the tentacle acts as a foot that seeks purchase on the ground, can offer stability and push off when necessary. We know with 100% certainty that this would be able to support the weight for extended periods of time as most creatures do this.

The drawback is again that these two tentacles would sacrifice a lot of their maneuverability in the top half of the tentacle but it would guarantee the octopus the strength and stability (especially with help of the other arms) to walk around on land.

You could simulate a skeleton using shell. 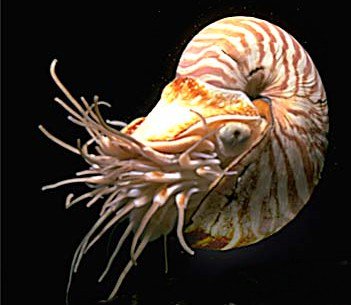 Cephalopods are molluscans and mollusks have shells. Of extant cephalopods the nautili have excellent shells; depicted. Now imagine shellstuff which extends down each tentacle. The stick of shell transmits weight from the body shell down to the ground, and the stick is moved by the associated tentacle, which acts as muscles do for us. Shell material would bear the weight and be moved by the muscular tentacles.

You could also have the shell simulate a endoskeleton and fortify the tentacles from the inside. The pen of a squid is a structure like this - the molluscan shell, acting as an endoskeleton.

Long ago (a decade, probably two, so no references) I saw a show on discovery channel theorizing about how animals on other planets might look. One example they came upon, was actually land animals evolved from squids.

Their solution for walking without a skeleton, was a series of ring like muscles around the leg, that would create a rigid cylinder looking like an elephants leg/foot.

This structure would be able to create the necessary force to counter gravity and prevent the animal from collapsing under it's own weight.

(an example would be how your tongue is able to extend, even though it has no bones in it)

13
Could humanoids without a skeleton be viable?
10
Anatomy of a walking octopoid
2
Segmented Endoskeleton
5
Could a creature discard its skeletal system to function like an octopus?
4
Evolution of ossicones like structures to tentacle or trunk like limbs
1
I am making a creature with sloth like claws and need to know how it would be used for climbing trees and walking
7
How long and heavy can a tentacle tail get relative to the animal it's on?
6
Leg anatomy of Arachnotetrapod
3
Could papillae or another muscular protrusion act like tube feet on a land-dwelling creature?
4
Would tentacle like appendages along limbs aid in daily life activities?