Is it inevitable for tiny humans to have very high pitched voices?

Let's say there's a humanoid species that are essencialy humans but tiny, around 13cm tall. As their vocal chords are smaller they would have high pitched voices, but could that effect be minimized in a biologically possible way? 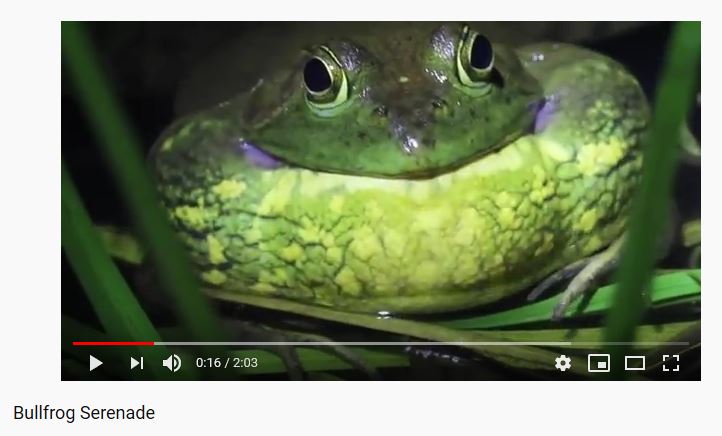 Bullfrogs win mates with their low pitched masculine calls. This guy is likely less than 13 cm. I suspect (but do not know) that the trick is his resonant apparatus - that throat sac offers a larger surface than human vocal cords and consequently the ability to generate deep notes. Some frog sounds are considerably lower pitched than human voices.

Your small people could have large throat sacs that they inflate while singing the tenor and bass parts. It would be an intriguing look as well and one I am not sure I have run across.

These humanoids could possess a disproportionate throat region to accommodate longer vocal chords that vibrate at a lower frequency. They may have a sort of throat pouch like many animals that require the ability to make booming calls.

Is it possible for them to have a voice that is as deep as regular humans? Probably not. 13cm is pretty small (the world's smallest living woman, Jyoti Amge, stands at 64cm). In theory, a 13cm human could have throat anatomy that accommodates longer vocal chords and disproportionately large lungs, but if these features were increasingly disproportionate it would start to interfere with other requirements of the body, but it could certainly be disproportionate enough to limit the squeakiness of their voices. I assume you only want their voices to be deep enough to not sound like chipmonks. You also have to ask why this would happen and that could be a feature of whatever story you are writing too.

Runaway sexual selection could, for example, end with one sex (for a mammal this would usually be the males but not universally) having disproportionately deep voices as an audible way to make themselves sound bigger and more dominant.

They could have syrinxes in addition to larynges. This would permit them a much greater vocal range, and hence disproportionately low voices for their sizes. (Their voices would still be higher than a full-sized, anatomically-correct human's, though.)

Not the answer you're looking for? Browse other questions tagged science-based biology creature-design anatomy humanoid or ask your own question.

6
How long would it take for another species to help primitive humans evolve?
13
Would a long-nosed species have a different voice tune?
7
Giant bug noises
4
Does this gular sac design work?
3
Can a humanoid with a wider mouth and different teeth structure talk like a human?
4
Would gestation for tiny humanoids take more or less time?
4
Can A Fast-Twitch-Muscled Humanoid Species Still Have Sentient Levels Of Intelligence?