Are the ocean currents and climate zones of my world plausible? 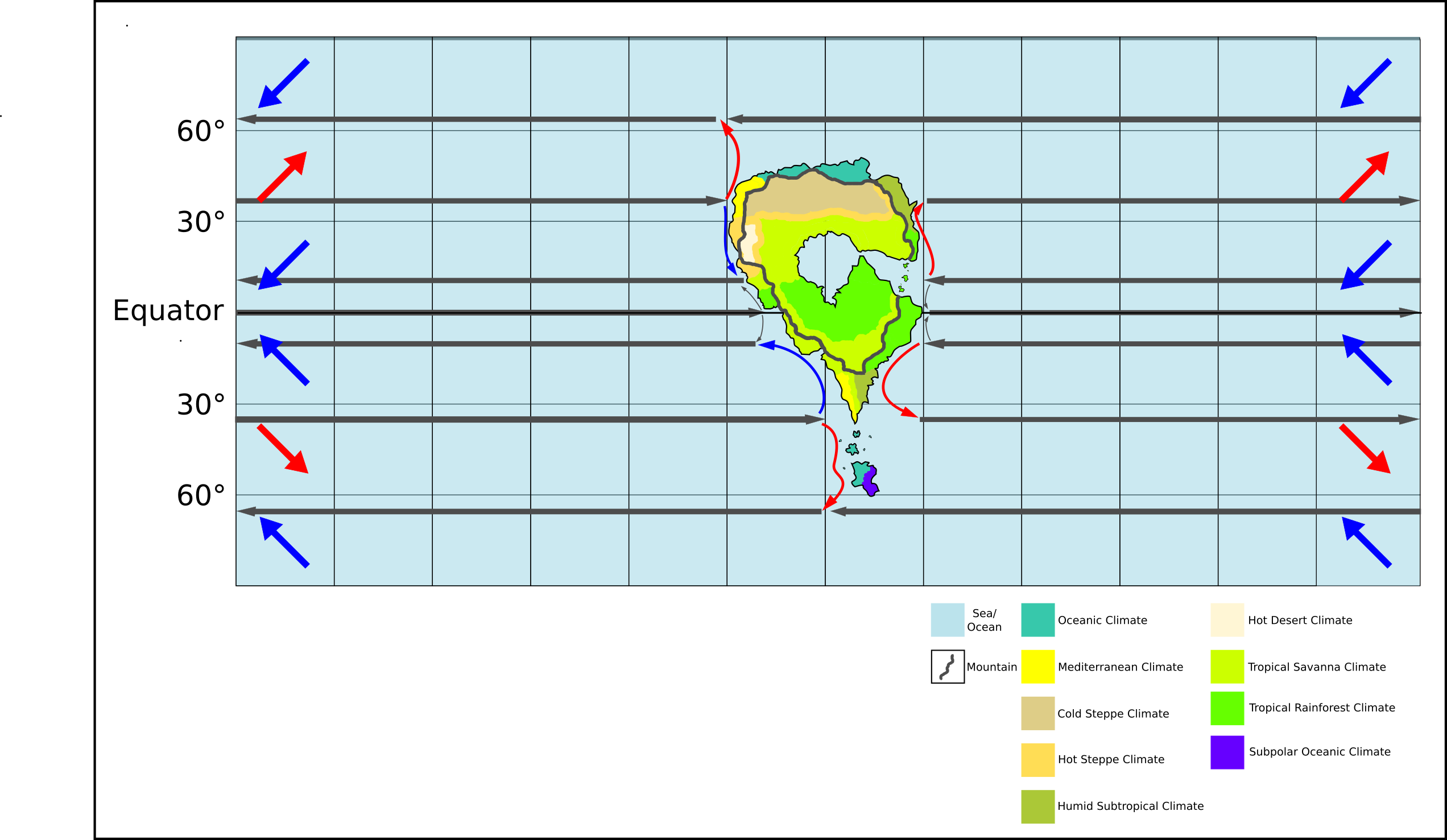 So, I'm making my first stab at worldbuilding, and I got this idea for a largely water world with only a single continental landmass, a little smaller than Africa in terms of land area, roughly centered on the equator. So I followed Artifexian's video guides and tried mapping out prevailing winds, ocean currents and climate zones for my continent, but I have to admit I'm not sure on all of these. Do they look plausible at all, or does something badly need to change?

To clarify, this is for a planet that's otherwise basically Earth. The mountains encircling most of the continent's interior are supposed to be pretty old, and thus not very tall, though I honestly haven't given them much thought. Basically, I'd be fine with any combination of elevations if it can help preserve my climate zones.

EDIT: Thanks for all the great answers and suggestions. I did an updated version based on all the advice. 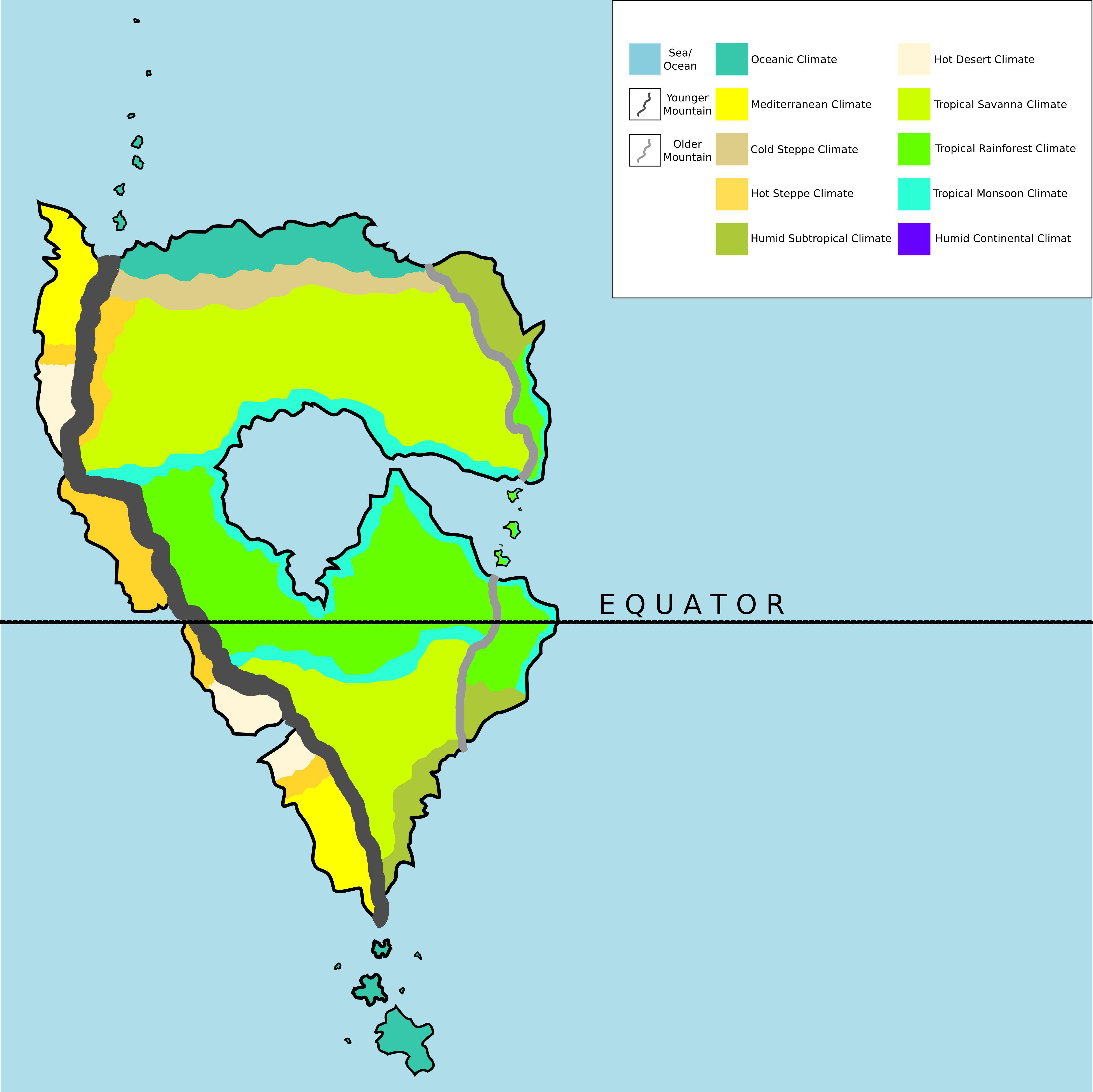 Any land near these is not going to get much in the way of precipitation, since the moisture will often stay in the air instead of condensing and falling as rain (even rain shadow is unlikely to draw much moisture out). If you want examples, compare the climates of Spain and France along their western coastlines (Spain is considerably drier, since the current passing by its coast is a colder one). The northwestern coast of Africa is also extremely dry for the same reason, despite being near the equator. Your likely climate zones along the western coast are steppes or deserts, or a savanna at best.

In the tropics, the prevailing winds are mostly east to west. They don't really start going eastward until around 35N/S. Since this is where a lot of your moisture is coming from for rainfall, the eastern side of your continent is going to be very wet. The mountains muddle the picture a bit, but you have a nice big hole to admit wet air through: your rainforests are going to be in that path. I can't predict with certainty how much rain you'll get off the inland sea, but given that it's somewhere near the size of the Mediterranean (the small-scale image does not suggest it, I have to admit) there's going to be quite a bit.

Air currents inland are tricky for me to estimate with that inland sea; I might well be wrong, but I suspect that a lot of the rain will get pushed northward (the eastern gap being ultimately in the northern hemisphere). 30N/S tends to be a dry line, relatively speaking, but 30N is probably going to be more savanna than steppe. The steppes and desert you've got up there were on the right track, but based on my prediction, they should end up south of the sea instead, where the mountains cut off the prevailing winds.

This is a big problem, because that circle is rather unrealistic (as cool as it might be to think about). Mountain ranges come from plates crashing together (volcanoes can produce single mountains, but an inland volcanic range is a very dubious prospect), and plates tend to move in a single direction. Mountain ranges, accordingly, usually form in relatively straight lines; you don't get a sudden sharp turn like what happens in several points of your ring (south, west, northwest, and northeast) without introducing additional plates. However, if you get convergent boundaries on one side of your continental plate (which are what make mountains), you're going to need divergent boundaries elsewhere, since the continental plate is also moving and can't be crashing into everything at once. You can get away with a second range by calling it a remnant from a previous plate collision wherein the plates merged (North America's Rocky Mountains are such an instance: there's two distinct mountain ranges on the western coast), but your mountains can't be from any less than four separate ranges as they stand, possibly even five.

For modifying your map to a more realistic picture, I would recommend removing the northern mountains at a minimum; this will minimize the effects on climates. The northwestern part (above that corner at 10N) could be kept if you extend the land outward a little above that point to create a more continuous appearance: you could also remove those mountains, but that would probably impact your northern climates. The southeastern range can be kept, although you're going to have to cut some mountains between that and the southwestern range, basically poking a hole in the ring at that corner; note that this won't necessarily admit much in the way of wind unless you make the hole facing the east, so point it southwest or south and you won't have to alter the nearby climates very much. The northeast is questionable, but the continuity with the southeast makes it plausible to some extent; you're going to need to lose anything above 30N on that side, but you can get away with the rest.

All things considered, this is an excellent map for a first attempt. True, it's not perfect, but climates are very hard to predict on a fictional map, and there's a lot of room for error when we have a grand total of one example (Earth) to work from. As far as plausibility goes, this is pretty close to the mark.

If you want more details or to refine your map further, you can try the process I've come up with for yourself; although very educational, I will warn you now that doing it in full (obtaining actual numbers, instead of forming rough predictions) is quite time-consuming. I summarize it in this answer, or for the full story you can go directly to the guide it refers to here, which includes links to the sources I used as the foundation for writing my own guide.

Generally I like the map and it is really good for a first try. However there are some oddeties and I have so e suggestions for fixing them.

I think that there should be rainshadows in the south and north-east inside the mountain ring. The inland sea will probably prevent them in the west. However on the western side of the mountains there will be rainshadows as well. Together with the cold ocean currents, this will crate coastal deserts. You should check out a climate map of Peru, since your situation is similar on the west coast.

There should be some vulcanic islands in the ocean. Think Hawaii, Galapagos or Iceland. These island chains are crated by upwelling pumes in the mantle. This would make your world more realistic.

Maybe the inland sea is big enough to have a clockwards ocean gyre. If if you look at pictures of currents in the great lakes, the caspian sea or the Mediterranean you will see what I mean. I suspect that it's effects on the climate would be relatively minor.

How did this continent with such an odd mountain range form? I can't really imagine a scenario where plate tectonics would create such a setup. Even if these mountain ranges are ancient and long dead like the Appalachians, their form and how uniformly wide they are is odd. I suggest that you restart this project with creating a plate tectonics map of your world. Artifaxian has a few videos about this.

My suggestion would be to keep the western mountain range and explain it as an oceanic-continental subduction bounderary range. This is what happens on the west coast of South America. The ranges on the eastern peninsulae could be lower mountain ranges that formed when the easternmost part of the continent, once a smaller continent, collided and connected with the larger, western continent. If these mountains are older, they could be lower with less substantial rain shadows. The northern range cold either be dropped, as it would break up the ring shape without really effecting the climate or be explained like the western range. If you do the latter, the oceanic-oveanic convergent boundary in the northwest should create an island arc leading away from the continent. Think the Philippines.

The inland sea could be explained by the continent breaking up. It could be similar to the East-African-Riftvally, but flooded. As new crust would be generated in there, an outwards leading arc of small vulcanic islands could be expected.

Not the answer you're looking for? Browse other questions tagged geography climate currents .

13
How do I figure out my planet's biomes and weather?
0
What rules govern which biomes can neighbor one another?