What would be the effect(s) of high-speed plasma impacting a planet?

As a follow-up to this question, what would be the effect(s) of a high-speed of super-heated plasma entering and impacting on a planet?

The planet is about the size of 1.2x Earth(s), with a similar atmosphere.

The plasma is the direct effect of the Earth getting "obliterated" by a large, fast asteroid impact.

What would be the effect of plasma entering the atmosphere on this planet? How much damage would it cause?

Also, would there be any long/short term effect(s) on the Flora and Fauna of the planet?

The Earth's atmosphere is hit by high-speed plasma continuously, in the form of the solar wind. The incoming plasma will be deflected by the Earth's magnetic field, and generally enters close to the north or south magnetic poles, forming aurora. Here's a nice picture of some:

Solar wind particles generally have kinetic energies of about 1keV per nucleon, which is about 500km/s, or about 0.0015c.

Occasionally though, you get blobs of plasma ejected from the Sun in the form of Coronal Mass Ejections which can travel a little bit faster. The flare that caused the Carrington Event of 1859 travelled at nearly 2500kms, still a bit shy of 1% of lightspeed.

Auroras were seen around the world, those in the northern hemisphere as far south as the Caribbean; those over the Rocky Mountains in the U.S. were so bright that the glow woke gold miners, who began preparing breakfast because they thought it was morning. People in the northeastern United States could read a newspaper by the aurora's light. The aurora was visible from the poles to low latitude areas such as south-central Mexico, Queensland, Cuba, Hawaii, southern Japan and China, and even at lower latitudes very close to the equator, such as in Colombia.

It might be possible to get CMEs which reach velocities of about 0.01c from the Sun. Our star is just too relaxed to generate a superflare, so bigger and brighter CMEs will only likely occur in other planetary systems with unfriendly suns whose local environments will be so hostile that planets around them might not even have atmospheres anymore, let alone any sort of complex surface life.

Sticking with more plausibly sized Solar CMEs... as the velocity of the incoming cloud of plasma increases, you'll get brighter and brighter aurora, visible closer and closer to the equator. Almost inevitably, XKCD has some useful information on the subject: 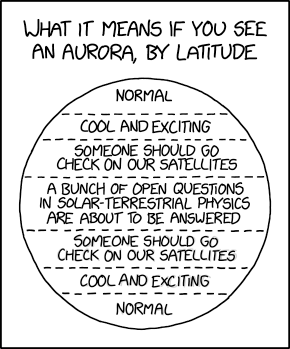 Note the scope of the plasma impact here: CMEs can be tens of millions of kilometres across, and require something the size of a sun to generate, and require the Earth to be relatively close to the sun. The blast expands and weakens rapidly. You won't be getting some giant superenergetic plasmoid trucking in from extrasolar space... by the time it got to us, it would be just too diffuse to do anything interesting. As mentioned elsewhere ad nauseam, plasma weapons are a silly idea.

this will cause disturbances in the Earth's magnetic field, It'll make it weak.

so lot of radiation from the space will reach us means mutations in ADN that means a lot of cancer, There'll be also an electricity issues, The electricity grid may go down for years.

We call this Coronal Mass Ejection

Not the answer you're looking for? Browse other questions tagged atmosphere earth energy asteroids or ask your own question.

11
What would be the effect(s) of this asteroid?

4
What type of celestial body could pierce an Earth like planet without loss of trajectory or minimal loss of speed?
3
What would weather be like if the entire water on the surface of Earth freezes?
16
What impact is required for a visible (from Earth) ejecta plume on Earth's Moon, and would the Moon survive?
1
Is it possible to divert a 1km Asteroid from Earth?
4
How much heat would a 1km asteroid release into earth's atmosphere?
5
What's the biggest, most spectacular asteroid collision the moon could save us from?
8
What would an asteroid impact feel like to someone standing on the moon?
11
What would be the effect(s) of this asteroid?