So in a related question, I asked about cannons vs ships made of treated (magically) hardened, and while answers weren't as helpful as I hoped, comments provided a direction in which I focused my research. My conclusion was, if I really want cannons to be able to damage my ships made of magically hardened wood, I'll need far larger caliber of cannon on the ships.

But here comes my problem. My ships, even if made of hardened wood, are still just slightly better version of age of sail ships. And in the age of sail, as far as I'm aware naval artillery was quite limited in terms of caliber. Largest pre ironclad cannons I could find were 68 pounders. I assume this had some reason.

So, my question is, what would I need to change to make those ships so that they could withstand having tens of cannons of far larger caliber (say something similar to Mons Meg, although caliber could be less, 250-400 mm range) and firing them at enemies?

Inspiration can be taken from the technology that helps modern cruise ships maintain upright stability.

Stabilizers can be grouped in passive or active systems. Given that most active systems require some form of computerized calculations I'd recommend a passive stabilizer technology called a bilge keel. Bilge keels are typically applied one on each side the hull and extends a short distance down and outwards from the hull. This makes it so that as the ship rolls the bilge keels generate turbulence underwater and work to counter some of the roll. In battleships these could get quite large.

The limiting factor on early cannon was the iron they used. If you look at pictures of 18th century cannon, you'll see that they typically had extremely thick barrels; that thickness was needed to prevent the barrel from splitting when the charge went off (creating shrapnel that would kill everyone on the gun-deck). The larger the weight of the shell, the greater the charge needed to send it off. 68 pounders seems to be the practical limit before using the cannon became more dangerous to the crew than to the enemy.

This problem was eventually overcome by the use of hardened steel and machined barrels (as opposed to the cast or rolled iron barrels we're talking about). But I imagine that if one could magically harden wood one could also magically harden iron, so perhaps you could improve power output that way.

If you're going to use magic in your world, then you will have a magical arms race right along with the more conventional technological arms race.

At a frame challenge, you don't need to have super caliber cannon.

Rather than relying on the cannon to damage/destroy the body of the ship, you now have to target the sails and any sailors exposed on the decks. Cannon would use grapeshot, chainshot, and maybe incendiaries (napalm?) for ammunition.

Once the sails are damaged, go in for the boarding action.

It's not the ships that are the problem, it's the cannons.

The weight and recoil of the cannnon being fired isn't actually that big of a problem, especially if you're looking at 'mortar' style weapons like the Meg where much of the force is pushing the ship down into the water as opposed to standard cannons where almost all of the force is being applied parallel to the ship's deck.

So, it wouldn't be a huge problem to mount ten or twelve or even twenty Meg-sized guns on a ship like that instead of the massive broadsides that they actually had.

The main problem you're facing is that Age of Sail metallurgy just didn't allow for cannons to be reliable at those sizes, which is why the Mons Meg burst its barrel. 19th century steelmaking just doesn't have any way to reliably contain the kind of pressures involved once you start getting above the ~25lb charges that the 68 pounder used.

The other main problem you're going to have is just hitting the target. Your ships made of magically hardened wood are going to be stronger AND FASTER than the actual age of sail ships were because they can be lighter, more bouyant, and carry more sail without risking the masts. They'd probably be larger too, because you get efficiencies with size of sailing ships. Take a fast frigate and make it 20% larger and it's even faster, as long as you're not running up against the physical limits of what you're building it out of.

There were quite some reasons for the limited size of the cannons, in order to have them on board you would need to:

Aside from the very informative answers already posted, the key limitation is the weight of the cannons and how that affects ship handling.

You want to have the mass of the cannons as low as possible (when looking at two and three decked battleships of the line, the cannon on the upper decks were generally smaller and lighter than the ones on the bottom deck). Too much weight high up makes the ship vulnerable to rolling and even capsizing. One thing which is often overlooked in "age of sail" battles is the gun captains had to account for the roll of the ship when giving the order to fire. An unstable ship with a greater tendency to roll will be a terrible gun platform, since the barrels of the cannon will swing through huge arcs, making ot extremely difficult for the gun captain to estimate the range and the elevation to determine when to fire.

The Vasa illustrates the other problem. She was the King's flagship, so during the building process was given a larger and larger battery. She was so low in the water that sailing with her lower gunports open turned out to be the cause of her sinking, as she heeled and took on water. The "Mary Rose", King Henry VIII's flagship, similarly sank due to capsizing, and it is thought that the late addition of large numbers of bronze cannon contributed to the disaster. 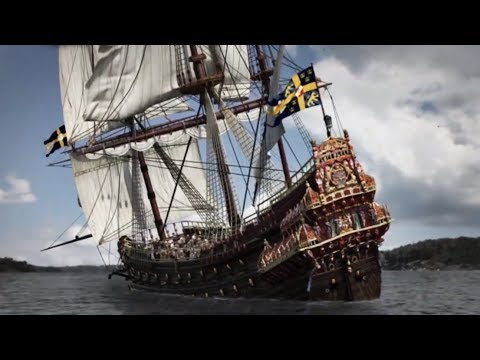 So a ship carrying large numbers of large cannon will start to encounter difficulties.

This is not to say that it is impossible for a sailing ship to carry heavy cannon, just that you will have to think of the problem differently. There was a class of vessel designed to cary huge mortars for bombarding shore targets, and potentially could be used against ships as well (although shooting at ships in harbour or passing through a narrow choke point would likely be the only place this works). The illustration shows a model of a "bomb ketch" which was specifically designed and built for this puropse 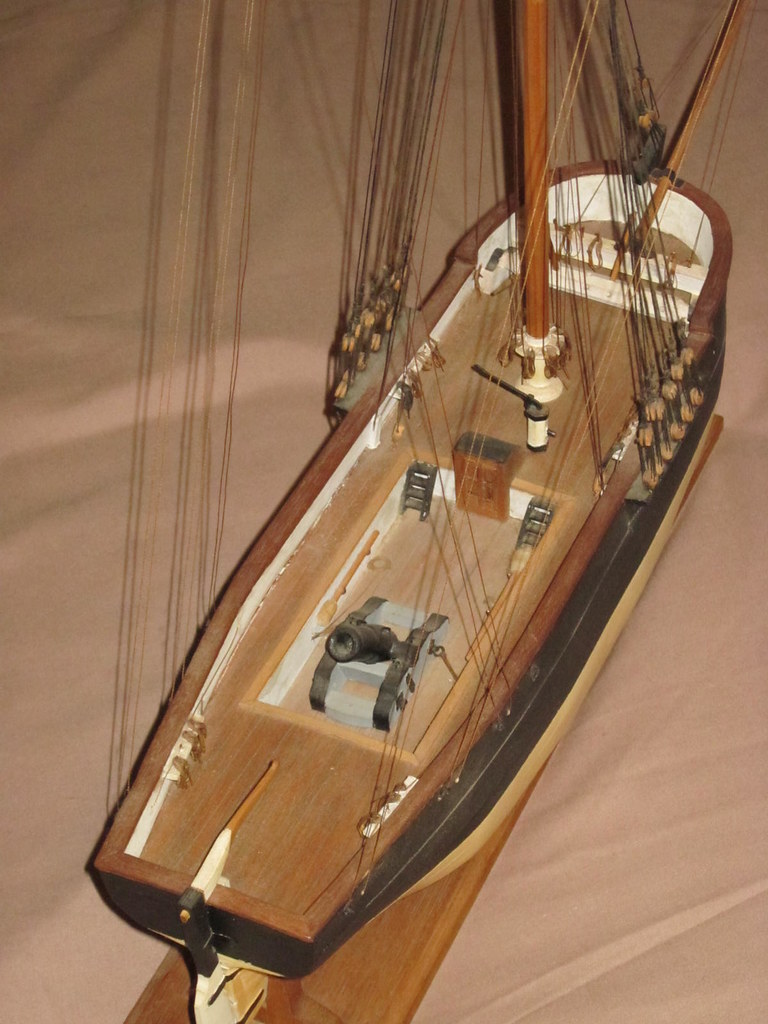 So the problem can be solved, but it needs a frame change to do so.

Cannon handling is probably your biggest problem. In the age of sail the cannons were often not fixed. Allowing them to role back helped manage recoil during a broadside, however there was also another reason. A ship might not carry enough guns to fire from all ports. Guns could be moved all to one side to give the greatest possible broadside fire power, leaving the other side undefended. If you make the cannons too big they will be hard for people to move around or keep secure. You may also have to increase the height between decks, reducing the usable floor space.

Penetrating armor does not necessarily call for a larger caliber, as modern weapons show. Your best approach would be to use shaped charges -- that way you can penetrate great thicknesses of armor with relatively small projectiles.

And given that they are sailing ships, maybe going for the hull is making life difficult for yourself? Just take out the sails and rigging and you have a mobility kill, rendering them helpless.

Alternatively, incendiary rounds (or hotshot) would still set them on fire.

Or you could use the other age of sail tactic and attack by boarding.

Not the answer you're looking for? Browse other questions tagged warfare firearms sea age-of-sail or ask your own question.

1
Naval cannons vs ships made of magic wood

8
Massive Murderous Destruction (also Manportable)
1
Can a river or a sea made of gas exist ? A sea of clouds to sail it
3
Requirements for naval-analogue space warfare
12
Naval warfare in a Bronze Age setting - few big ships versus many smaller ships
1
Naval cannons vs ships made of magic wood
5
How does material-magic change pre-industrial warship-building?
5
Age of sail navigation tools for a planet with a ring
2
Age of Sail ship design to face rogue waves?