How to optimise the use of 10 nuclear fuel pellets in medieval period?

Suppose 10 standard nuclear fuel pellets have been sent back in time to the 14th century A. D. scattered across 10 adjacent towns via a disposable time machine. Would people in the medieval period be able to fully utilise the fuel pellets? Could they develop useful applications out of them? Could they discover the atom, and particularly the neutron, without being informed? Can the pellets turning their destinations into ghost towns be avoided? Note that only the fuel pellets are sent back in time. The disposable time machine and any writing or papers would not survive the trip.

You cannot optimize a zero.

First of all, fuel bars in nuclear reactors count hundreds or thousands of those pellets. It's like I ask you to invent the car engine just by giving you a drop of gasoline.

Furthermore there is no way for a person with the knowledge level of 14th century to have the faintest clue that what they are handling is a radioactive material.

In particular, it wouldn't even trigger their curiosity, because non irradiated pellets are not so active to become hot. Look, in the picture below a technician is handling one with no protections! And I even remember that, when I visited a nuclear power plant in Germany, their souvenir shop sold keychains with a pellet encapsulated into Plexiglas. 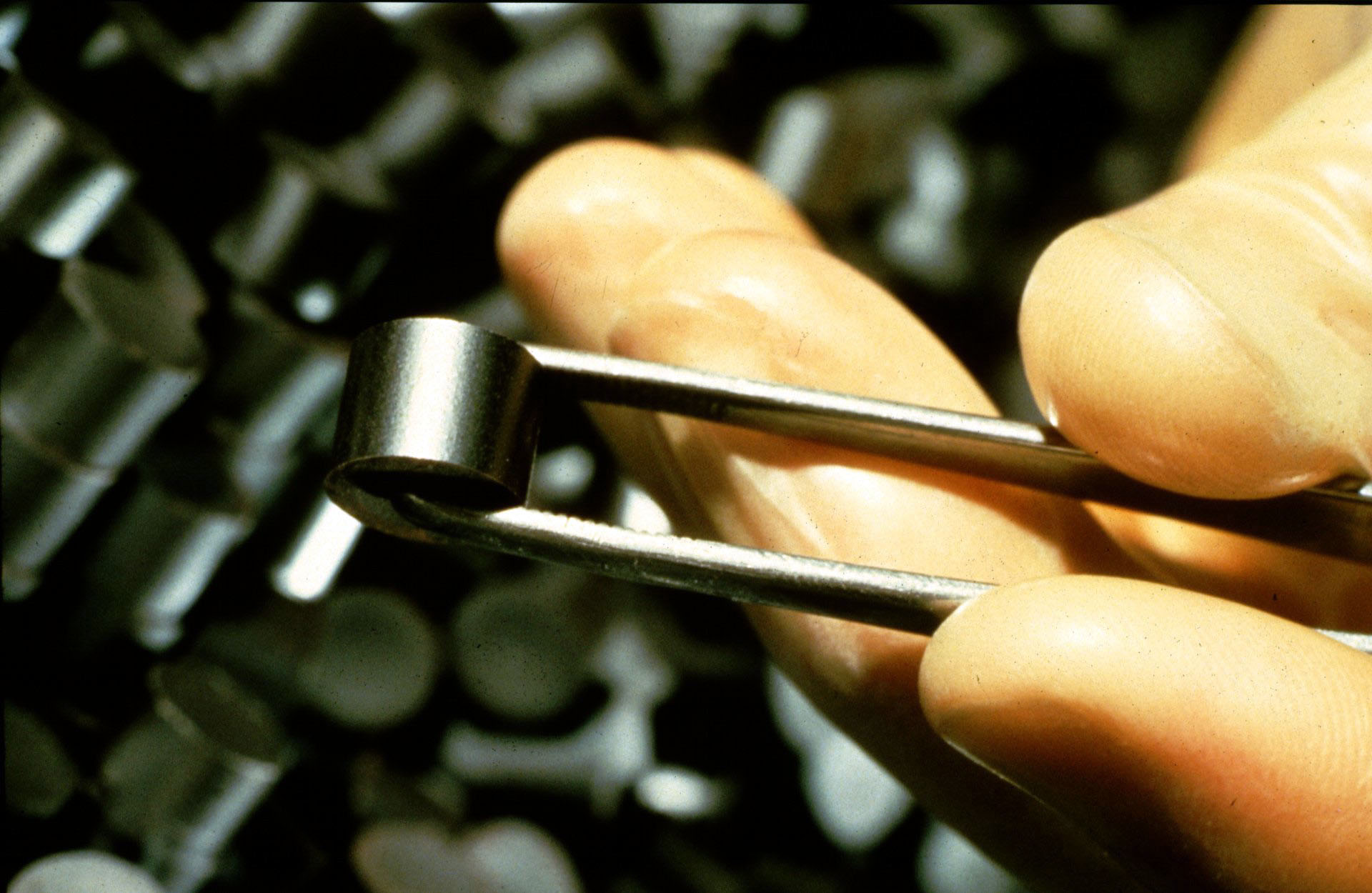 Now, if you see a stone which spontaneously stays hot, like plutonium would do, you as 14th century man would probably throw it away as something which is clearly devilish (hell is eternal fire, and this stone is constantly hot, you don't need to be an Aristotelian scholar to connect the dots).

But this particular stone is just fancily shaped and shiny black. If you are in good mood you would probably donate it to the local church to have it embodied into some holy statue.

The inhabitants would not have the faintest idea what they were they would just be rather curious small round cylinders. They would probably find a use for them as a sling stone or similar but they would impart zero understanding of nuclear physics.

One of the biggest problems being the completely different culture and mind set before the enlightenment. Things we take for granted today such as science, technology, progress and much more either didn’t exist at all or existed in a form we would not recognise. The world into which these fuel pellets arrived would be culturally very different.

Would they be able to fully utilize the fuel pellets: no Would they be able to develop useful applications with it: no Could they have discovered the atom and neutron: no How to avoid a ghost town: There would be no ghost town the pellets are not that dangerous (assuming they have not been used). Radiological damage would be minimal and totally overwhelmed by the effects of disease, hunger and common accidental injuries.

The fourteenth century is centuries too far back

Physics won't be invented for another 300 years. Isaac Newton essentially invents the discipline in 1687 with the publication of Principia. He had to invent a new branch of mathematics in order to do that. After that happened, several hundred years of progress in physics was required before people understood enough to even notice the tell-tale phenomena proving the existence of radiation.

There is no chance of the pellets leading to the discovery of the atom, let alone subatomic particles. Denizens of the fourteenth century simply didn't have either the tools to properly study such things, or the know-how to really understand what the tools might tell them.

The pellets would produce alpha radiation (thank you Mark) which your skin is sufficient to shield you against. So radiation sickness is unlikely to be a problem. But even if it were, it isn't until 1854 that someone used mathematics to connect the dots and prove the cause of a cholera outbreak is a contaminated water supply. It is therefore unlikely fourteenth century citizens would be able to work out how radioactive materials cause radiation poisoning, especially since they poison you without you so much as touching them. Which fuel pellets can't cause anyway.

About the only use 14th century folks might be able to work out is the pellets are an inexhaustible source of heat (except, as others have pointed out, not all that much heat anyway).

You know, forget all the nuclear stuff, what we got here is ten objects having IDENTICAL (from a 14C perspective) dimensions and weight.

That has serious value because all of a sudden I can give one of those to a blacksmith and say make me 10 sets of bearings that this thing will exactly fit into, and I can go to ANOTHER smith and say make me ten axles that are the same size around as this thing, and the two sets of components will WORK TOGETHER!

What we have here is the beginnings of metrology. Now granted it would have more value in say the 17C (Queen liz was standardising the bores on naval guns by then), and it takes an industrial revolution or serious war for the value of interchangeable parts to really show, but I have to think the Romans would have gotten it a 1400 years earlier.

These fuel pellets are in fact gauge blocks that just happen to be made of Uranium.

If these pellets were not used, then you'd have a cool, extremely dense metal that rusts slightly faster than untreated iron. A time traveler with a geiger counter would be able to detect it from very close up, and it would look spectacular in a cloud chamber, but both of these technologies are centuries away; especially since the cloud chamber requires active refrigeration.

You can rub it against your skin and you wouldn't suffer any effects of radiation poisoning, because the particular isotopes of uranium used in fuel rods are alpha-particle emitters. This is ionizing radiation (as opposed to the light from your computer screen, which is "radiation" in the pedantic sense, but isn't dangerous, as it doesn't knock electrons loose). Fortunately, alpha-particles are the slow and heavy sort of ionizing radiation... They have a big kick, but they can't make it through even a sheet of paper, and a few inches of air will stop most of them. The dead skin cells covering your body are more than adequate protection from alpha radiation.

Someone with modern knowledge could grind it up and use it as a poison, as it is also a toxic heavy metal, similar to mercury, lead, and arsenic. Also, once inside of your body, you no longer have the layer of dead skin cells to protect you from the alpha radiation, and depending on the dose, you may get acute radiation syndrome. Keep in mind that your own body already has radioactive isotopes inside of it, especially from potassium. The body already knows how to deal with healing damage from ionizing radiation, so you need a somewhat large dose over a short time to kill someone from acute radiation syndrome.

However, if they were used to produce sustained fission reactions as the question suggests, this means that they're no longer pellets of just uranium oxide. There is now a very small but significant fraction of iodine-135, an extremely energetic, beta particle-emitting isotope of iodine.

Beta particles are far more dangerous than alpha particles; much lighter and faster, which means they penetrate much more deeply. You'll want a couple of inches of dense material as shielding. While thick sheets of lead are the prefered material, in this setting, a couple of feet of dirt are the best protection.

135I has a half-life of 6.6 hours. With such a short half-life, it's spitting ionizing radiation into the environment at a horrifying rate. Holding a fuel rod for a few minutes within an hour of it being used in sustained fission will likely kill you within a week.

Iodine is also taken up by the thyroid, creating a mode to extend exposure in case someone was unlucky enough to take it in, such as "rust" on the pellet getting into the eyes, nose, mouth, lungs, or open wounds.

135I decays to 135Xe. 135Xe has another horrifyingly short half-life, at about 9 hours, and is also a beta emitter. Xenon is a noble gas, which means that it can't be toxic, but as a gas at standard temperatures and pressure, it's also going to be trying very hard to get out of the fuel pellet and into the atmosphere. This also makes it quite easy for it to get into someone's lungs.

Fortunately, 135Xe decays into 135Cs. Caesium itself is only mildly toxic, similar to uranium, and 135Cs also enjoys a very long half-life, making it an insignificant source of radiation. It is highly chemically reactive... which means that unless the 135Xe decays inside of your body, any caesium from the pellet will have likely found something else to react with. Still, it's going to be taken up by your body, and your body will try to use it in place of potassium for a while. Best not to lick it.

After 200 days after being in a reactor, your fuel pellet is going to go back to being just a hunk of uranium oxide (albeit, depleted uranium rather than fuel grade uranium) with an unusually high concentration of caesium-containing chemicals around it. Some animals will have gotten sick... dead plants in the area will take a bit longer to decay... but unless someone knew specifically what to look for, your fuel pellet will be a weird rock with yellow rust.

Keep in mind that fuel pellets are tiny. A fuel rod is hundreds of pellets. A fusion reactor requires hundreds of rods to work. Even with modern technology and an intimate understanding of nuclear physics, nobody is going to do anything interesting with 10 pellets. The most spectacular thing that can be done will be putting it in a cloud chamber, but again the technology to create that didn't exist in the 14th century.

Not the answer you're looking for? Browse other questions tagged technology medieval time-travel nuclear or ask your own question.

54
How to introduce my perpetual motion invention to the scientific community?
1
Is it possible to erect an electric fence in medieval period?
0
Could someone use a nuclear weapon to destroy the universe?
3
Lead as a nuclear fuel
3
What will happen to a spent nuclear fuel pool without routine maintenance?