How can I create long fall boots?

The long fall boots are special footwear that extend from your feet to your knees. They enable you to fall from an indefinite altitude in Earth-like gravity without damaging your body when you land.

How can I create something like this? If “indefinite” is impossible, what is the maximum height that boots could theoretically protect the wearer?

An example of what I'm looking for is the long fall boots found in Portal.

All you really want to do is decelerate. Landing on the ground with a big splat is technically also deceleration, it's just far too sudden.

We need to do a certain amount of work to slow down. We could do this with a lot of force over a small distance (say, splat on the ground), or we could do it with a smaller force while increasing the distance.

Stealing a different posts numbers, we know that a human's terminal velocity (basically worst-case scenario) is $50\frac{m}{s}$. If your human weighs 60kg, the formula $KE_{inital} = \frac{1}{2}mv^2$ gives us 75 kilojoules.

We can forget about the minus because in this case it only has to do with direction, which is easy enough to understand in this case anyway. So, 75 kilojoules = Force * distance.

Here's the question, how much force can our human withstand? Trained fighter jet pilots with special suits can withstand up to about 9g of force, or about $9*9.81kg \frac{m}{s^2} = ~88 kg*\frac{m}{s^2}$ while maintaining consciousness. We have our force!

The boots would have to extend almost a meter below one's feet and then somehow absorb all that energy over the whole distance. 85cm is quite a lot, but maybe it would be easier to do if the boots didn't have to absorb all of the energy and left some of it to the user's legs. Maybe the boots are more like an exoskeleton around the legs, meaning they wouldn't have to extend far below the feet. Then again, I didn't include the weight of such a contraption in my calculations.

All in all, it's not absolutely impossible from a physics standpoint, but it would be very uncomfortable (9g are not fun) and you'd still have to do something with all that energy. You could turn it into heat, but that would require a lot of cooling. Or maybe, you could use it to power an Aperture Science Quantum Tunneling Device...

Let us consider how footwear might slow one's fall to a slow and harmless pace. We want these boots to limit terminal velocity.

Variables we cannot control: my weight which we will set at an ambitious 90 kg (I did once weigh 90 kg), gravity on this good earth and air density. 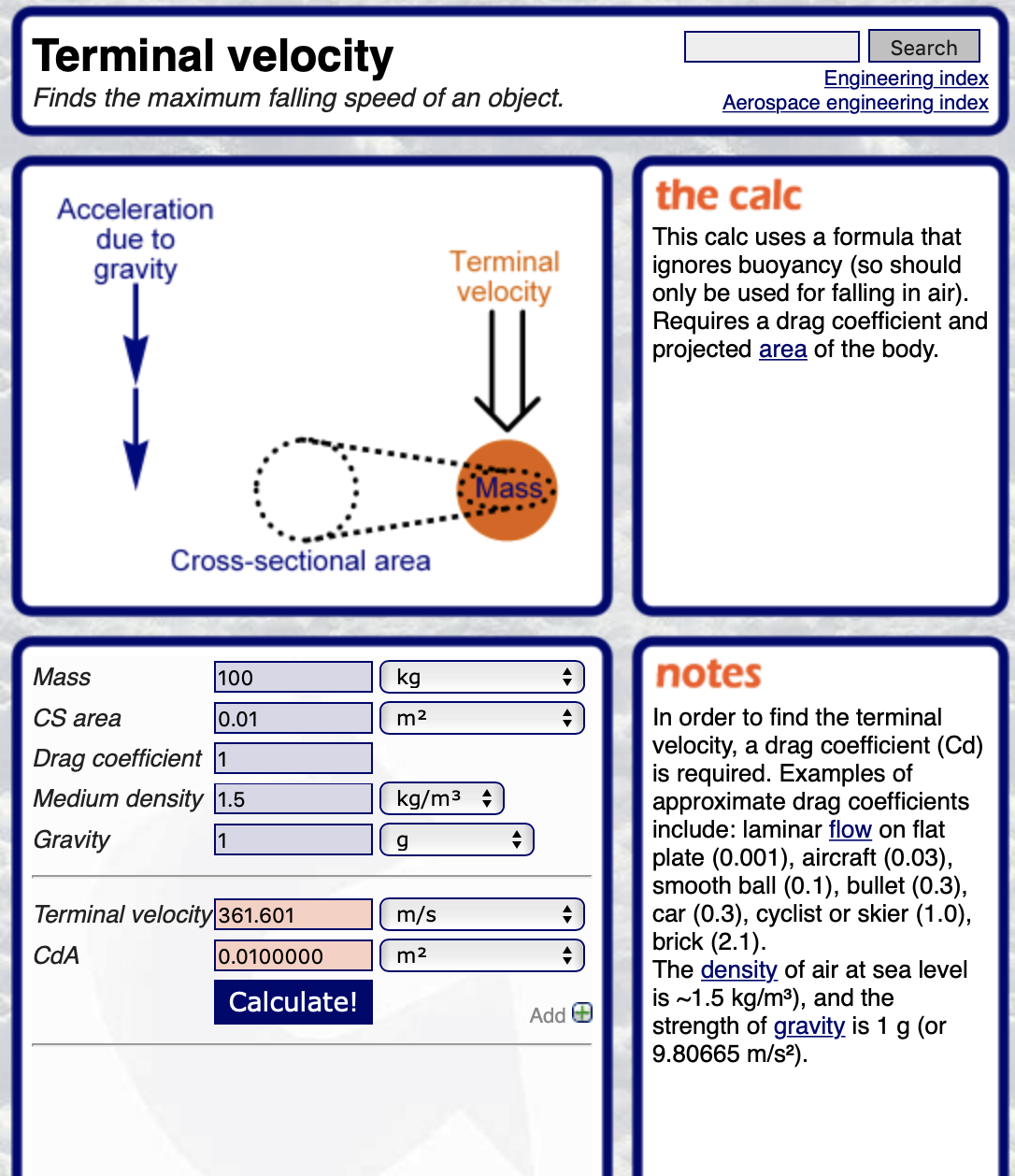 361 meters per second is 807 miles per hour which my Yankee brain can comprehend more easily. Too fast! A variable we can adjust with footwear is cross sectional area. I want something that will let me land at less than 10 mph. With successive iterations I determined this. 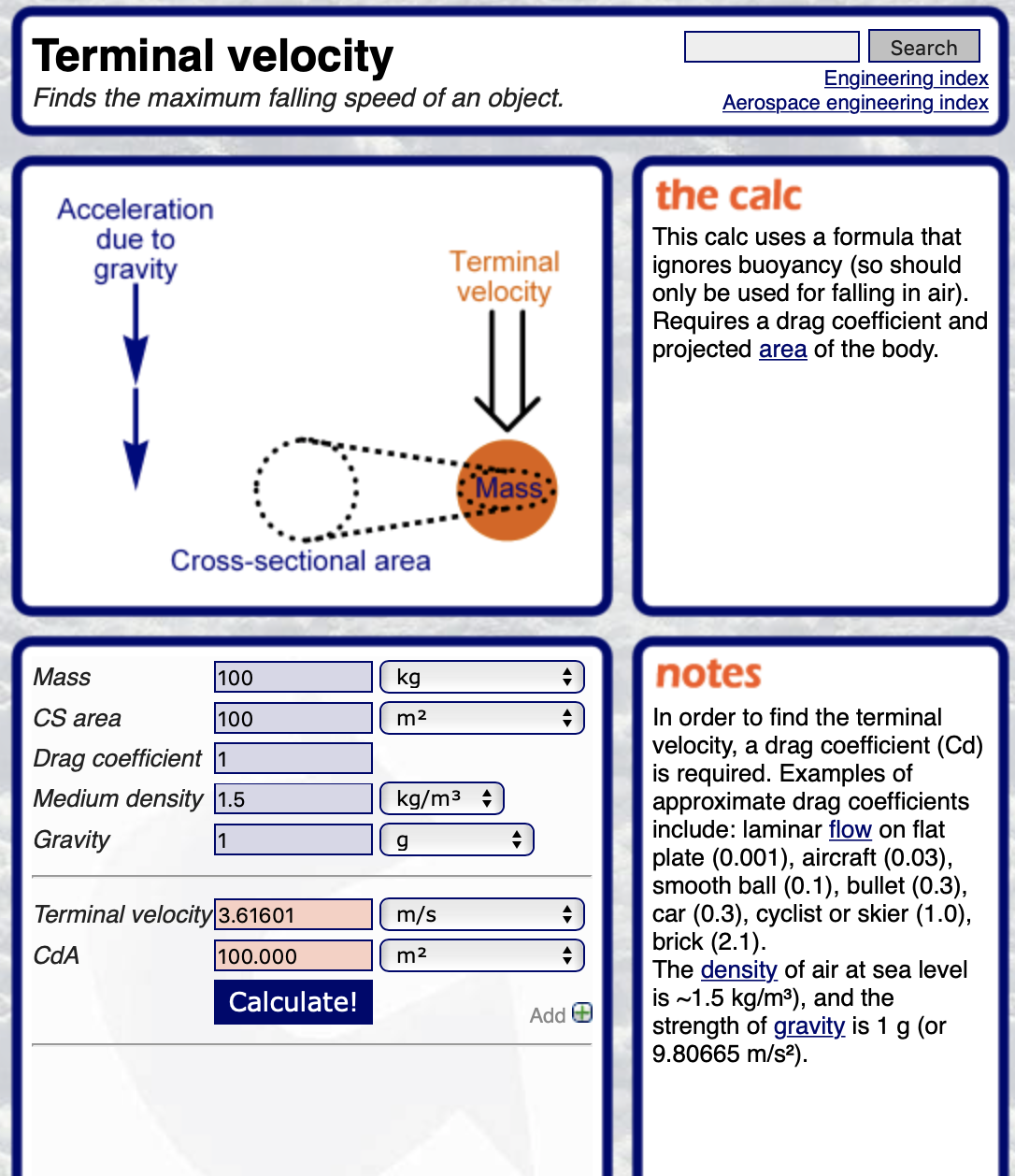 Considering practicalities I think a shared sole might be better than two soles each measuring 50 meters squared. With two soles I think there would be a tendency to force my feet apart, letting wind blow up my skirt and decreasing the cross sectional area / increasing terminal velocity. One sole with a snowboard-like pair of foot clips would be better.

A nice thing about this setup is that with practice you should be able to steer fairly well on the way down. Also there is no risk that these shoes will explode, or run out of charge, or fail halfway down: they do not require any source of power.

The bottom of your sole should be painted sky blue, possibly with a large bird silhouette to be inconspicuous.

By itself almost certainly not in any kind of practical package. This would work better if you added a parachute for the extreme distances in which it would be effective. Felix Baumgartner set the minimum altitude limit of 30 meters, jumping from the hand of the Christ the Redeemer statue in Rio de Janeiro. This also requires a static line parachute that is tied off. You'd have to have some kind of smart system to determine you're in freefall instantly and deploy your parachute.

So, at that altitude, you'd otherwise have a final velocity of just under 25 m/s, vastly better than the true terminal velocity of a falling person. Shoes to handle this impact might actually be physically possible, though I otherwise have no idea how you'd do it. Dan Koko set the world record for falling onto an airbag at around 100 m. Unfortunately for the shoes concept this required a 7 meter tall airbag that weighed nearly a ton. An inflatable airbag that also increased air resistance without tippling you over might actually work for the smaller required height, but it would really only work once. You'd need something ridiculous to be able to repack itself to be used with the frequency seen in the games.

8
Would "land assist" technology be possible in real life?

5
How can a molecule grant long-life?
4
How do I Create a Privacy Shield?
7
Alternative for magnetic boots
20
How to create a seawall with medieval technology?
4
What is the longest amount of time that salted bombs can deny human habitation?
4
Could there be a situation where a plane would be certain to be destroyed by dropping an atomic bomb?
2
How to create a volcano?
5
Plausible design/size of flying cities?