How effective and viable would bronze full plate be?

In my fantasy setting in development,tin is significantly more common than in our world. Leading to bronze armour and weapons being much cheaper. Due to metallurgy not being as advanced iron is still not commonly used in armour. Being too difficult to work with much as it was in our own history for quite some time.

However,due to the threats faced by the peoples of this era and their natural desire to provide further protection to their elite warriors;full plate harnesses were created.

My question is how good would quality bronze be for this purpose and would it be as widespread as normal plate armour was in our own history as a result?

Edit:Requested since people may not see the comments.

As many people have pointed out,the Dendra Panoply was indeed bronze plate armour. I am also aware of the use of bronze for breastplates & helms well into the early medieval period. Keep in mind I am asking asking IF given how common tin is in setting (directly lowering the price of bronze & its value substantially) bronze would be a good alternative to cheap iron for use in a full plate harness. These people may not have metallurgy as advanced,but that does not mean they are exactly like our bronze age. They are closer to the Early Medieval era but their metallurgy lags behind comparatively

As such they can and do create chainmail. With bronze and even iron being used. The main issue is that they cannot properly forge large plates of iron. Limiting the usefulness of it for use in plate or segmented plate. Hence bronze is used instead due to its abundance.

The knights in question can serve both on foot (as foot knights) or as heavy cavalry. This does not mean they wear the same armour for both,much like in our own history. However I will mention that most knights could and would fight on foot even if unhorsed. For it was only post-gunpowder that armour began to get extremely heavy in an attempt to proof armour versus firearms. (which had varied results and proved overly encumbering for a full set of armour)

The knights here use bronze plate much in the style of the Early Medieval period. (A time where most plate was bronze and not iron in history)

However,due to the threats faced by the peoples of this era and their natural desire to provide further protection to their elite warriors;full plate harnesses were created.

Bronze plate armour did exist... have a look at the Dendra Panoply:

The original (photo from wikipedia) and an artistic impression of unknown origin (appears all over the place with no source information): 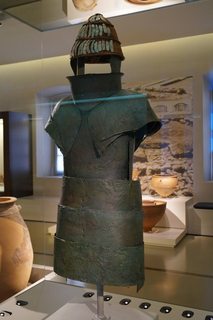 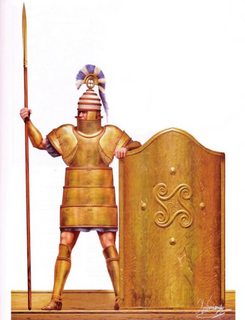 Whilst it might not have looked as neat as fancy modern plate does, it wasn't particularly restrictive and would have worked OK (right up until someone stabbed you in the knees, presumably).

would it be as widespread as normal plate armour was in our own history as a result?

Note that this stuff was expensive. Really expensive, and hence somewhat unusual. Upper class nobles would have used it, which isn't quite the same as "elite warrior" (though you can handwave that detail in your story, I'm sure). Less elaborate and all-covering getups would have been used by less wealthy combatants. Note also that this is an infantry outfit; cavalry would wear equipment that was even lighter and less restrictive... no equivalent of medieval knights on horseback (if nothing else, the horses would probably not be strong enough!).

Quite how common medieval full plate armour was is perhaps something for a different question, but remember that it, too, was very expensive and far from commonplace.

Good enough I'm sure, given that it would be facing brozen weaponry. Imperfect, as armour designs were still very much in their infancy (check those knees!) but fine, until your neighbours started deploying iron, or merely very large armies.

Plate mail was common in the late bronze age. Greek nobility often wore platemail that was in many ways very comparable to the the steel transitional-plate later worn by early medieval knights. While ancient Greek armor had more exposed gaps than medieval plate armor, one can see from the shapes that the metal could be formed into all the same shapes as steel plate. 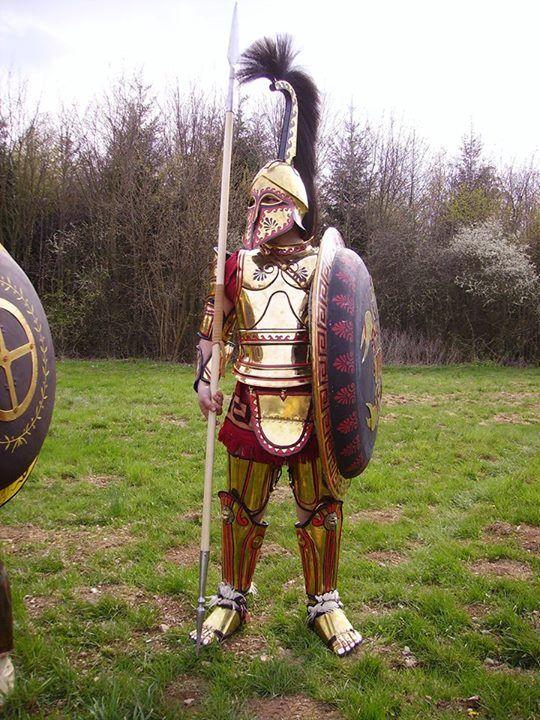 While it is true, that bronze was replaced by iron, this actually had very little to do with its quality as an alloy. Contrary to popular belief, bronze armor was in many ways superior to iron and many pre-industrial steels; however, tin and copper were really hard to come by in the same regions meaning long trade routes made it very expensive. Most modern recreations of bronze weapons and armor use un-hardened bronze which makes bronze seem deceptively soft however, modern recreations made using proper harding techniques show that ancient bronze could be worked to have properties very close to the half-quenched carbon steel you see in katanas.

In the early bronze age, wars were often fought between noble citizens who at the time were typically the upper 1% most wealthy people in the country because the middle class could not afford good bronze weapons and armor. During the late bronze age, many armies transitioned to using much less bronze per soldier favoring large shields in lue of full body armor which made warfare affordable by closer to 10% of the population.

Iron ore can be found basically anywhere which furthered this trend making weapons and armor affordable for an even larger portion of the middle class, and opened up the possibility for professional armies which was their real advantage.

A poster pointed out the Dendra armour, which is provides pretty comprehensive protection. High quality reproductions show it is a very effective suit, even to the point of having asymmetric arm holes so the weapons arm has more freedom of movement. While there are some opinions that this was designed for a person fighting from a chariot, tests with high quality reproductions indicate it is easy to us fighting dismounted as well. If the Iliad is any indication, chariots seem to be more a method of getting around the battlefield rather than a fighting platform in that particular place and time, but that neither negates or supports the idea of the Dendra armour being "chariot" armour or infantry armour.

A second way to look at how effective bronze armour is would be to look at weapons of the period, since they are specifically designed to defeat armour.

Both historic descriptions and depictions of weapons and archaeological finds show that weapons were already highly evolved, with multiple choices for the warriors from long rapier like swords (evidently to go through joints in the armour or seek out weak points like striking at the neck area with a downward thrust), long thrusting spears, axes, maces and so on, most of which would be recognizable to knights in the middle ages. Projectile weapons like javelins, slings and bows were also available. This comprehensive weapons load out suggests that warriors knew they were up against well protected opponents, and needed multiple tools to achieve their goal of killing or disabling an opponent.

Taken together, all these things should establish that bronze armour was very effective at protecting people. A full suit of bronze armour would be very expensive, and the Dendra armour was likely for a very high ranking person, but most war leaders, nobles, personal retainers etc. would be able to have a fairly effective level of protection, even if not an entire suit like the Dendra armour.

In our history we have a period called bronze age for the very reason that the leading civilization of those time were those mastering bronze production, since it was better than any other available material.

Then it came the iron age, where people mastering iron manufacturing could easily defeat the bronze equipped enemies.

Since you state that iron is not common you are in the same scenario as our bronze age, with bronze being the best choice among the available materials.

Standard tin/copper bronze is a similar density to steel, so plate armour of similar thickness would weigh similarly to steel plate. Bronze is easier to work by hammering and casting than steel, so your armourers would be able to make plate thinner (hence lighter) if appropriate, and also to vary the thickness across the plate more carefully.

Bronze is not as hard as steel, which means it won't hold an edge as easily, but is also more ductile, which means it will deform under stress (like being hit) more easily. So a clash of a bronze sword vs a bronze plate is going to be more like a clash between a very dense piece of hardwood and a steel plate: unlikely to cut through, but probably quite a lot of deformation damage. A bronze sword is at a disadvantage compared to a common-or-garden club here because bronze is also quite brittle, so the chance of the sword shattering against plate (of any material) is quite high.

As such, bronze plate would be quite effective against bronze (or obsidian/flint/etc) edged weapons such as swords or spears, and would confer a tactical advantage in melee combat. It would be of limited utility against blunt impact weapons like clubs and maces (better than nothing, but probably not much better) and next to useless against projectile weapons like slings and arrows, which would penetrate with ease unless the plate was made impracticably thick.

It doesn't matter how common tin is, bronze plate will still be really expensive.

First: The expense of armor isn't based on the raw materials at all, really. It's all about the armorer's TIME. It isn't going to be significantly quicker and easier for someone to make a suit of plate out of bronze than it would be out of steel, it's just going to be heavier and/or less protective.

Second: The other important element of full plate armor is that it only started really becoming worth the trouble of making it when you had horses that could carry a guy wearing it in battle so, metallurgy aside, neither bronze NOR steel plate are going to be worth the trouble and expense of making it unless the civilizations doing so ALSO have advanced far enough in horse-related technology to have developed the stirrup and bred stronger horse.

Not the answer you're looking for? Browse other questions tagged armors metals metalworking or ask your own question.

31
How do I encourage fully armored knights to carry a shield
13
Lightning striking full plate — what’s the damage to the wearer?
8
How would medieval combat differ if its arms and armour were refashioned today?
6
What Limitations or Modifications Would Medieval Armor or Weapons Have if Modern Quality Steel Were Used?
4
Could a society attain 1800s technology if limited to using copper and bronze?
60
Is it possible to create a practical sword that's naturally toxic?
18
Full plate - ways to make individual suits look more distinct
1
Must Make a Major Modification of Medieval Metallurgy
15
Why Choose Less Effective Armour Types?
12
How effective would a full set of plate armor be against wild animals found in temperate regions (bears, snakes, wolves)?