Ask Question
Asked 2 months ago
Active 2 months ago
Viewed 379 times
5
$\begingroup$
Closed. This question needs to be more focused. It is not currently accepting answers.

How the horse evolved to deal with life out on the open plains is...an odd story. Whereas other ungulates could walk through the hard ground with several hooves without problem, the horses couldn't. Instead, they have to walk through with only one large hoof. This is ironic because long ago, horses had multiple toes. But as time went on and they grew bigger, having one toe is actually useful in reducing stress on the legs.

But this, by itself, doesn't make sense to me because the horse is not the largest plainsman on the planet. That title belongs to those who still have multiple toes. The horses used to share the prairies of North America with one-ton bison and camels over seven feet high at the shoulders. Even taller than that was the 13-foot-tall Syrian camel. And then, of course, there are the four species of giraffes, all no taller than twenty feet, yet they seem fine with having multiple hooves.

In an alternate Earth, the family Equidae still exists, but the genus Equus is not among them. In its place is a different genus of horse with a different adaptation for life out on the plains. What other anatomical options would this horse of a different color have for adapting to life on the open plains?

Since the OP was not very specific, here are two very different answers to the question depending on what he means.

OPTION A: How to fill the niche of Equus without a single-toed Equidae

The single toe design is not just about speed. Any mammal with a digitigrade foot has the same advantages, but in many ways the hoof is an inferior design to the digitigrade foot because it can not dig its digits in for extra traction, it does not spread out onto soft sand or mud for extra support, and it can't use its toes for gripping uneven terrain. The only real advantages of the hoof is that you minimize the number of structures to injure. That said, in open dry climates, the foot's flexibility becomes much less important allowing a single toe design to become an option.

The big reason you don't see single hooves on much bigger or smaller creatures is that larger ones like elephants need feet that spread out so they don't sink into the dirt, and smaller ones don't need the extra structure to not hurt themselves and benefit more from the flexibility of multi-toed feet.

While the single toe design is a solution in this specific environment, it is a narrow niche. In theory, you just need to disrupt the environment enough to push the horse out and let a more flexible multi toed ungulate take its place.

To push out or prevent the horse, you just need to do one of the following:

Once you eliminate Equus or one of the common ancestors required to get ot equis, a multi-toe ungulate could fill the same niche for a few million years until evolution forces the 1-toe design onto the multi-toed animal.

OPTION B: How another ungulate could evolve to become a single-toed horse like animal.

The most likely animal to fill this role would be an ungulate of horse-like size that already lives in the plains and similarly relies on speed as its primary mode of survival. One really good candidate for this is The Wildebeest. It is Bovidae not Equidae at all; so, it brings in a few new features to pick from including horns and stripes. The reason I lean towards this animal is that it is the fastest grasslands ungulate of horse like size that is not part of genus Equus. They have a top speed of ~50mph and weigh in at ~600lb. This is a bit smaller than most horses, but if the horse were to never exist, environmental pressure may encourage them to become a bit bigger to fill the same niche currently held by zebras. As they get bigger, their feet would come under the same set of evolutionary pressures that favored the single toe on horses, making their convergent evolution a distinct possibility.

Most likely three toes and hooves like their ancestors

Hooves evolve long ago in the group, they will have hooves, your options are basically the number of toes. But first why animals loose toes.

Weight at the end of limb is a liability, it slows down how fast the limb can move, increases the load on joints and tendons, and increases the calorie cost of walking and running. Toes are weight if you are living in places were linear speed and distance are important there is a strong incentive to reduce the number of toes. In small animals the effect is minor the large an animal get the large the effect and incentive becomes. its not about there being so much weight the animal can't handle it, it is because walking and running is something plains animals do very often reducing the caloric demand of that activity even a little, quickly adds up into a significant savings, thus it is evolutionarily favored.

but toes also control how the foot interacts with the ground both as sensory and by adjusting force to alter ballance. toes of course are also major load bearing elements so loss must be coupled with gains in diameter of remaining elements. So there is also an incentive to give up too much. In forests the advantage of a wide foot in cornering and lack of straight runs also reduced the advantage of too much loss, this is why a single toe is rare.

There are two ways to reduce the the number of toes; even or odd arrangements. even arrangements usually ends evolutionarily with have two paired toes, this gives you the full range of balance and control with two relatively medium sized toes, the weight is split between the two toes.

the odd arrangement is most often seen as a single large toe flanked two one smaller toe on each size, (this is the arrangement you see in bipedal dinosaurs, tapirs, and early equids for instance) the large toe is taking the bulk of the weight and the small toes are used for control. horses found a way to take this one step further they make the central toe very wide and eliminate the lower portion of the smaller toes keeping the upper portion, with all the musculature and tendons. This lets them keep the bulk of the control while reducing the mass of the toes even more. It is pretty unusually solution that likely only works because of the hoof which provides a large rigid contact surface and thus leverage in several directions at once.

So you will see reduction in hte number of toes either to 2 equal toes like bovids and deer or three toes with a large central one and one small one on either side like tapirs, rhino, and dinosaurs. 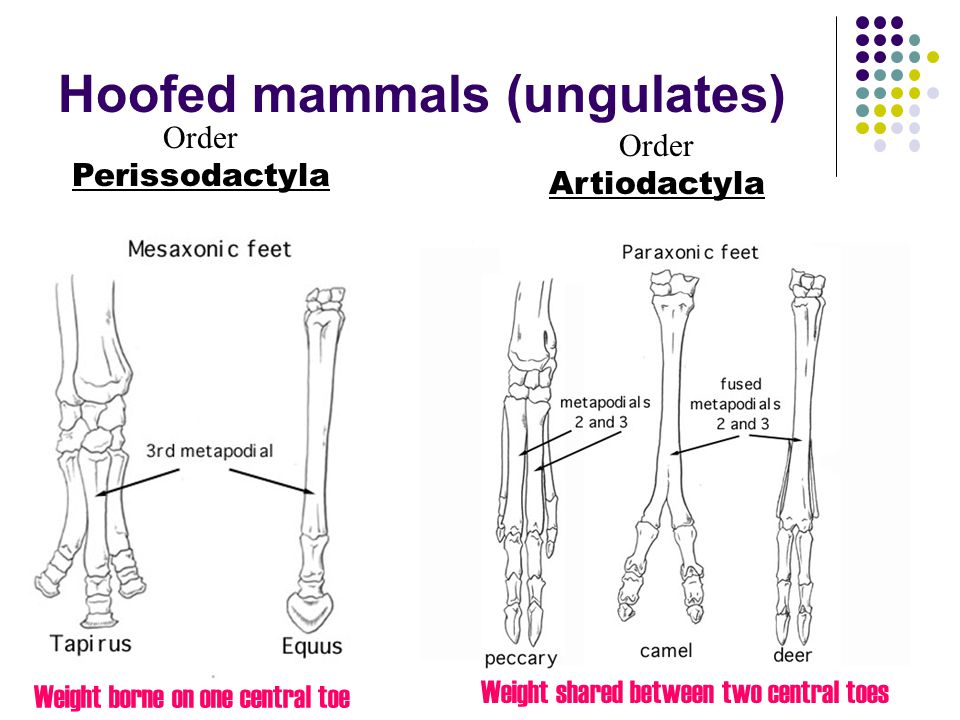 Your answer requires an equid but not genus Equus. So not a zebra. 😞. That is a pretty tight constraint and the Speculative Evolution people might still sneer about lack of creativity. But here is an idea.

1: Start with a recent but extinct member of Equidae. Maybe Dinohippus? 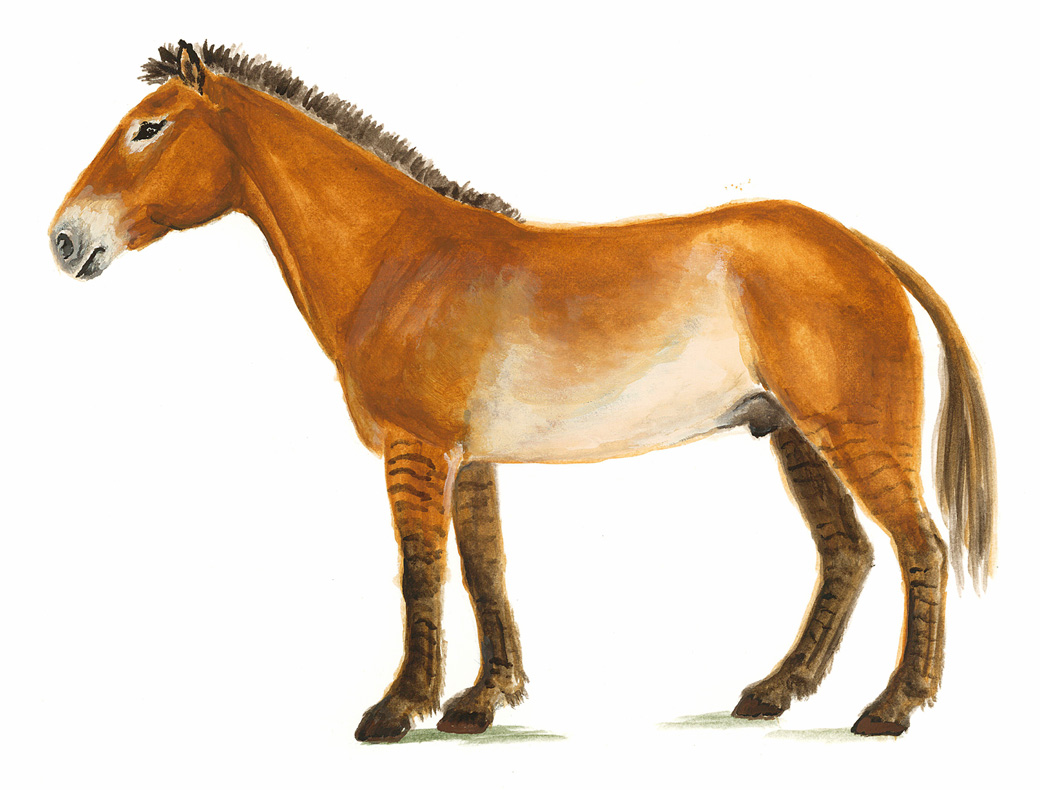 The link says that some fossils identified as this animal had 3 toes and some had 1. !?

2: You will keep these horses in the bison niche. There were apparently huge herds of equids in North America back in the Miocene. Bison were a late arrival to North America and recently (in the last 15,000 years) there were instead huge herds of bison. You could make the non-Equus equines more bison-like: large robust bodies (which might have already been the case for Dinohippus = "terrible horse") and large herds structured like bison herds.

I will respond to your question with a question of my own.

Why would it be different when done again?

Equus evolved for a very specific niche, fast on the open plains. They had other options and took this one, it must have had some advantage in their environment. Given the same stimulus they're most likely to take the same path. It could have followed the same path as the others with multiple toes, but that's already taken, which means there was more competition in that space.

The same situation, the same competition, the same outcome. Convergent evolution and endless black and white seabirds. Take away equus and you get something that looks a lot like equus to fill its niche.

Not the answer you're looking for? Browse other questions tagged science-based creature-design anatomy alternate-earth horses or ask your own question.

18
How would life be different on a planet where intelligent life saw heat instead of colour?
5
Which will survive better, a duck-sized horse or a horse-sized duck? What about the other creatures in this magical world?
15
Anatomically Correct: 4-legged sapient creatures (“centaurs” etc.)
11
Is a four armed arboreal reptile as described viable?
2
Is there any way to tidally lock Earth to the Sun in its current state?
7
The Multi-Purpose Horse: Stage I: Icelandic x Yakutian
31
How far can you travel on horseback while pushing the horse to the brink?
0
A Horse of Many Different Colors…Out in the Open Plains