How could wyverns fight effectively if they can't carry stuff around?

So, two nations are in a war, land is off-topic as it's filled with zombies and necromancer zombies. The other logical option is the sea.

Now, one nation has these creatures, called wyverns.

Wyverns are quadrupedal creatures, capable of flight. They retained five digits on both their forelimbs, with an extra sixth one being modified into the rest of the wing, however, wyverns' posture is similar to that of a vampire bat, which makes fine-manipulation awkward. They're lightly-built and if were to stand on two legs, they would probably reach four meters (mostly because of their long necks). Wyverns have human intelligence and are capable of speech.

Now, they'd make for great scouts and messengers, however, for some reason, they also have to board enemy ships and fight.

The world's technology is roughly an age-of-sail level, except for that guy, but he stays in the background.

Now, wyvern flight is not so super. For a start, forget carrying stuff, as you wouldn't be able to take off even if the load was only a few kilos. And then there's the fact that it's not actually powered flight, just gliding for the most part.

Wyverns are people, and they hate throwing away their lives like a Survey Corps(e) member in Attack on Titan, so don't even think about screaming "Shinzou wo Sasageyo!" and charging into a suicide mission like Leeroy did.

So, I need to find a reasonable tactic/method for wyverns to board enemy ships, while knowing they can't take off with stuff. What could that tactic be?

And in the war the ideal is bombing the everloving place-where-sinful-people-go out of the enemy. Give the wyverns torches, covered in stuff which is hard to put out, like say tar, or white phosphorous, or something of that nature, and just drop them on the ships, lighting them on fire. Ships, by the way, are highly flammable under the right circumstances. Trained wyverns working in groups would be able to drop them on ships well out of bow range, and thus be a terror of the sea. Similar options are raining flechettes or caltrops to tear holes through sails, which is also effective.

Transportation is an issue, but special made wyvern gloves would go long ways to helping, or some form of a lighting mechanism by the torch which lets you light and let go. It should also be noted that there would less be torches, and more just balls of cotton soaked with pitch. Have fun!

A combination of lightweight weaponry and strong legs.

Let's get the weapon part out of the way first, because you don't want them carrying much (or anything). What I'm thinking of would be either spears made from a lighter wood, and/or metal talons to strap on their feet. Neither would weigh much. Here's my idea for how they would be used:

Spears (if you choose to allow that) can be carried into battle and used in an initial dive-bombing attack. You only need enough strength to aim, as your momentum from the dive will handle the energy. This could give them a very deadly initial attack that comes from above, eschewing traditional defenses and presenting a difficult target.

Talons come into play next. Once the wyvern has landed, it can now stalk around the enemy ship on its back legs (maybe using boosts from its wings to add speed and agility) and can pounce on and gore anybody it comes across. These talons, being smaller than a traditional weapon and attached directly to the feet, would not take much weight, but could have serious killing power at short range.

If you want to avoid weaponry all together, these talons could simply be natural, or you could substitute large fangs.

The strong legs are important for the talons, because it turns them into very deadly slashing weapons if you can put an ostrich-like kick behind em.

Breath weapons might be a little far-flung in your case, but it's worth mentioning. This is your classic "acid breath" or "fire breathing" or whatever flavor you want. That way the attack is built-in and requires no extra equipment!

It is lucky for them that they are pelagic, seagoing creatures or the zombie epidemic on the mainland would have been the end of them.

The wyverns live like albatrosses or frigate birds gliding for days at a time and then dropping from a height to catch fish. Besides flying, wyverns are comfortable swimming both at the surface and at some depth. They are actually the clumsiest on land.

Wyverns can stealthily alight on the rigging in the dead of night and sabotage the sails. Wyverns can approach from underwater and (with luck) put a hole in the hull or (more likely) tangle a bunch of junk around the rudder.

A wyvern can swoop down through the gloom and knock the seaman on watch off the deck and into the water. Or sneak up behind him and bite him. I like the scenario where a sneak attack silently gets rid of the watch. More and more wyverns then silently land on the deck, then like the vampire bats they resemble they all shuffle below to where the sailors are sleeping.

Once the sailors are all dead the wyverns will drink all of the fresh water and all of the grog. They will leave one cabin boy alive to serve them. 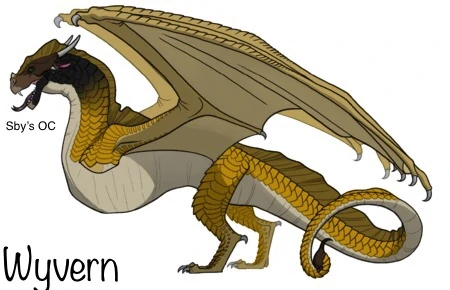 The usual tactic is to dive bomb the ship, sting someone and fly off. Rinse and repeat.

Build torches with an ergonomic handle specifically designed for a wyvern's tail. Light the torches before takeoff, land on enemy ships, jam the torches into the wood, then return.

You could also have the wyverns rip or bite the sails off enemy ships. Or ram the masts down. You mentioned that the technology is "age of sail"; losing the sails or masts is basically the equivalent of losing your engines.

9
How could dragons effectively use their wings as weapons in ground combat?
4
Optimal posture for hexapodal dragon while flying?
9
Does gliding flight give any advantages to dragons in combat?
7
Could a tetrapod Pegasus exist?
9
How CAN a Wyvern be a Scansoriopterygid Dinosaur?
2
How could dragons use their forepaws as hands?
8
Is my idea of Wyverns realistic?
9
How to design a humanoid with facultative quadrupedism?
5
Would hoofed creatures bother with sails on their ships?