How to get time to pass faster on another planet compared to earth?

I'm developing a story where humans colonize a few planets. One planet, lets call it Planet A, has similar gravity to earth, air pressure, and solar radiation. You cannot however, walk on the surface of Planet A with out a space suit, and there is no life, nor most of the essential ingredients. Planet A is arbitrarily far away from earth, it could be in the same galaxy, or across the universe.

Planet A relies on Earth for resources. One day the means by which both communication and transport of those resources stops working (could be wormhole for example), to which the residence of Planet A, after a very long period of time, get the means to travel to earth working again, and travel to Earth.

Part of my story relies on the time between the communication blackout being different for the Planet A side of things, and the Earth side of things, with Planet A experiencing a significant time difference compared to how much time has passed on earth (factor of 2x to 10x longer on Planet A). Note however when Earth's solar system and Planet A's solar-system are connected their clocks are synced or approximately the same (ie time passes at similar rates on both sides). The process of synced time is handwaved, you do not have to explain why it happens.

Is there some sort of scientific explanation for how this could happen? I'm willing to handwave the method of transport between these two far off places, but I'd like to explain the time difference scientifically.

Note, this question is similar to Can time move faster on another world but I do not consider the following to be valid explanations:

This question (and the answers) also don't appear to take the distance between planets into effect, and talk about two planets in general where mine requires earth to be slower planet, so you can't put earth in a massive gravity well or something unless that's plausibly already the case. Finally my question talks about a hand-waved method to connect the two places with "something", which could provide more ground to expand the possible answers since this "wormhole" can be softer science and aid in answers.

Your characters believed the connection to be a wormhole through space, but they have actually been using:

A wormhole through space AND time™

When the wormhole is lost entirely, your characters "repair" it by creating a brand new one. But since they are unaware of the time component, they don't take timeframe into account. Their wormhole connects the proper relative locations, but is "wrong" on the when component. They had no away of detecting the original time difference because the locations are so remote that there were no common events to observe from both ends.

You have added the "science based" tag. And that's a problem. There is no known way to make time pass faster on another planet.

You marked "Accepted" an answer by Mathadict about standard old relativistic time dilation. But this answer is wrong. If two planets are traveling relative to each other, then each sees the other as going more slowly. This is absolutely required by special relativity. Any other choice would mean that there was an absolute frame of reference, the fastest-time frame. And that would invalidate special relativity, which would wreck the whole sequence.

Try this. Let the two planets cross at t=0 for simplicity. One year later, Earth sends out a ship. Planet A sees that ship coming at the same speed they see Earth going. When the ship arrives they find 1 year of ship time passed, for a total of 2 years. But 10 years have passed on Planet A. 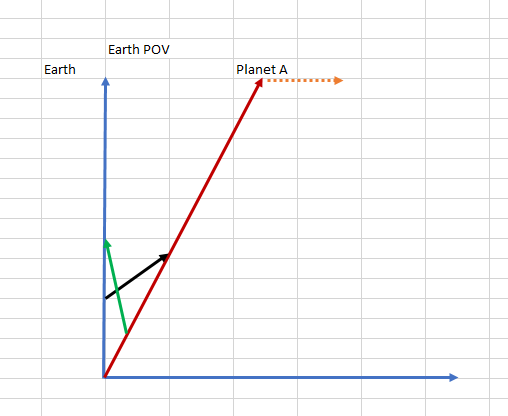 But now look at the same thing from the point of view of Planet A. After 1 year, they send a ship. And Earth sees it coming at the same speed we see Planet A going. And it gets here after 1 year of ship time. But on Earth, 10 years have passed. 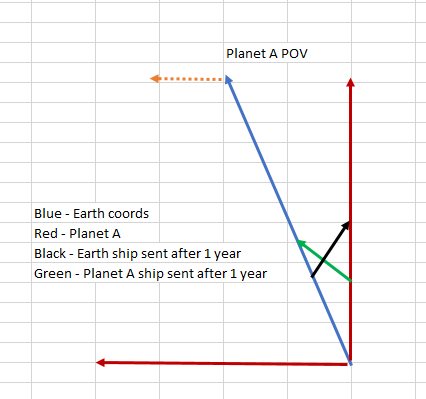 This symmetry is absolutely required by special relativity. You can't "win" using this. The path with the corner will always experience less time.

Now you could slow Earth. For example, you could put Earth in an orbit very close to a black hole. As you get closer to the event horizon, there is a time dilation effect. From the point of view of objects very far from the horizon, things near the horizon appear to age very slowly. Arbitrarily slowly, in fact.

Now it's pretty uncomfortable being at this location unless you have a black hole with very large mass. If you had a black hole with, for example, only a few 100 solar masses, the tides would utterly pull apart anything within even a few dozen times the event horizon radius. Tides would be ridiculous, millions of g's, before the time dilation became useful. However, if you had a black hole with many billions of solar masses, a galactic sized black hole, then you could get useful time dilation before the tides started to pull apart the protons in your atoms. That might possibly work.

So there is no way to speed up Planet A. But there is a way to slow down the Earth. It makes travelling between the two very expensive in terms of change of velocity. But then, you said that was powered by hand waving.

Just normal velocity Time Dilation would do it, this even solves the issue of why it doesn't happen when the planets are "connected"

Not the answer you're looking for? Browse other questions tagged science-based reality-check planets space time .

6
Can time move faster on another world

2
Is ignorance of time dilation effects justified?
7
Tides on a double planet
2
Faster time for humans compared to (more advanced) intergalactic civilizations
3
Scientifically feasible radical time differential between Sol and another star system
14
How large can surface gravity anomalies grow before the planet becomes uninhabitable?
2
How bright does this planet look from its neighboring planet?
3
How would wormholes and teleportation affect the passage of time?
5
How "geologically Earth-like" can my large terrestrial planet get?
18
How would people detect a 1 year time jump between star systems?