Making a Plasma Gun that works

I have seen in this site that there has been constant attempts to make a working Plasma Gun, only to be constantly met up with failure, as shown with my post regarding Warhammer's Plasma Cannons. However, one redditor came up with another suggestion, saying that it would be better if the plasma came in the form of bullets instead of coming out of the muzzle by themselves.

This is what he says:

The most common weapons are plasmas. Essentially railguns, plasmas launch small pellets of helium-3 enclosed in ferrosilica shells that create explosively-formed penetrating jets of plasma on impact. The "ammunition" for plasmas consists of a magazine with separate storage chambers for helium-3 and ferrosilica powder, which is spray formed into a thin shell ballistic template in the receiver, flash-forged by the addition of helium-3, and rail-launched. Long guns, handguns, and scatterguns, particularly those used by military forces, can generally accept the same magazines, and spent magazines can be replenished at ammo depots. While most of the helium-3 goes into the ammunition, some of it is consumed directly in the weapon to power the firing rails, optics, and internal systems. Larger ship-mounted plasmas have their own reserve tanks of helium-3 and FS powder, which can be replenished from centralized stores deep within the hull. The necessary resources for plasma rounds - helium-3, iron, and silicon, can be easily found in space. After firing, without impact in 5-60 seconds (depending on size) the pressure of the gases inside will rupture the thin shell, which will burst harmlessly. Plasma are rugged and reliable, if comparatively lacking in power. Large enough plasmas can overwhelm or even bypass defense matrices. The ballistic template, which controls the shape and thickness the shell, can be modified to produce various kinds of secondary explosive effects, from armor-piercing to incendiary to EMPs. On the civilian end, low-powered plasma weapons with limited payloads make effective less-lethal weapons for self-defense or riot control. Higher powered plasma cutters and furnaces that contain plasma in magnetic fields have a number of mining and industrial applications, but their military use is limited.

What are your thoughts? Just how do we make a plasma weapon that works as it should? And if this doesn't work, feel free to make a suggestion on another Plasma Weapon that should.

PS: It seems that "Plasmas" is the name of his weapon, not the plasma by itself. 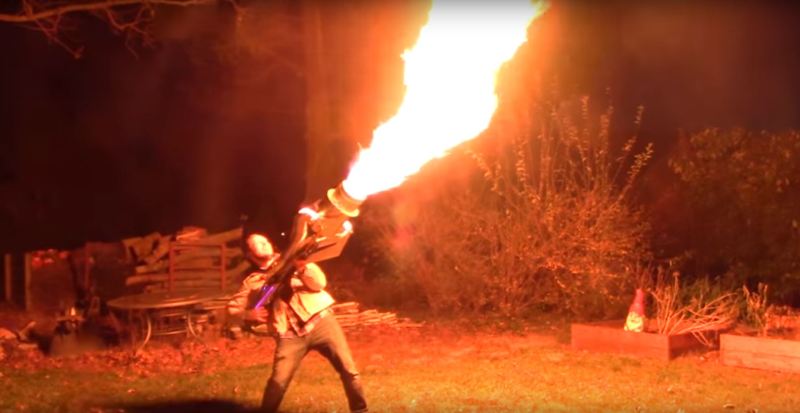 Plasma is hot - like gas but hotter than gas and more reactive. By its nature it will want to expand to fill a large area with glowing ultra hot matter. If you are a sniper that is not too useful. But there are circumstances in which it could be useful.

A plasma vortex will roll out huge glowing rings that expand as they go. This plasma will look like flame; possibly too bright to look at. As the vortex entrains atmospheric air in passage, that air will also be heated to flame bright.

The plasma vortex is an anti drone weapon. Drones are hard to hit with projectiles because they are small and fast. It is easy to run out of ammo trying. The plasma vortex uses air plasma as its ammo and produces a large field effect. This gun will stop firing only if it runs out of energy. Because the vortices rise, multiple shots can produce a vertical area of denial. As opposed to projectiles there is less possibility for collateral damage from the plasma vortex when used in a built up area like a city. Sometimes windows break if you can pin a drone against a building with a plasma vortex.

Plastic drone parts hit by the plasma vortex will melt and malfunction. At higher altitudes, the vortex (mostly just hot gas by then) is much less dense than the surrounding atmosphere, and the drones lose lift, fall and tumble. A second shot at closer range will cook them.

The developers of the plasma vortex gun were not pleased to see their device used for riot control but it works well. If you are a rioter, a cloud of flame rolling over you will not kill you. You can see it coming and you will close your eyes. But your clothes might catch fire, hair will definitely catch fire and you will get first and possibly second degree burns on exposed skin, if you are foolish enough to go rioting with flowing locks and your face showing. Mostly it is really scary to have a swirling wall of flame bear down on you, and it is enough to cause all but the most devoted rioters to flee.

I think this would count as I am proposing very very high rotation rates and very high electric charges.

The gun could utilize some immensely strong materials formed into a small perfect disc shape. This disc would then be given a very large electrostatic charge, positive on the rim and negative in the centre or vice versa. It would then be spun up to an extreme rotation rate such that the materials strength was more or less overcome and it was only held together by the electrostatic charge across its surface.

This projectile would then be ejected from the gun using electrostatic repulsion and or gas pressure. On hitting the target the equilibrium of the disc is disrupted and all the rotational and electrostatic energy pent up in it is released creating a small cloud of plasma out of the disc and its immediate surroundings.

Specifically, the objective of the program was the acceleration of a toroid of 0.5-2.0 mg plasma to a kinetic energy level on the order of megajoules using a 5-10 MJ coaxial gun design.3

The program was classified in the mid 1990's and has essentially dropped out of sight since then.

Details are scarce, but it seems that the intent was to create a high density "smoke ring" of plasma that would retain its cohesion through internal magnetic fields (i.e. be self supporting) and accelerate the plasma smoke ring to velocities approaching 3% of the speed of light. At that speed, the kinetic energy alone would be on the order of 2kg of dynamite, and the plasma would also induce:

rings of plasma and balls of lightning exploded with devastating thermal and mechanical effects when hitting their target and produced pulse of electromagnetic radiation that could scramble electronics, the energy would shower the interior of the target with high-energy x-rays that would potentially destroy the electronics inside.[5]

Unfortunately, the main reference is a very short Wilkipedia article, which only provides very limited understanding of what the USAF was trying to achieve. The reference to using the Shiva Star capacitor bank to energize the experiments suggests that any "real" plasma weapon will be a huge energy hog, so plasma pistols or rifles would be well outside of the bounds of possibility, and even vehicle mounts would require massive generators or capacitor banks to operate.

So far as I can tell, what is being described in the OP's post could be "macrons", essentially tiny blobs of matter small enough that they hover between the boundary of individual molecules and macroscopic matter. A recent post on "Tough SF" discussed this, including how various forms of macron accelerators might work. "Nuclear" macron rounds might be achieved by essentially filling a "buckyball" (C60 shpere) with frozen deuterium and slamming it into a target at 100km/s, triggering a fusion reaction upon impact. While a single macron with a microgram of D2 would only register as a pinpoint flash, a stream of hypervleocity macrons could create a large fusion reaction (and plasma) so long as the rounds are impacting a hard target.

This would also be rather large (like a metalstorm launcher with multiple barrels) and would really only work well in the vacuum of space. 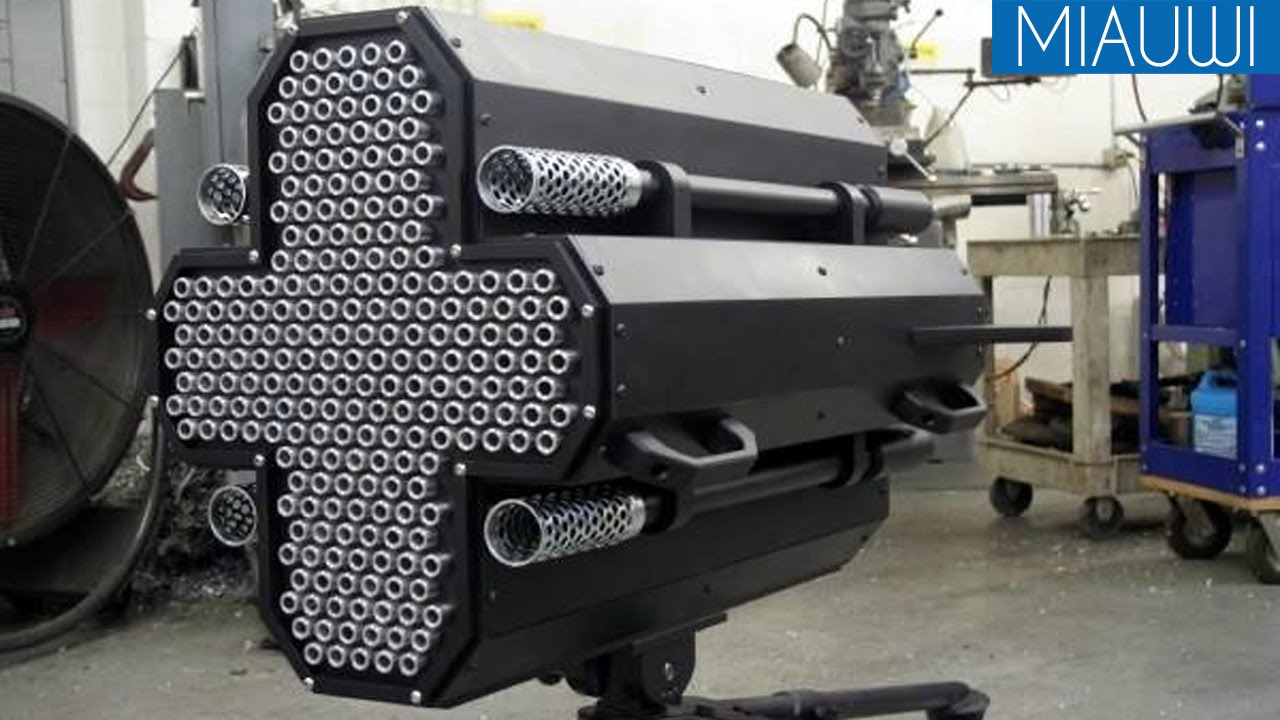 A macron launcher would resemble a volley gun

So there are at least two "real world" concepts of a viable plasma weapon out there, but their practicality is limited by size, energy requirements and the need to fire physical projectiles in a vacuum

Not the answer you're looking for? Browse other questions tagged science-based reality-check weapons .

16
Handheld weapons, plasma vs. laser
9
Airship Aircraft Carrier Dimensions
38
What kind of realistic ranged weapons would be effective in spaceship combat?
3
100% mechanical plasma rifle
15
How do you make a gun that shoots melee weapons and/or swords?
4
What would be the ideal way to weaponize plasma?
4
How would one contain and direct a beam of high energy plasma from a nuclear fusion powered gun?