Is there any plausible in-between of Endotherms and Ectotherms?

Someone in the comment section of my previous question pointed out the energetic problem of ectotherms with human intelligence (the brain needs a lot of energy). I still want to keep my lizardfolk restricted to warmer climates, as all the other suggestions just didn't work (lizardfolk don't have blood feuds, they aren't toads, and they have a more "human" respiratory system; all of that leaves Clint's Reptiles' endless list of things that Asian water monitors need and the kinds of diseases they can get as the best reason of them remaining in the background).

I thought maybe an in-between of ectothermic and endothermic temperature regulation would be a good way to have the cake and eat it (one half-gone, one remaining, balanced, as all things should be).

The question is if such in-between is possible and if yes, how could it work?

The term you may be looking for is "mesothermic". Mesothermic creatures maintain a body temperature above their environment, but it's not a stable temperature. There have been many animals that are, or were mesothermic. Sharks, Tuna, Leatherback Sea Turtles, and echidnas are all mesothermic. It's believed many dinosaurs were mesothermic.

You want your cold blooded "lizardfolk"* to have cold blooded heritage but to be active predators like badgers and be smart like humans. You could allow them to use muscular action to heat blood and then shunt it where it was needed. Several lineages of fish do this and some moths also. 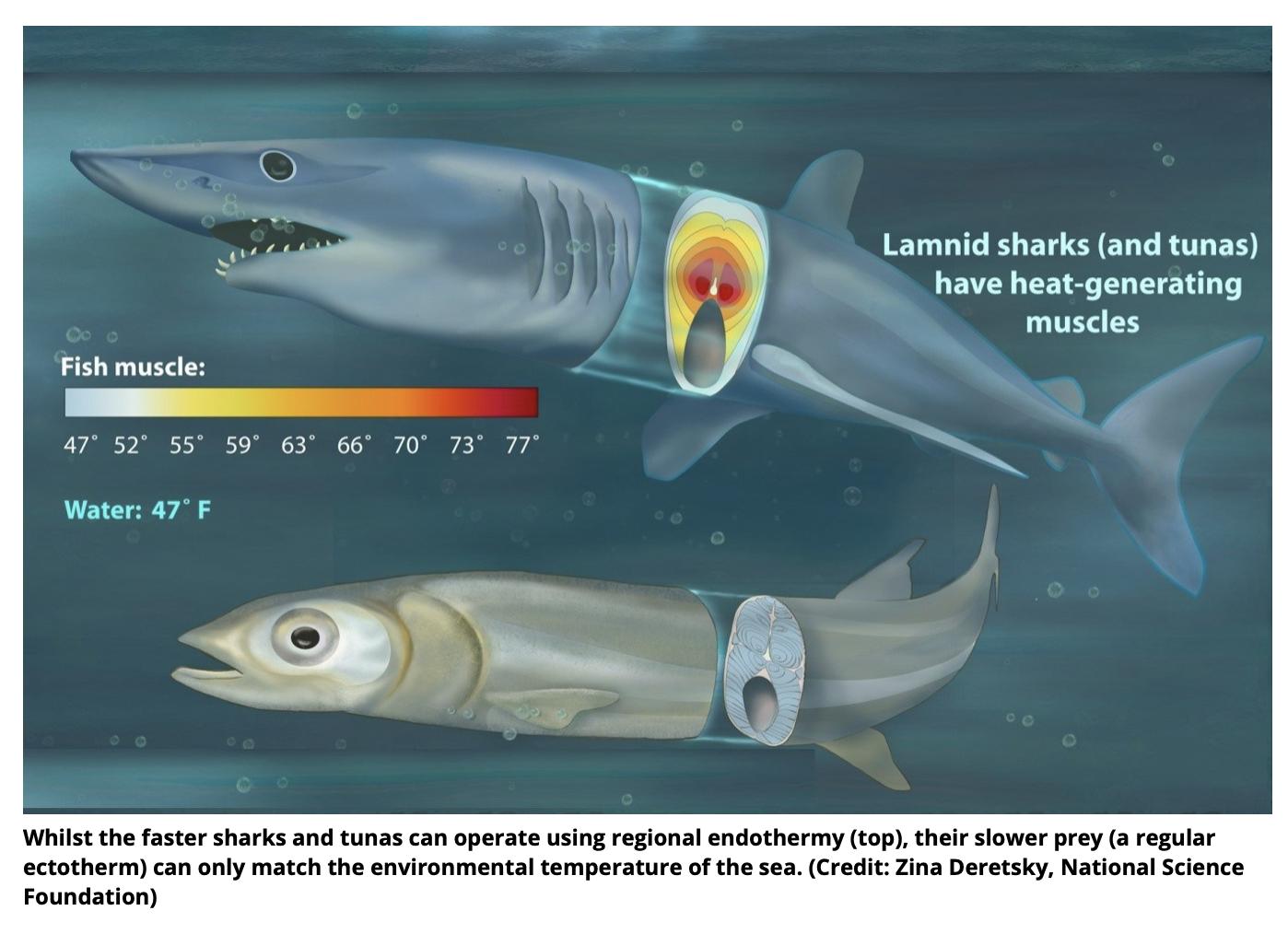 Regional endothermy is the ability of some fish lineages to maintain certain body areas at higher temperatures than the surrounding water by means of vascular countercurrent heat exchangers or specialized thermogenic organs. This adaptation involves an active mode of life and much higher metabolic rates than those of the ectothermic fishes of the same size... Here it is proposed that regional endothermy was present in otodontids and some close related taxa (cretoxyrhinids), playing a key role in their evolutionary history, allowing gigantism and the maintenance of active macropredatory modes of life.

In lazy mode they would bask, hang around, not doing much. But when there was something that required action comparable to an endotherm they could make it happen. They would generate heat using muscles and shunt the hot blood to the organ system needed. If it were for thinking then the brain. If for hunting / fighting then the muscles. If digestion needed to speed along then the guts.

Possibly they could do two things at once but for the story it would be interesting if they could not: thinking and fighting in the cold are mutually exclusive. When they get a chance they do their thinking first.

The possibility of this adaptation leading to gigantism also offers interesting narrative possibilities. I suspect that the largest saurian active predators must have had something like this. Monitor lizard get big too. Could Komodo dragons have adaptations allowing them regional endothermy? Yes!

*Re toad lineage: If your folk self-identify as Varanidae then it is rude of me to keep referring to them as toads. Lizardfolk too need to live their own truths and I apologize. But for purposes of understanding biology, sometimes genus-of-origin information can be helpful.

You’re asking the wrong question. What you want is a halfway house between homeothermic and poikilothermic, not between endothermic and ectothermic, and there are lots of examples. Endothermy is only one of three known mechanisms for homeotherms to regulate their temperature. In fact desert lizards are a good example, keeping their body temperature almost constant during the day using only environmental factors rather than body heat. See the Wikipedia article on homeothermy.

Everyone has made really great suggestions.

I think the stumbling block for your lizardfolk is for them to have human-level intelligence given their metabolic energy budget.

Lizards have brains now that provide them with the capacity to hunt, flee, seek shelter and reproduce. So it seems they only need a different form of brain cell for higher brain functions like cognition and deep memory.

So maybe they have mesothermic cerebral cortex. This structure -- it might be paired with a symbiote -- accumulates enough energy then mentation occurs until it depletes its reserves. Wherein the state of their mind remains constant -- like an abacus when no one changes it -- until they accumulate enough energy again. Then they start mentation again.

When they are enervated, the regular old lizard brain they have now is still active and keeping them alive.

The experience would be similar to being a narcoleptic when they run out of energy their conscious minds stop and resume later, they would have to accommodate changes in time, situation and location.

The chemical processes of their high brain functions would be very different, and I couldn't begin to describe a plausible mechanism for this to work.

You only need homeostasis for the brain. You could give your lizards a symbiotic infection for a separate carapace creature that regulates body temperature of the brain region. The lizard can not regulate the temperature for the rest of its body.

Not the answer you're looking for? Browse other questions tagged science-based creature-design temperature or ask your own question.

5
Lizardfolk are too OP, what weakness would make the most sense for them?

17
Would a planet with very small temperature variation (between 17 and 21 degrees Celsius) be possible?
2
Is there a plausible way to exchange matter between spatial dimensions?
9
Switching between poikilothermic and homeothermic metabolism
4
What is a plausible way to fuel highly active volcanism and seismic activity on my planet?
6
Is there any way to Terraform Ceres?
7
Are there any plausible 'alternative' methods of planetary formation?
3
Is there a plausible causal mechanism to explain why the Sun would be heating up faster/ sooner than we thought?
10
Plausible ways for the alien species to be able to impregnate every and any species?