Lizardfolk are too OP, what weakness would make the most sense for them?

So, based on their abilities, lizardfolk (humanoid reptiles) should be a more prevalent race in my setting than they actually are. When I say they're overpowered, I mean they have everything to expand their territory and resources, which is pivotal in a world plauged by naruto-running zombies with Wolverine-regeneration.

Just to give you a point of reference, let's take these three friends from one of my drafts:

You might be thinking, "Why not just throw Cocytus in to give those three a very bad time?" If you were to do that I'd finally have enough unspent CR to balance that encounter with a Bertholdt nuke.

Basically, I need a biological weakness that can't be solved with a hand-knit sweatshirt (body-temperature maintenance) or similar low-level technology, and would hinder all three species in combat, based on the already established facts (the list items). However, this weakness shouldn't make them too weak; defeating them still needs to be a bit of a challenge.

What would be the most likely weakness? (it can only be one oversight in their physiology)

if you are cold blooded, the sweatshirt won’t do any good. Because you’re not generating any body heat. You need an external heat source. This is going to be a major disadvantage against anyone not cold blooded.

As someone else mentioned, Keeping lizards outside of a tropical climate is very challenging.

Insulation is not enough: a woolly coat might work for your warm-blooded pooch, but your ectothermic iguana needs heat, ideally in the form of an infra-red lamp. If not heated, reptiles get sluggish. In winter, their metabolism slows right down -- an alligator's heart may beat just once a minute - and they undergo a form of hibernation. Unless they are living somewhere tropical, or have a good way of getting warm quickly and staying warm, they will have trouble competing with wily mammals. Maybe they rule the warm valleys while the snowy mountains are the domain of the warmbloods?

Breathing is a thing for reptiles.

Some reptiles must hold their breath during intense running. It puts a harsh limit on how far they can run.

So, if you saw your reptile buddy eating dinner, and you grabbed his fries and ran away, you might well be able to beat him if you were in good practice at long distance running. Corresponding strategies for military situations are fairly obvious. Humans could outdistance reptilian troops.

One thing that all reptiles, being exothermic, have problems with is temperature. Too little and they cannot move, and if there is too much they roast. A viable defense against the lizard people would be to set up large space-heaters around a defensible position. These would really mess with any that come close.

In addition, even if the heat is just right, reptiles have problems with running. You see, the reason why they are exothermic is that their cells do not produce much energy. As a result, they are limited to short (~30 second) sprints. Furthermore, they are completely incapacitated for several minutes after such a sprint.

TL;DR: while they would be extremely deadly at melee range, they would have problems with pursuits and temperature extremes.

EDIT: An alternative to space-heaters would be heavily air-conditioning the inside of your base. The transition shock alone should be enough to knock out any lizards that breach the perimeter.

A single human is not particularly scary, a bear, couger or wolf can kill one without too much difficulty. But a thousand humans can kill just about anything out there (excluding a larger group of humans).

The reason why they don't conquer the world is that they are too busy killing eachother because of ancient blood feuds. However if a leader were to emerge capable of uniting the many feuding tribes they would have an army capable of conquering the world.

You could make your lizardmen reptile-brained in the biological sense. That means they would have the following qualities:

Look at the evolutionary layers of the brain on a site such as this, and think about what would happen if the reptile brain took on greater emphasis while the limbic system and cerebral cortex had diminished importance. They wouldn't be lunkheads, exactly — still capable of rational thought and all the benefits that entails — but they would have a distinctly different set of priorities that would make them more powerful as individuals yet less powerful as a group.

They evolved as a K-selected species

Meaning, their current reproductive capabilities are adapted for an environment that can barely support their numbers; they reproduce slowly.

Prior to the "Naruto-running zombies"(?), each of the three lizardfolk species was saturating their livable territory, and eventually adapted to a relatively low-density equilibrium. After all, each member of each species has an extremely high survival rate due to their superhuman healing capabilities, but those same capabilities carry an extremely high metabolism. Their cold-blooded nature made it difficult for them to spread into other climates very quickly.

Members of the species tended to live to old age, and required significant resources along the way. As a result, the slower-reproducing members were selected for (they had an easier time supporting their relatively few offpsring, compared to their faster-reproducing brethren who had to support entire swarms of rugrats).

But everything changed when the Naruto-running zombies(?) attacked. The initial event devastated the populations of all three species, and they have been very slow to recover.

Like cane toads, lizard folk will try to mate with anything. 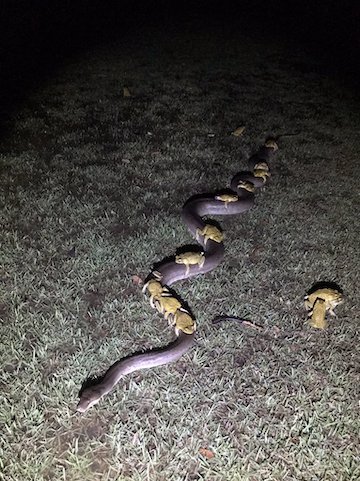 But in their quest to reproduce, cane toads sometimes get a bit overzealous. They have been known to try and mate with anything they can catch: male toads, human hands and feet, other species and even inanimate objects. On Twitter, Rowley shared an image of a can toad attempting to get it on with a rotting mango.

Your lizard folk are the same way. If a male finds something moving, or not moving, it will try to mate with it. Because of their great strength and power, the male is usually successful in its attempt. This interferes with the fighting ability of the male Lizardfolk, because their interest in fighting quickly is overpowered by their interest in mating.

Here's some weaknesses you can explore:

1- their ectothermic nature. Not only it means they can't be as active in colder days, they're relatively incapable of migrating to colder regions, also, funny enough, their metabolism gets slower the colder it gets, and you know what also slows down with metabolism? Your healing factor. The Nile croc may be strong and hard to beat, but if you throw water at 32 F at it it will be basically helpless to do anything that requires metabolic activity, and since they don't have what it takes to conserve heat, your sweatshirt won't be more than aesthetic.

2- their minds. Unless your reptiles somehow developed the mammalian brain parts, their brains aren't that different than a souped up version of your average velociraptor's (remember, they were smart by dino standards, but a dog is much smarter than they were). In other words, their instincts are extremely prevalent still and they have poorly developed emotions. Even if they have rational intellect as developed as hours, if you know how to trigger their instinctive responses, they'll most likely switch from rational being to mindless animal.

3-(Nile kind only) their very Jaws. Sure, crocodilians have tremendous bite force, but that doesn't come for free, their muscles were mostly concentrated on the closing motion. In other words, once your Nile crocodile closes its mouth, a simple lasso will more than do the trick at ensuring they don't open again. Whether Their arms are long enough to deal with that is up to you.

4-if they're lizards they molt. Doesn't sound like a big deal right? That's not really a weakness, except it is. Many reptiles, especially snakes, tend to have worse vision immediately before shedding as the membrane that protects their eyes becomes clouded, being changed by another after molting, so your lizards might have a hard time seeing when their molting time approaches, and boy is it good when you can see better than your enemy. Also, not molting properly, which can happen due to stress might result in skin problems and inflammations due to the dead tissue.

Hope at least one of these was helpful

Not the answer you're looking for? Browse other questions tagged science-based creature-design medieval or ask your own question.

8
Is there any plausible in-between of Endotherms and Ectotherms?

3
What Mid-Life Triggers Make Sense?
13
Mass extinction because of too low CO2-levels
3
What plants would lizardfolk cultivate in this hostile world
3
Dragons are supposed to be glass cannons, what biologically possible weapon would be the most useful for them?
5
A good discerning visual feature for female lizardfolk
17
Would it make sense for animalistic shifters to have mounts?
8
Lizardmen and vocalization, which sounds are impossible for them to make?
22
Can the idea of licensed and trained adventuring parties make sense?
6
Lizardmen, gigantothermy, and the energy demand of resting muscles. Could it work out?