Rivers of lava are a staple of fantasy. But in the real world, lava flows are usually very short-lived phenomenons caused by volcanic eruptions.

Is there some plausible way on an otherwise earth-like world to have a naturally occuring river of lava which is several meters wide, several kilometers long and functions as a permanent geographical feature? With "permanent" I mean permanent enough that someone would draw it on a map which is still useful a couple decades later.

It's not completely impossible, but it requires some unusual conditions.

First: The 'source' of your lava river is always going to be an active volcano, by definition, but volcanos don't always involve tall mountains. There are also Shield Volcanos which form relatively low, broad rises in the terrain where the lava pushes to the surface. It's important to note here that lava doesn't always come from the top of a volcanic mountain either. The heat and pressure come out through the path of least resistance and while the top of a volcanic mountain may be where the lava came out LAST time, subsequent eruptions are as likely as not to come out through cracks and newly opened fissures in the sides of the mountain.

Second: You only get lava when an enormous amount of heat is rising up from the earth's mantle. Generally speaking this occurs in one of two cases: Either you have a 'hot spot' allowing that heat (and magma) to rise up through the middle of a continental plate like the one that's been continuously forming the Hawaiian Islands for the last few million years, OR you have a place where the continental plates are being pushed apart. Now, the biggest example of this is the huge volcanic rift that runs right down the middle of the Atlantic Ocean that's pushing Europe and Africa in one direction and the Americas in the other, but another good example is the Great Rift Valley in Africa that is currently in the process of breaking Somalia off from the rest of Africa and forming two new continental plates.

Both of those examples have historically had occasions of very long-lasting continuous lava flows primarily because instead of going through cycles of cooling and heating where pressure builds up over centuries or millennia to a catastrophic eruption, these volcanoes have a continuous supply of lava constantly rising to surface.

So, all of that basically means the following. To have a river of lava that persists for decades what you need is an area of continuous low-grade volcanic activity that's near the sea, to allow somewhere for all that lava to go instead of building up a big mountain right there. Kilauea isn't venting lava like this right now, but it has done in the past, for decades at a time. You could also get a similar sort of condition from the African rift valley if Saudi Arabia weren't in the way holding the two plates together at the north end.

The main thing is that it's not going to work if you want your river of lava to be out in the middle of a desert somewhere or something. It has to flow into the ocean, and it can't take very long to get there, or the lava will cool and it'll just start forming a big blobby mountain instead.

you just can't have a steady state lava river, the shape of a river means the lava is cooling which means the river is getting smaller so even if you feed in more lava it follows a different path.

Lava Lakes however are a real thing and steady state lava lakes can exist for centuries because the lava can circulate and get reheated as it cools. Although you will want a lake with some gas to keep the lava moving the most. Basically the lava will swell, spit, and sink constantly, this will also give you a nice roiling effect.

Erta Ale for instance has been active for over a hundred years. 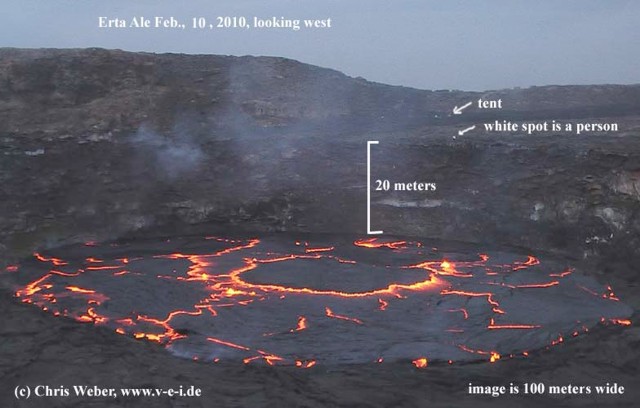 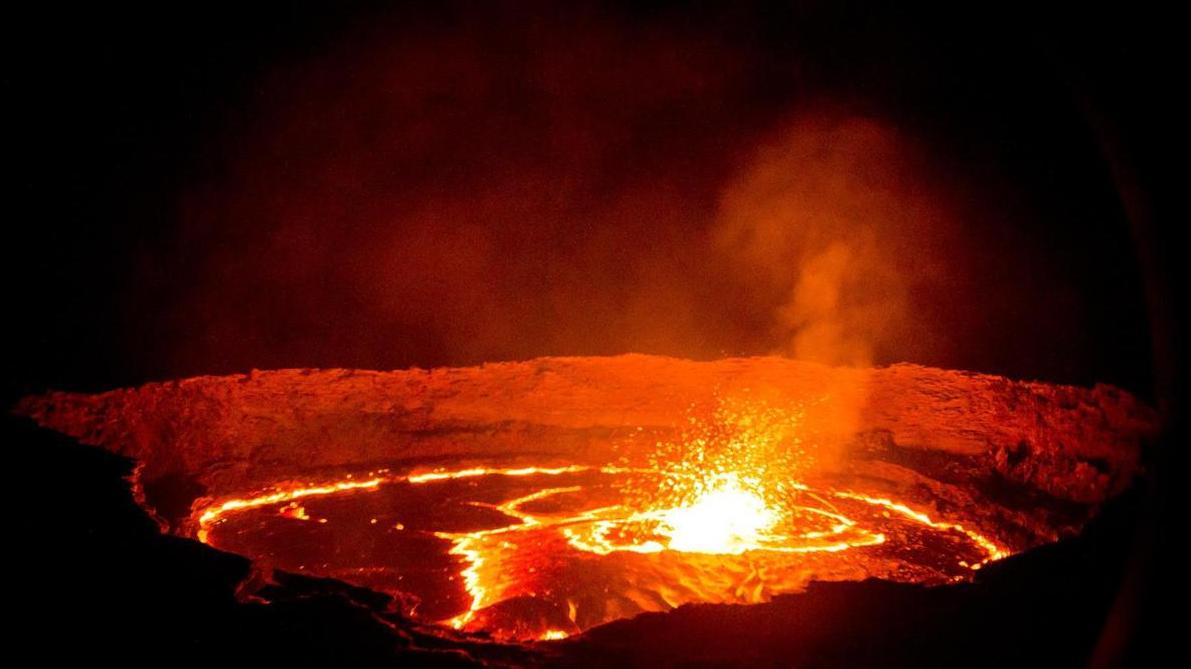 Note: keep in mind a visual marker for "lava flows here" would be a perfectly valid thing to put on a map in a valley prone to lava flows, it just is not a indication of a permanent structure, as much as "this area is prone to lava flows" plan accordingly.

Not really. There have been tons of long lived lava flows in history, but they dramatically alter the land. Lava cools as it flows, creating layers of solid rock that build up.

This happens on volcanic islands where the lava can flow into the ocean, expanding the size of the island.

Lava flows exposed to air will cool and form a crust over them while the hotter lava continues to flow underneath. This can make really cool lava tubes, but prevents standing rivers from really being a thing for long.

Your best bet is to have really, really fast flowing lava that has somewhere to go. So a tall volcano with a well established channel (maybe a lava tube with the roof caved in) that drains into an ocean could work well enough.

Lava that cools never has time to form solid sheets / gets broken up by the turbulence and gets carried out to sea.

Your island will have grown considerably in a decade though.

This "river" does not actually flow - rather it is static. Within its impervious rocky banks, the molten iron comprising the river extends down to the mantle, and the conductivity of the metal means that the vast internal heat of the planet can keep the metal molten. Perhaps the metal is at this surface position because of an ancient meterorite impact, or maybe the molten metal has been squeezed up to the surface.

This sidesteps the problem of continuous flow and offers a solution to produce continuous heat and permanence. Convection currents within the metal would make it stir and eddy. Parts of the surface that cool from contact with the air would sink down into the depths and be replaced by hotter metal from beneath.

The molten metal is a good resource and there are industries along the banks that gather and process the molten iron into useful tools and building materials.

Some time ago, the mountain got a lot bigger, and either had one side fall over at the beginning or evolved a channel to the side as it crumbled.

Crucially, there must be significant height to drop lava at the end of its channel, or it will pile up and you won't have a channel anymore. The new lava pumped up from inside must be insulated on most sides in the mountain, with one big exit. Real world lava flows tend to form crusts if they slow down and cool, so your channel needs to have significant steepness.

As with all things worldbuilding and writing, it's just up to you to decide how much you want to bend reality or play with the rules.

My personal route, in an otherwise earthly scenario, would be to say that the rock simply comes out of a volcano and travels until it solidifies, which could actually be a fair distance.

Some applications of this would be playing with the idea that the reason the river continues is because people harvest the cooled rock and refine it/sell it.

Or, if you really wanted to get creative, you could always say that the river somehow deposits back into the mantle, thus a technically never-ending cycle.

Not the answer you're looking for? Browse other questions tagged geography geology lava or ask your own question.

15
How can two persons orient themselves without a compass in an environment without sun, stars or remarkable landscape features?
10
Underground Terrain Types / Biomes / Agriculture
6
What is the range of lava/magma viscosity on exoplanets; what conditions would have the least viscous lava lakes?
7
How would a half-steppeland, half-desert kingdom with only a single river function?
22
Is this coral lagoon geologically possible?
3
Would an deep sea lava river be feasible?
10
Walking across lava
2
Valles - a world of deep canyons, could it work?