Could a planet have a single source of wind?

I was creating a map of the air currents in my world, working back from the climates of the land (which I had already determined). (The world consists of one continent, similar to Pangea, with empty ocean covering the rest of the planet.) That resulted in this map: 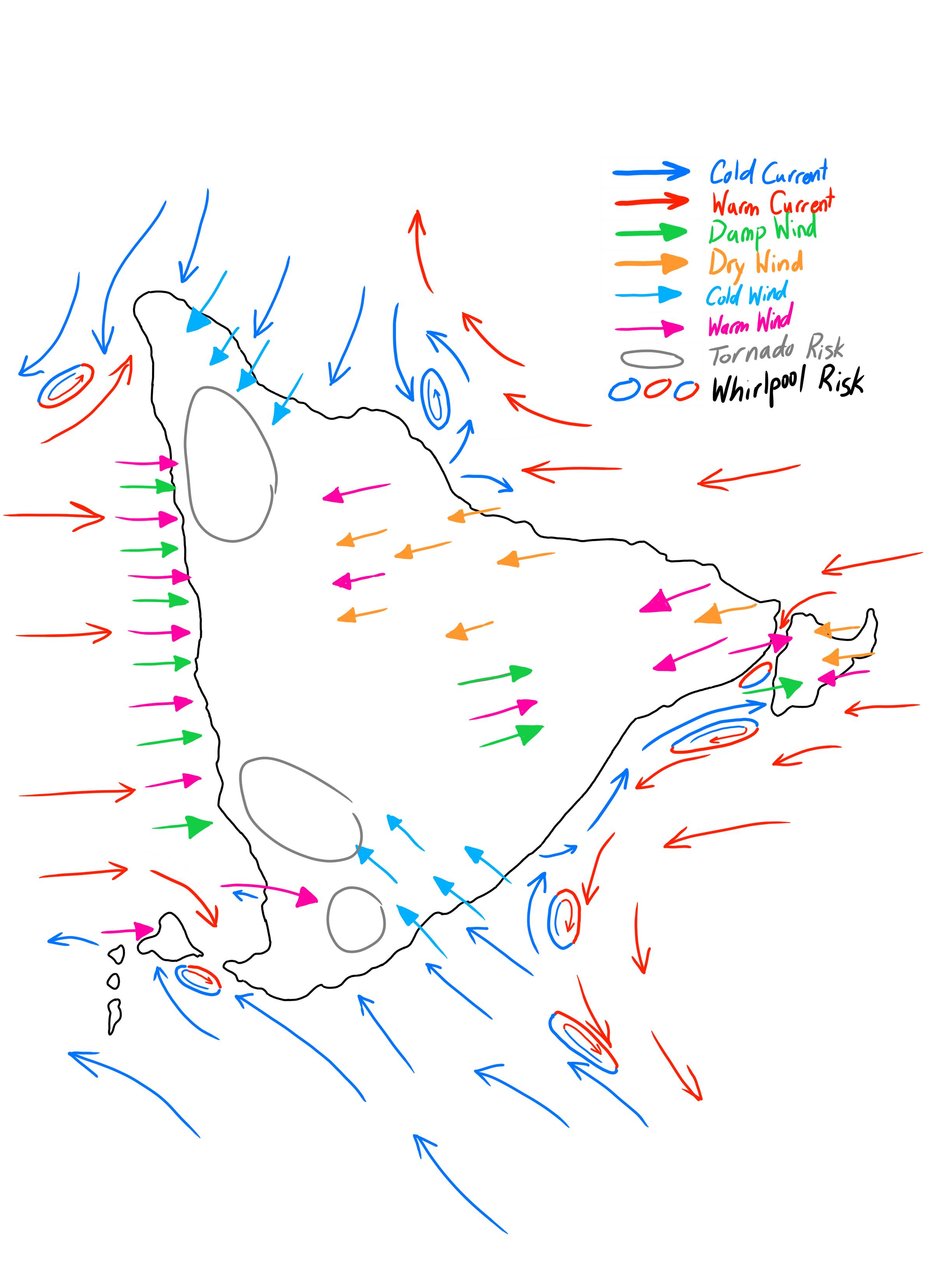 It took me a moment to recognize the obvious issue. On earth, wind wraps around the planet, largely flowing in one direction within different 'belts'. But here, though I have different belts of warm and cold air--this is appropriate, as far as I can tell--the wind moves in opposing directions within the belts, which isn't accurate. (You can see this by looking at the middle belt of warm air, which has clearly opposing winds, and the two patches of cold air assaulting the planet from the poles, also moving in opposite directions.)

The only way this could happen would be if there were some single point of origin for the wind, and the wind wrapped around the planet, moving outwards from that origin in every direction and circling around the globe to assault my Pangea-like planet from every direction.

What I want to know: is there some kind of origin that could produce this kind of wind? (The sun doesn't count, I need a point of origin that is on the surface of the earth, or at least in the atmosphere--the wind has to all come from a specific place. Also, the origin needs to be constant. The wind can't have been produced once in the past, then the origin never produced wind again.) Keep in my mind that I'm willing to accept fantastic explanations (although I'd prefer explanations on the believable side) so don't dismiss the question immediately.

It’s 3D rather than 2D. In atmospheric circulation cells there is wind moving in opposing directions, separated at different heights (often separated by heat layers, aka thermoclines). Winds also tend to circulate in jets, rather than spreading evenly across the planet. Other phenomena like differing heat absorption between land and sea leads to coastal winds that flip from sea breeze flowing onto land during the day to land wind flowing out to sea at night. So it’s pretty complicated. Prevailing winds are determined by a lot of different climate features and aren’t always predictive of the general patterns of wind at a location.

As a single point of origin for circulation cells, something to consider is the substellar point of a tidally-locked exoplanet (where the sun is vertically overhead in the sky and never moves). Some researchers have suggested that the entire atmosphere of a tidally locked exoplanet could be a single massive circulation cell moving upper air outwards in all directions from the hot side towards the frozen side, with icy winds blowing back at the surface.

Climate models for these kinds of planets have found planet-wide equatorial jet streams all moving in a single direction with momentum at high latitudes being pumped towards the equator. That’s about as close as you can get in nature to winds all being driven by a single origin point.

In fantastic terms, some of these concepts could be adapted to apply to pressure cells/outward winds driven by a colossal river of molten lava that separates a continent, a gyre/abyss that separates an ocean, or a ‘storm spire’ mountain/tower with a swirling vortex overhead driving upper air outward and sucking lower air towards it.

Roughly speaking, every enclosed region must have an equal amount of wind/water coming in and coming out at all times. Now, this is not literally exactly true (which is why you have high pressure and low pressure air regions). But in the long term, it should be true. A perpetual source or sink point would violate this principle.

That said, there is another interpretation of "source" point which would work better for you anyway. Take a look at the prevailing wind map.

Notice that wind moves in two layers, an upper layer and a lower layer, and it tends to circulate these with each other. So at the poles, you have hot air approaching the poles in the upper layer from every surface direction, which then cool and descend down at the pole, and then flow outward from the pole in almost every direction (except up and down). Since your continent presumably is only affected by wind at the lower level, this arrangement effectively gives you a source point of cold air. It should be at a pole, assuming your planet rotates in way similar to Earth.

Taking a simple 2D model it can't all start from a single point, because as the air moved away from that point the pressure there would fall and air would be drawn back in (wind flowing to your hypothetical source of wind). In 3D the situation becomes somewhat less constrained as air converging on a single location can be drawn upwards by convection, spreading out again at higher altitudes.

Having said that, the individual features on your weather chart don't look terribly unrealistic. You have onshore winds from most directions - these are a real phenomenon: the warmer land results in rising warm air over it, which draws in colder air from the surrounding sea causing onshore winds. At night, the land may end up colder than the surrounding sea and the situation is reversed resulting in offshore winds. Your ocean currents look reasonable except that they should circulate around an ocean, so as your world has a mono-continent the current arrows in the left-hand ocean should be reversed.

It's a bit odd that you appear to have dry winds emanating from the ocean on the E / NE side of your continent. If you can accommodate moving these so they originate from a hot desert then that would work better.

You may find it easier to draw a physically realistic wind / current chart if you constrain yourself to drawing closed loops, and then working out from the terrain whether the wind / current at any point would be warm or cold, humid or dry.

Wind directions on earth wide scale are fairly predictable and can be determined by knowing your latitudinal lines and you will need to identify five points of latitude: The equator, the tropics (30 degrees) and the Artic Circles (60 degrees).

From 30 degrees to 60, the winds will blow in the opposite direction, from West to East and from 30 to 60. Northern hemisphere will be upward curved and southern will be downward curved.

Above sixty, the winds will look like the Tropical winds and blow from true pole to sixty and again from east to west.

More locally, winds will blow from high pressure areas to low pressure areas always. This affects the wind closer to the ground, but the upper atmosphere winds will be bent by this as well, and will curve around Highs and towards lows. This is more dynamic and will change depending on the time of day and the where a high pressure system or low pressure system. For the map you're drawling, you should ignore these mostly, other than knowing it causes more localized wind patterns.

Cold air is denser than warm air and so winds also blow from colder to warmer regions. The geography of the land will not factor much in the way the winds blow but you should know where your mountain ranges are for proper desert identification. Deserts will be on the side of the mountains that the wind is blowing two (west in tropics and poles, east in temperate regions). They can also form if there is not any major source of water near where the winds form overland. Generally oceans will be sources of water.

Major storms (Hurricanes) will form over tropic waters and follow tropic winds as well as ocean currents. Currents are more predictable and will form in tropical waters and flow in the direction of planetary rotation until stopped by a continental shelf until it cools in the artic and then flows against planetary direction only to be deflected by continents.

Not the answer you're looking for? Browse other questions tagged geography climate weather wind or ask your own question.

5
Halfday planetary scan: what do you get?
5
How would a large arctic mountain range affect the weather?
4
What would pressure belts look like on a world with continuous land?
3
Weather Impacted By Extreme Magical Effect (Heat)
9
Determining Planet rotation period that would allow for global Wind Cell
29
Keeping an “hot eyeball planet” wet
6
Could ocean and wind currents form on a tidally heated body
3
What effect would exceptionally tall mountains have on high-altitude wind currents in an Earth-like environment?
5
Ring of storms around a planet