What would a toilet look like for a (paralyzed) humanoid with a tail?

This is related to How would a race of humanoids with tails design [vehicle] seats?; same universe, same humanoids.

I have a story involving a bunch of humanoids with tails (see prior question for specifics), with one scene where the POV character sees an "accessible" bathroom for the first time and is puzzled by the funny toilet. What does it look like?

For context, we first need to ask, what do ordinary toilets look like? It seems obvious to me that they ought to look like, well, these. Aside from the arguments that humans ought to be using these (modern westerners, specifically, as these are what historic people used, and many easterners still use), it seems that they wouldn't have the problems a modern western style toilet would have with tails.

The problem (and the reason why my POV character is surprised) with these is that they obviously won't work for some disabled people (those who are wheelchair-bound, especially, but even someone on crutches would have trouble), so there must be something different for such people. What is it?

Our goal is to design a toilet such that:

So far the best I've come up with is something like a huge pit with enough of a drop that the back of the seat can be open (to accommodate the tail) without this introducing a splash danger. However, while this might work for "pit toilets", the space requirements make it decidedly sub-optimal for e.g. a shopping center. Something that can fit on a second floor without disrupting the space below is strongly preferred.

Edit: I'd sort of prefer a non-magical solution, but on further consideration, I do have "kinetic" magic and if there is a brilliant magic-based solution, it would be bad world-building to ignore it. See How can I meaningfully define the energy cost of magical levitation? for an outline of the mechanics. Again, I think requiring magic to completely support the user's weight is sub-optimal, but magic could easily be used e.g. to hold the tail out of the way. (The tail still needs somewhere to go, however.)

Honestly, having the squat toilet you described with moving bars on the side might be the way to go if your character is paralyzed only from the waist down. I hope I'm not describing this badly, but think about it like an adjustable bar - it is at first positioned at approximately a wheelchair user's height, and allows the user to relocate their weight onto their arms as their arms are holding this bar. But as the user stands and then 'squats' slowly, they relocate their body weight onto the bar, pushing the bar lower till the user is at a proper height, similar to squatting. This would arguably use less upper-body strength than bars on the sides on public disabled restrooms require. This would solve/minimize the usability + splash-back problem that the user could have.

Another thing to note as you correctly pointed out is the tail. For this the simplest 'fix' is to have a small tail-holder to make sure the tail is out of the way. In your previous post you already mentioned how long these tails are so that should give you information about where they should be placed and how high this holder should be. I would consider also having 'straps' to hold the tail in place, but this could be a sanitary issue and vector for disease.

Below are three diagrams - the overall look of this toilet from above, the diagram of how the bars sort of work, and of the tail holder. Hope this helps! 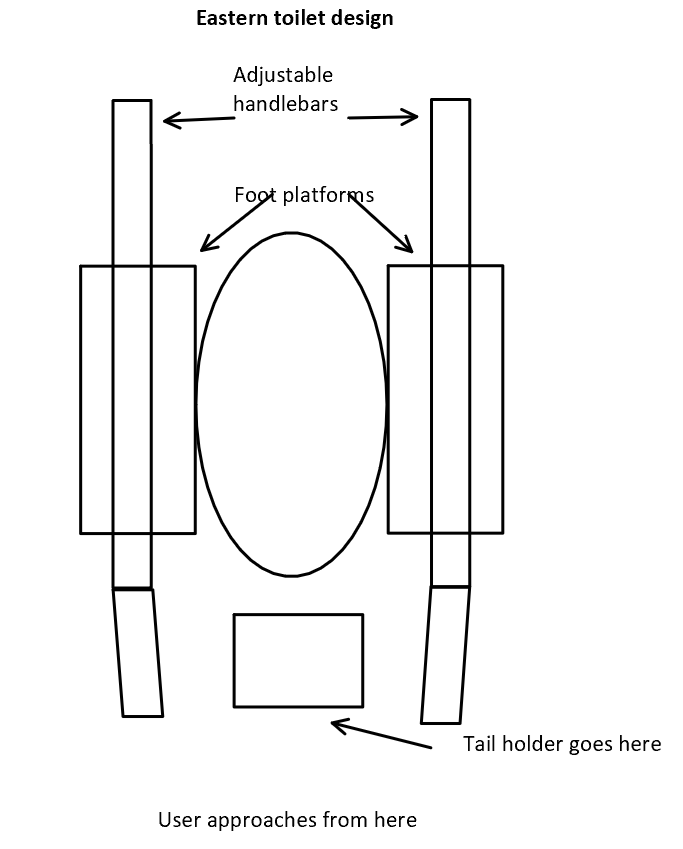 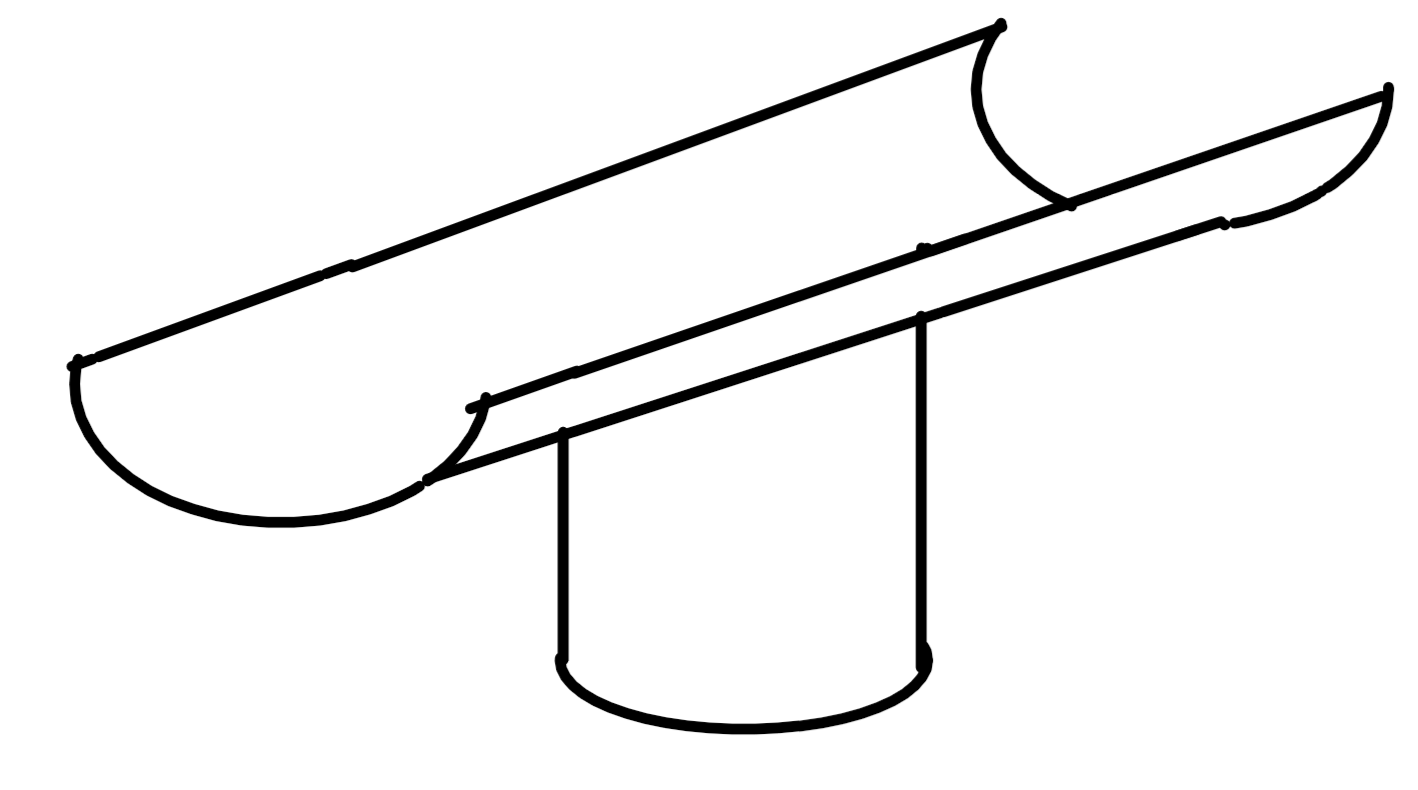 First off, thank you cyber101 for a really neat and inspiring answer.

Here's what I think I'm going to use, inspired by this video and cyber101 reminding me to think about the transfer bars. This is going to be on the overly-detailed side.

Q. How do we deal with the user's clothes?

I realized after asking the question that this is also a problem. For my needs, it probably won't matter, but it's important context that should be considered.

For humans, the consensus on the web seems to be "take them off first". For our people with tails, doing this while seated has the potential to be extremely awkward. For "healthy" people, I'm assuming that dressing is done standing up, such that dealing with the tail is rather like dealing with a third leg... not too bad. For someone sitting, this would only work if the tail is pulled between the legs, or if the clothes do not permanently wrap "over" the tail. We'll assume that our handicapped individuals either do sit on their tails (plausible) or else wear clothes that fasten above the tail, such that they can be removed without having to thread the tail through any holes. We'll also assume that they take their clothes (below the waist, anyway) completely off before getting on the toilet so that the legs are unrestricted. (This might imply that accessible restrooms will tend to have somewhere to set clothing aside.)

Q. how does the user get on the toilet?

Here is where the aforementioned video really inspired me. Combining that idea with cyber101's reminder to stick close to the design of regular toilets is how I arrived at the final design.

Okay, so the user's pants and underwear are off. The user moves his/her wheelchair so that it is directly behind the toilet and locks the wheels. The user scooches forward and spreads their legs to help guide his/her knees around the "seat". Then, using a combination of the wheelchair and the grab bars, the user slides himself/herself forward onto the toilet. The rails (lower parts of the grab bars) help guide the user's legs onto the lower supports. In addition to the side grab bars, a front grab bar is available to assist in this process.

The user may lean forward to assist in positioning of the colon for improved evacuation.

Q. So... what does this thing actually look like?

From the top, it looks a lot like a regular toilet. There is a similar splash guard, a gourd-shaped opening (wider at the back to maximize access to the user's bum, narrower in the middle for maximum leg support) and what looks a bit like feet supports. However, the support is actually based on a kneeling chair. The whole thing rises to chair height with a water basin. The back, however, has a dip for improved access.

Here is a picture with side, top and back views:

The front grab bar is shown only in the top view. The user's head/arms/feet are not shown. The tail is probably too short also, but only the base of the tail really matters, and tail lengths vary. Darker colors generally indicate greater distance from the camera plane. This isn't perfect, but should be good enough to get the idea across.

Q. How does the user clean themselves?

Here is where we see some of the why of this design. The open back is inspired by human toilets and is specifically designed to provide an opening so that the user can reach behind and wipe his/her bottom. Additionally, because the user's legs are spread and not pressed against the front splash guard, there should also be room for the user to wipe his/her crotch.

Q. What about the tail?

As shown, the tail should rest against the outside of the toilet and be more or less out of the way. However, my thinking is that either the user's tail will be partly supported by the wheelchair (which, recall, is directly behind the toilet), or else the user may elect to place his/her tail over the top of a leg. The latter is probably "optimal", and users can use their non-dominant hand to hold their tails.

Q. Can this be refined?

Probably. I feel like there needs to be some tweaking to help users get their legs up and onto the "seat", but I can hand-wave that in narrative. This is close enough for my needs.

Not the answer you're looking for? Browse other questions tagged furniture ergonomics or ask your own question.

24
How would a race of humanoids with tails design [vehicle] seats?
4
How can I meaningfully define the energy cost of magical levitation?
0
Online Anatomy Creator/Maker..?

4
What would centaur chairs look like?
19
What would a chair for a Human with a Tail look like?
24
How would a race of humanoids with tails design [vehicle] seats?