Could a material exist that is glass-like on the outside but spongy on the inside?

In my DND world, I've established that there is a substance that has these properties:

This substance can be used for lots of minor magical feats, so of course my players want to experiment with it, to see if they can get it into weapons.

When I designed this, I wanted a substance that could not easily be made into a viable weapon, since true magic weapons are extremely valuable in DND, but can be sculpted by artisans before being cured. That's where I got the idea of the outside becoming glass-like. The part with the inside being spongy is optional, if it just doesn't make sense. The idea there was for it to gradually get dried out on the inside as it's used, so that it only works for a period of time, creating constant demand for the stuff.

When I had a player ask about making weapons with the "dust", my initial thought was that it would be like mixing glass with metal, but that apparently can't be done. (Can You Mix Glass in a Metal Alloy?)

So, now I'm wondering if I can let them discover a scientifically sound way to get this stuff into weapons, keeping the short-term feeling of the original substance. But having the process be scientifically sound requires that the physical characteristics of the substance are able to exist in the first place.

Does (or could) a substance like this exist, and if so, what are its physical/chemical properties, especially pertaining to making metallic alloys out of it?

Existence: yes, it's even easy. It would be like meringue, only with the outside annealed (with meringue you can do it with a hot air gun. You need high heat and quick passes to melt the outside fast enough that you neither burn it nor calcinate the inside).

Get this stuff into weapons -- not so much. You planned good so it could not be weaponized, and, well, it can't. Not mechanically; any blade or armor would simply shatter.

Chemically you could do lots of things - have it explode, or it could be made mostly of some useful element to have in an alloy. Chromium or manganese or vanadium. Since it uses magic, it can do magic things like slowly transmuting into some useful element. Or it could magically migrate inside the lattice of a normal steel sword (hydrogen gas already is able to do this, except the effect is that of embrittling the steel; gallium and mercury can do this to aluminum, ditto; and so on), turning it into super-steel.

Maybe the magic ions composing the inner part of the lump can migrate and adsorb inside a pure iron lattice, then slowly transmute into carbon, vanadium and chromium in such a way that the lattice itself is stressed - creating the equivalent of a Prince Rupert's drop.

Sure. I suspect you have some of this on your person right now. 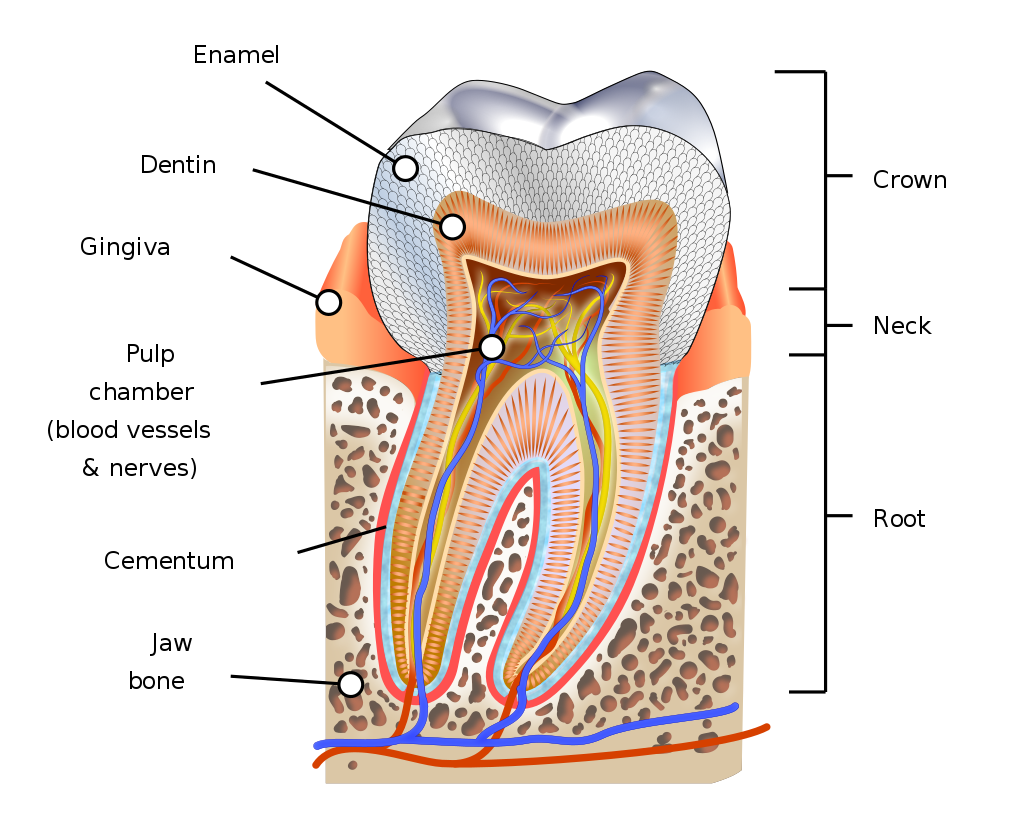 Teeth are covered with extremely hard semicrystalline enamel. It can chip and it can crack, but it makes a durable hard cutting / grinding surface. The underlying dentin is porous and spongy.

You could use a tooth as a weapon. Lots of animals do. As regards augmenting a tooth with metal that is routinely done as well.

As regards regenerating the hard glassine outside layer that is a tooth issue for which I cannot find a solid answer. I would think the live cells within the tooth could regenerate the enamel to some degree but I could not find proof that is so. I could imagine that a weapon or tool might have this hard outer layer regenerated by a repeat heat treatment, remelting and resolidifying the glass. If some of the interior nonglass dentin turned into glassine enamel during this, the tool as a whole might shrink slightly with each regenerative treatment, this shrinkage limiting the number of regenerations possible.

Teeth are alive. If there is magic (and D&D has magic!) that could be a cool twist. Maybe your mineral things are actually alive - living teeth - and can be fed, grown and coaxed into new shapes. Or used as a tooth if you are missing your own or want better ones than nature gave you.

I feel like the question you're really asking is if someone could use a substance like this to create exceptionally sharp blades without having them shatter like one made of pure glass would, the answer is no. The surface layer would shatter and even if the blade stayed all in a piece, it'd be warped and your edge would be gone.

There's basically no material humanity is currently aware of that has superior qualities when it comes to being made into an edged weapon than steel alloys. Anything that can hold a sharper edge than steel can is MUCH more prone to impact damage.

Now, that said, you COULD have a substance that behaves like what you're describing. Basically imagine a lump of clay that forms a very hard, brittle surface layer on exposure to oxygen.

You could make some really nice ceramic tableware this way, but I can't think of any useful military applications.

Not the answer you're looking for? Browse other questions tagged science-based reality-check materials or ask your own question.

2
Can You Mix Glass in a Metal Alloy?

14
Glass rot - could we survive it?
6
How can a substance that doesn't follow the laws of physics look and feel like ordinary matter?
1
Creating an exoskeleton/shell for a creature living on an Earth-like planet with specific properties
11
Feasibility of an 'Oxygen Radiation Zone': a non-pressurized natural formation on Mars that provides suitable atmosphere
7
Can there be substantial darkness?
8
Sword that is limp when in sheath, and hard when drawn?
1
Can Particle Decoupling Weapons exist?
2
Clear Waterproof Material in the Dark Ages