How cold does it have to be to freeze a waterfall

I want to freeze the waterfall and part of the coast during the winter. I understand this is very possible. So my doubts are:

I have some ideas about it, and I am researching for examples on real world, but I would like to know what you think about it.

How cold does it have to be to freeze the waterfall?

Obviously, below freezing. The colder it is, the faster the water will freeze. Depending on the size of the river and the brightness of daytime sunshine, it might have to be a long way below freezing.

This waterfall (Kinder downfall) froze during a period of slightly-below-freezing weather, after a slightly-more-freezing night (only about -6° Celsius or so) but it doesn't deliver a huge volume of water and it melted in the sunlight later that day. Conversely, a more substantial waterfall like Niagara Falls remained partially liquid even at -17° Celsius.

Have a read up about ice climbing, which often involves frozen waterfalls.

If the waterfall is frozen, must the river been frozen too?

Quite possibly, but remember that liquid water flowing over the icefall can then itself freeze. This is how icicles form... they don't just spontaneously materialise as huge spikes of ice, but form as liquid water runs down small icy areas and freezes itself.

If everything is frozen, were are they going get water?

In big rivers and lakes, you'll get water under the ice. Bash a hole, scoop it out. It may also be possible to get food from lakes and rivers too, via ice fishing.

Wells will still work too, as the freezing line won't penetrate too far into the ground unless you're actually in the arctic permafrost.

You can always melt ice and snow over a fire.

If everything is frozen, is it possible to use the river like a highway for sleds

If it is big enough and frozen enough, sure. At river-freezing temperatures you may find that the snowpack is sufficient for sledging over pretty much anywhere, though rivers do have the advantage of being nice and flat and so make for good roads.

Note that it is possible for rivers and lakes to freeze without being traversable, though you'd hope that people who lived near such places and used them as means of transport would understand these things. A frozen surface on a plunge pool under a non- or partially-frozen waterfall is probably not a good place to walk over, for example.

The real important factors are the dimensions of your river, how slowly it freezes, how fast the water is moving, and how far your drop is.

Waterfalls do not just suddenly freeze in place, instead the surface of the river freezes creating a surface for the liquid water underneath to cling to as it flows under it and itself subsequently freezes. A wider, faster moving waterfall is harder to freeze because you must first freeze the entire top edge of the waterfall in a fashion that creates an ice bridge to build on. This makes narrower waterfalls more ideal. If you have a wider river, you will want many rocky outcroppings at the waterfall's edge so that you have several shorter ice bridges instead of one longer one. Otherwise your river will have more time to freeze depriving you of the needed flow before you can start building your actual icy waterfall.

Once you have a solid icebridge over flowing water, you get icicles that slowly form. The slower your water freezes the better because once the river freezes through you will eventually stop having flowing water to continue to build the ice up. A slower starting water flow is also better because if the water is flowing too quickly with too much volume, then it will melt the ice faster than the cold air can build it up.

As the icicles grow they will also become heavier increasing their odds of breaking and falling off under their own weight, ideally the temperature will continue to slowly drop as the icicles form strengthening the ice at the top so it does not snap will allowing enough water to keep flowing to continue to build the ice up. The longest icicles in recorded history were ~27 feet long; so, that is probably about the limit of how high an ice waterfall can be... however, if you have a multi-stepped waterfall, you may get a much larger ice-face from ice bridges forming at multiple points in your decent.

Is Your Waterfall Doable?

In short, yes but it is much harder if your waterfall is not shaped right or if it is moving too fast. In the examples below, the first waterfall has a lot more shelves and narrow areas to bridge making it easier to freeze. The second one would probably not freeze except under extraordinary conditions.

Speaking of extraordinary conditions, Starfish Prime's Niagara falls example demonstrates, several really good points about this process that I think deserves a little bit of extra attention. If you look at section (A) below you will see where an ice bridge formed and the waterfall is just stepped enough to get the multiple layers of icicles. Section (B) shows another mechanic by which larger faster flowing waterfalls can freeze where by the water at the bottom freezes and builds up. It is more structurally sound than hanging ice but typically requires lower temperatures because you need to contend with the depth of the water at the waterfall's base. It also tends to look more like piled up clumps of snow and ice and less like a "frozen waterfall"; so, it probably does not answer your question as well, but I suppose it can help compensate for a bigger more overhanging waterfall if it builds up high enough. 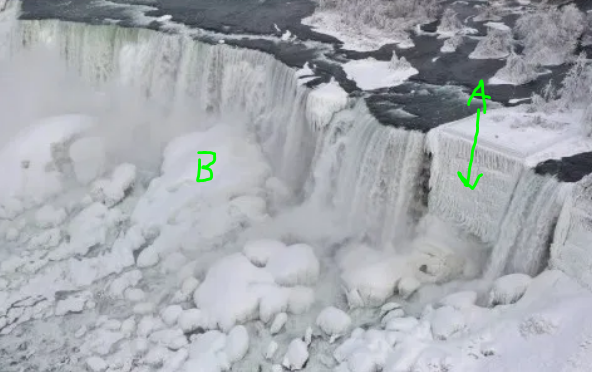 As for your related questions:

The main river does not need to be completely frozen for this to happen, but there will at the very least be patches of ice, probably along the shores and shallows. The middle, deeper parts of the river will take longer to freeze, but if you want the icefall to be around for awhile, it will need to stay cold enough that the river will eventually fully freeze.

In the event of a long term, full freeze, they can just melt ice and snow for water. Should not be a big deal.

If the ice is thick enough, yes you could use sledges to traverse it, but it has to get and stay pretty cold for a long time for the ice to get thick enough for this to be a good idea. The icefall would probably need to form at the beginning of a freeze, and they would need to wait days or weeks for the river to harden enough to support traffic.

It is possible, indeed. The temperatures have to fall below around -6ºC for the flowing water to start supercooling. After that, small shards of ice will start forming in the top of the waterfall (where the water starts falling), building and growing over time, until its height makes the waterfall seem to be frozen.

A waterfall can start freezing without the river being completely frozen, but if enough time passes, the entire waterfall will be solid frozen, and the river as well.

About the water issue, as @LiJun stated, they can melt the ice by using fire, or they can break the ice in the river to get the water below (remember that only the superficial layer of rivers will freeze).

And yeah, they could use the frozen rivers as highways for sleds, but it might be dangerous if the ice isn't thick enough (but if the waterfall froze, it is probably thick enough).

Not the answer you're looking for? Browse other questions tagged geography weather .

0
How might the tropics freeze while the poles melt?
3
How might a stone age agriculturalist who has never experienced significantly cold weather describe such cold?
5
How does planet size affect weather?
1
How to make my humans more cold-resistant?
5
How can Mars have life but still be "The Red Planet"
4
Cold Weather Patterns
8
How to have a landmass the size of Great Britain have almost every single climate